Happy Birthday, Google! Thank you for the 'Easter Eggs' that are Now the Coolest Party Tricks

"When is Google's birthday?"

On Friday, the universal teacher aka Google celebrated its 21st birthday with a special Doodle. The search engine giant, originally called “BackRub”, was founded on September 27, 1998, by two PhD students, Sergey Brin and Lawrence (Larry) Page, in their dormitories at California’s Stanford University. Thankfully, none of the serious or boring stuff will find a mention here because Google has, in its lifetime, been a hoarder of cool tricks and easter eggs - something you probably never knew existed.

That's why we are here.

Here's an extensive list of "cool hacks" that you can use as your next party trick to pay homage to your 24*7 companion.

Your search page will do a 360-degree barrel roll. Why? Because it can. Try it here.

The entire google search page comes tumbling down. Yet, it's still pretty much functional. Try it here. Sir Isaac Newton will be happy.

Google Space does the same, except, there's no gravity.

Tiny circles appear on your search screen and attack everything in its path when you google Zerg Rush. And you have little time to save the world. Too blah? You can also do more interactive activities by playing the classic, good ol' games right on your browser.

Who doesn't like a game of snake? PS: Don't try this at your office. It's highly addictive. If Pacman is how you wish to kill time, here you go. 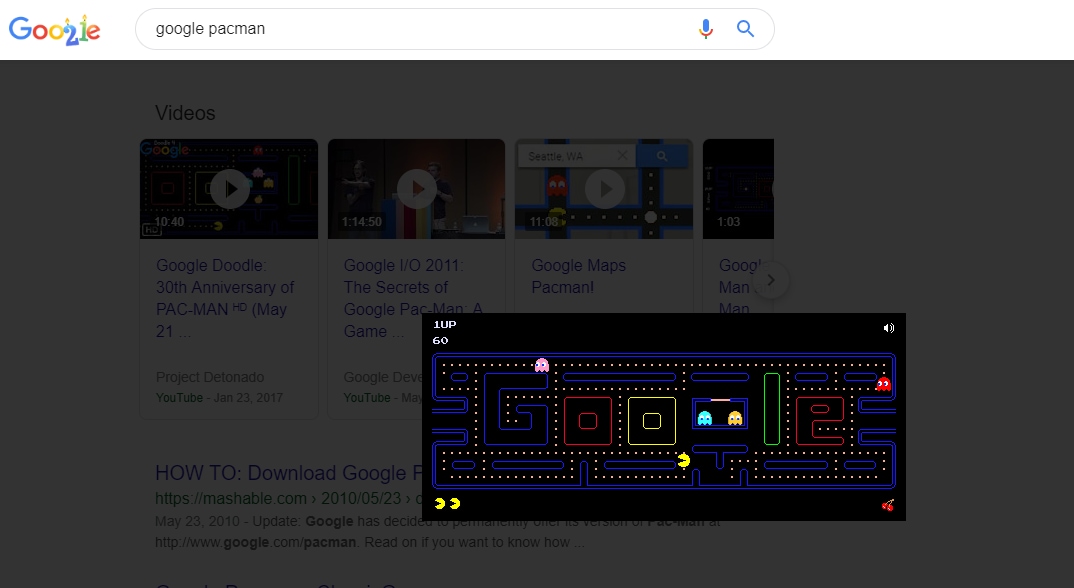 All work and no play makes Jack a dull boy so try Atari Breakout.

You can also try Minesweeper, Solitaire, and Tic-tac-toe. You're welcome.

Internet's down? Google still has you covered with a nifty, black and white T-Rex game. Simply press the space key on your keyboard to get started.

Coke or Pepsi? Pizza or burger? Goa or Manali? Bat or ball? Simply flip a coin with your friends on Google. 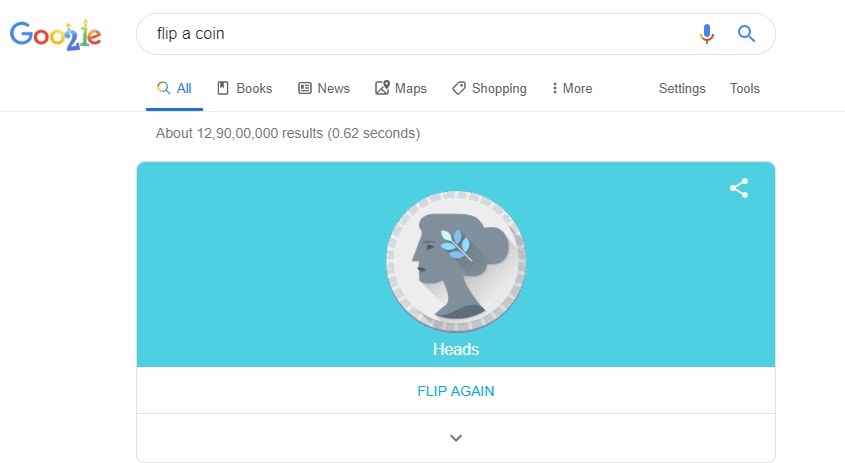 Similarly, you can roll a die using Google. Or pick a colour. 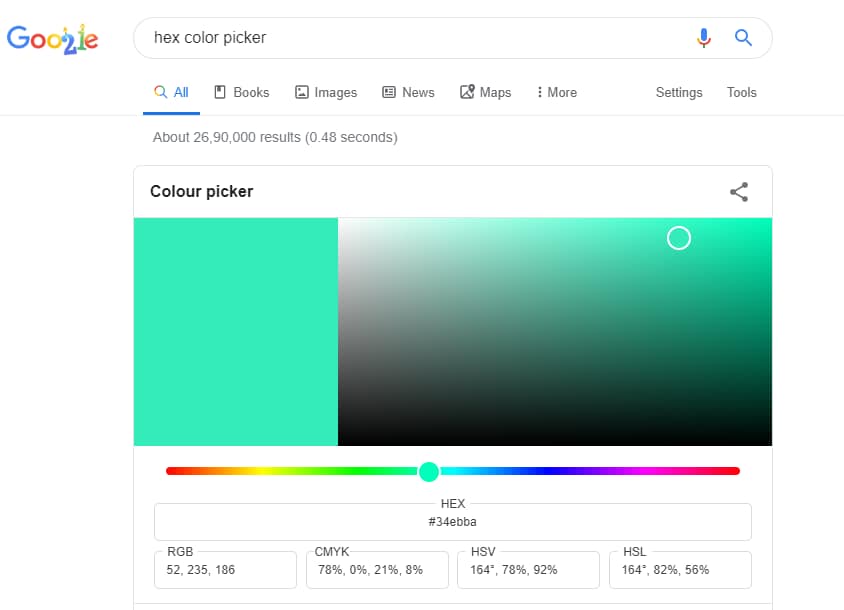 Tired from trying all the above tricks? Simply meditate on google. 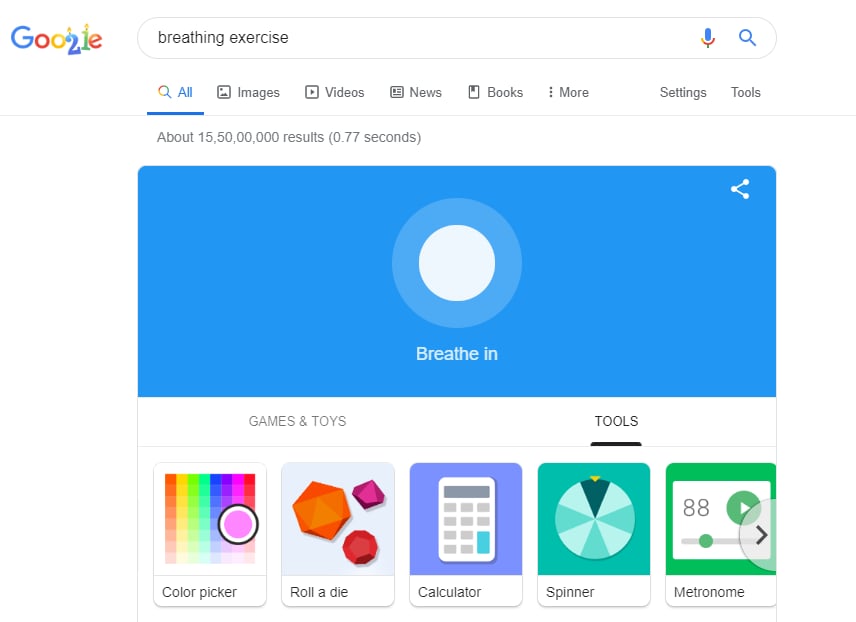 Recursion (n): the repeated application of a recursive procedure or definition.

What happens when you google "recursion"? Well played, google.

And "anagram" does exactly what it's supposed to do. An "anagram" search will anagram the "anagram".

Musicians can google "metronome" to improve their timing and rhythm by setting and practicisng on their desired tempos.

Once you're done picking a rhythm, just pick up a guitar. On google. Yep.

Google loves celebrating movie/show's anniversies, catchphrases and refrences from them by simply googling them.

Recently, the search engine giant partied with the Friends cast, celebrating the 25th anniversary of the cult American sitcom.

If you type the names of the main characters on Google, there will be a specialised icon just below their name on the right-hand corner of your screen. For instance, there's a sofa set for Ross, a bucket and mop for Monica, a wig for Rachel, pizza for Joey, a reclining sofa for Chandler and a guitar for Phoebe. This is what happens when you click on Chandler's sofa: 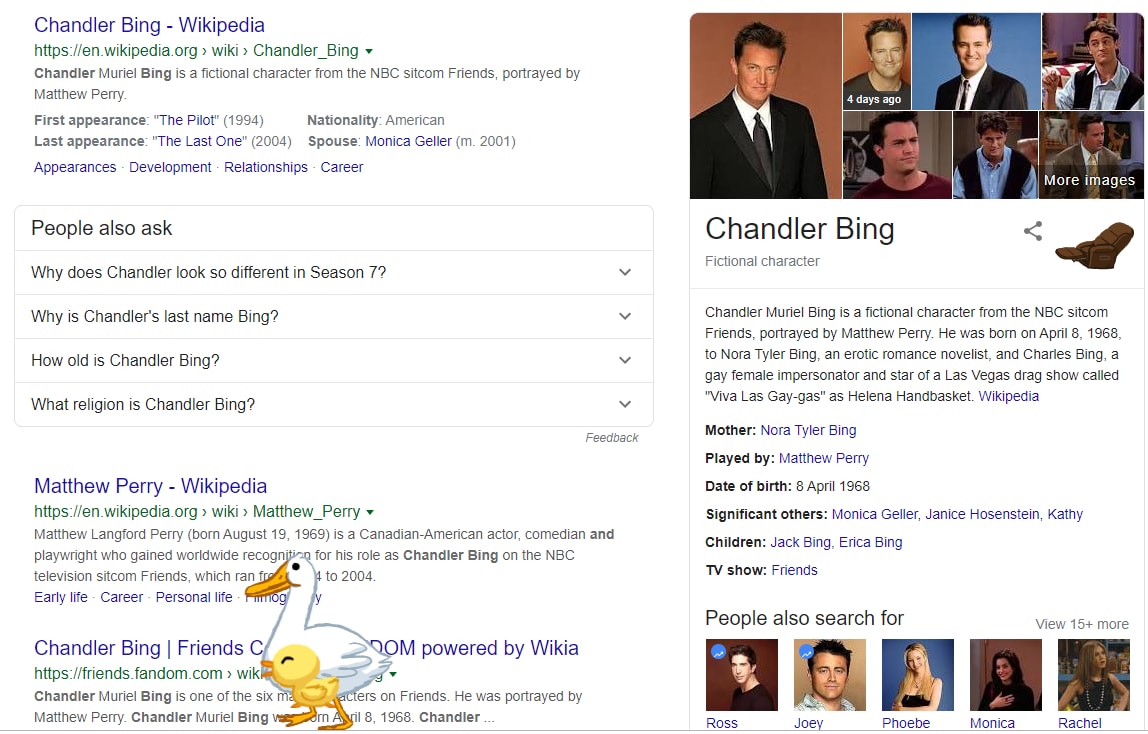 Earlier, Google caught on the hype train around Avengers: Endgame and introduced an easter egg to the craze as millions witnessed the Marvel superhero's final chapter.

Simply type "Thanos" in your Google search bar and wait for the search engine to decimate everything on the screen - just how Thanos likes it.

Thanos, one of the most powerful villains in the Marvel Universe, who has clashed with the Avengers, the Guardians of the Galaxy, X-Men, will proceed to destroy the search results that show up after you Google Thanos.

Once you Google "Thanos", the super villain's Infinity stone-studded gauntlet will appear on the right corner of your computer screen.

Click on the Inifnity gauntlet, and Google will proceed with an animation of Infinity Gauntlet snapping its fingers. And if you are a desi fan, Google has you covered.

Sholay gave us Gabbar Singh, the immortal villain. With him came the epic dialogues - some of which have even been used during elections and public cleanups, more than 40 years after Amjad Khan delivered them on the big screen.

Google lets you recreate one of the scenes of Gabbar Singh right on your desktop and phone screens. Type: "कितने आदमी थे (Kitne aadmi the?)" on your Google search box and it'll open a calculator giving the result as "2", exacting a scene from Sholay where Gabbar grills his dacoit army. And finally, if existential crises has hit you while scrolling through this article, simply google: the answer to life the universe and everything.

Cue: The Hitchhiker’s Guide to the Galaxy.

Why is 42 is the answer to life, universe and everything? Gizmodo's got you.

Of course, by no means this is an exhaustive list of cool things and tricks you can do using Google. For more easter eggs, just google it!