'Harry Potter and the Cursed Child': Probably a Great Play But Makes for Cursed Reading

A bicycle-taxi passes The Palace Theatre where the Harry Potter and The Cursed Child play is being staged, in London, Britain July 29, 2016. REUTERS/Peter Nicholls - RTSKAHQ

Yes, it is true that JK Rowling hasn’t singularly put her name to the book ‘Harry Potter and the Cursed Child’ so we cannot direct all our angst at her. But she has given us the world of Harry Potter in all its magnificent glory and we have been ardent fans for two decades, so there is much that needs to be said about the new instalment that doesn’t smell of her quill’s ink at all. Not a book really, the script to a play that is now being performed in London, Cursed Child has been penned by Jack Thorne based on an original story by Rowling. Potter fans have rued many aspects of the story and not without reason; some claim it hovers dangerously close to queerbaiting while others have criticized the writer’s lack of understanding of the amazing women of the wizarding world.

For us, the delicious detailing of characters, situations and plotlines have been amiss right from the first few pages. Trying to accept the script as the eighth and final story book has been particularly hard for us because simply put, the writing is subpar and consequently, the story telling is tedious. Infact it has absolutely nothing new to offer and rides on the super successes of its past events and characters. The Triwizard Tournament makes a comeback and not in the fabulous way we recall from the Goblet of Fire. Using time travel, the tournament is witnessed repeatedly through the voice of not a popular character but Ludo Bagman, the commentator who most of us hadn’t remembered much of.

The description of what exactly the characters from the future do after tumbling into the tournament isn’t clear and we are lead to believe the plans have worked exactly how the characters had hoped. The only bit that is interesting is that while their little plans work, the bigger picture gets ruined every time they meddle.

What is worse, the alternate realities make quick work of our favourite characters who are brought back from the dead for nothing but as gimmick. The reason for that may be simple - any Harry Potter play will do wonders with Dumbledore and Snape in it. It is known.

Without giving away too much, it seems the scene at Godric’s Hollow on the day Harry’s parents die is recreated only for hyperbole. Most of us have yearned to know more of the mysteries of the fantasy world we so love (the culmination of which is Pottermore), and that fateful day in October was right at the top of everything. That the scene plays out like a damp squib will be an understatement. The lamest of fan fictions could have done that night more justice than what the play runners have given us. 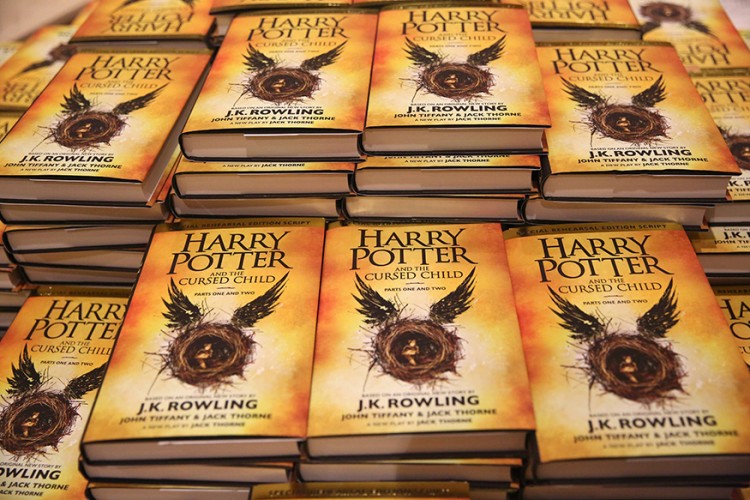 Copies of the book of the play of Harry Potter and the Cursed Child parts One and Two are displayed at a bookstore in London, Britain July 31, 2016.

Finally, the big reveal is obnoxious and hits every Potter fan hard – not because we didn’t see it coming, but because our understanding of one of the greatest literary characters ever written is undermined for some cheap thrills. This character, etched in our minds as all powerful, all evil but definitely as solitary as anyone can ever be, has been given a storyline that not only seems impossible but also forced. No wonder, the climax moves nobody, not even an old and long gone headmaster in a portrait.

Yes, the story has moved on, if you want to call ageing as a specific kind of change. Our darlings, Harry, Ron (oh poor Ron, what have they done to you?) and Hermione are given jobs and children to that effect. But none of the characters have an arc to mesmerise or worry us – sure, Harry isn’t acing fatherhood, particularly when it comes to his second son Albus Severus Potter and that is a grey area that the creators have explored. But trying to bring a father and son on the same page by using older, successful episodes via time travel with as much mediocrity as possible is hardly great writing.

The one thing that amazes me is how the entire play is being dramatized onstage, given its immensely detailed technicalities (read time travel, charms, spells and dementors) and given a chance, I would definitely give it a dekko. But here is the thing – it may and is doing spectacularly as a play. It simply doesn’t rank among the seven books by JK Rowling and definitely doesn’t deserve to be the last and final book to the story we all love to death.

If only the Weasley’s Wizarding Wheezes had something to burst this book into a thousand little pieces of Bertie Bott’s Jelly Beans. That would give us way more satisfaction than reading this book.