BuzzFix: How The Met Gala Became The Meme Gala Through the Years

The Met gala's first moment of virality, of something that 'broke the Internet' transcending the event itself. And it wasn't a dress.

You’d think it started with a dress, but it didn’t. The Met Gala has existed since 1948 – and what is essentially a fundraising benefit for the Metropolitan Museum of Art in New York City, which hosts stars, young creatives, and industry paragons has only in recent years found itself as much an Internet sensation as it is an offline event. By now, every time the Met Gala trends, bizarre interpretation of dresses, fashion accessories and sometimes people go viral soon after. The love for fashion goals and Who Wore What has become replaced by a need to compare the outfits to something else – and see if it really has a long-lasting impact on Internet culture. In some ways, if your dress has become a meme, you’ve made it. That’s the stand-out or highlight of the night. But how did a charity fundraising event get here?

What is the Met Gala?

The Costume Institute Benefit, which is now known by its more popular name, ‘The Met Gala’ — began in 1948 as a midnight supper that invited guests could attend for fifty dollars a ticket. It was the brainchild of publicity doyenne Eleanor Lambert, who dubbed it the “Party of the Year,” the event raised funds to support The Costume Institute and celebrated the opening of its major annual exhibition, The Met wrote about its history in 2018. Since then, the benefit has grown in size, scope, and profile, and remains the vitally important main source of funding for the department’s exhibitions, acquisitions, and capital improvements. In 1995, Anna Wintour the artistic director of Condé Nast and editor-in-chief of Vogue, and a Met Trustee—took over as co-chair and has overseen the party ever since.

While the parties of the Met Gala and the fashion that came with it was very popular in the fashion and art world, it wasn’t that common for the ordinary public to be as enthralled by it then. The celebrities who visited, their dresses were looked at, but it was treated with the same notion a New York Fashion week or a Paris runway show was – as just fashion. In 2014, that changed.

The Met gala’s first moment of virality, of something that ‘broke the Internet’ transcending the event itself. And it wasn’t a dress. It was low-quality footage from an elevator. Beyonce’s sister, Solange, attacking Beyonce’s husband Jay-Z in the elevator at the Met Gala. To this day, almost 8 years since the incident, it’s unclear what exactly promoted the fight. In the footage that surfaced on the Internet and became the talk of gossip columns eventually making its way to social media, the security tapes of the entire argument, which lasted only about two minutes, had found fame. Those two minutes also inspired one of Beyoncé’s most popular lyrics to date: “Of course sometimes sh** go down, When it’s a billion dollars on an elevator.”

The video footage was shared hundreds of thousands of times leading to speculations of what really happened, with rumours like Jay-Z mistreating Beyonce or cheating on her surfacing. While much before this some photos of dresses from the Met Gala had found their way to the general Internet and had become popular for a while, it was this footage of Solange arguing with Jay-Z on an elevator that really brought the event to public attention. The next year, more people tuned in to watch the show — primarily expecting some drama to go down. It didn’t. But the people watching it, did find some dresses to ironically make jokes and memes about – and then started a new trend: to watch the show to find something amusing about it, something more than just fashion or the cause, but something that attains Internet viral status. The rest as they say, is meme-stry. Err.. history.

Rihanna’s pizza dress was one of the first memes to really kick-off the trend of making memes out of dresses. Rihanna’s canary-yellow dress designed by Guo Pei, she served watching Internet sleuths meme-material on a deep-dish platter. From omelettes to pizza to fortune cookies, we found some of the popular Rihanna dress memes from the night.

Taylor Swift as a Hershey’s Kiss.

Zayn Mallik as the Winter Soldier.

But that year, perhaps Beyonce’s dress was the most meme-i-fied: It was also the same year she released a track which had a mention of “Becky with the good hair,” implying Jay-Z had cheated on her.

In 2017, the Indian addition to Met gala meme history made its first appearance, with Priyanka Chopra’s dress. From the top layer of chai to a tent, her trailing dress was compared to everything. Chopra being a sport, posted some of the memes on her Instagram.

While Rihanna ‘dressed up as the Pope’, Priyanka Chopra’s dress too made history once more.

Priyanka Chopra continued making meme material for the next year too. This was the year we found common objects masequerading as people at the Met Gala. 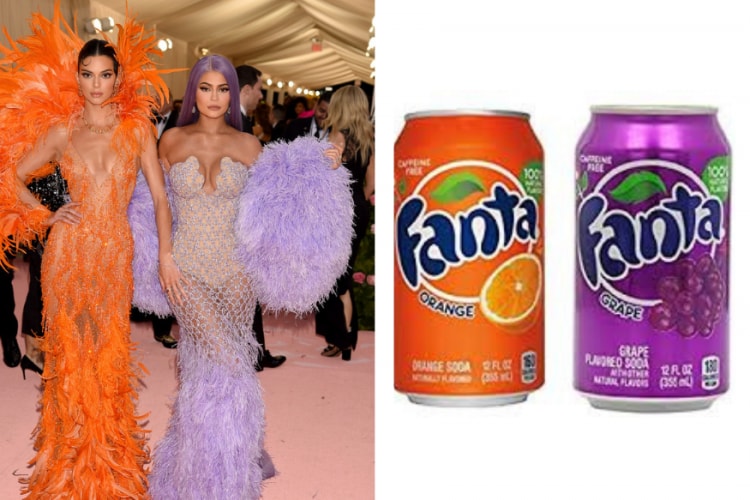 (Image credits: AP/Amazon) For the full set of common objects we found in 2019.

A special mention is also reserved for the OG dress that inspired memes – Kim Kardashian’s in 2013. Kim Kardashian’s floral print dress started memes of how it resembled a couch, from the print and the shape of the dress. While that dress had started the trend of dresses being meme-i-fied, it wasn’t until the Jay-Z Beyonce elevator video that went viral that truly started the trend of memes overtaking the actual convention. The convention, which was once just about midnight suppers and the charity has now become one of the largest publicity events in the world, with thousands of people around the world watching for the OOTDs and the memes that spark from them.