In India, Fake WhatsApp Forwards on Coronavirus are Spreading Faster Than the Disease

Even as the number of confirmed cases of coronavirus rises rapidly in the country, what's more worrying is the rate at which fake news about the disease is being spread on WhatsApp.

If it's on WhatsApp, it must be true. Or is it?

WhatsApp, India's most popular messaging platform, has been on high alert after the number of coronavirus cases in the country rose to more than 15,000. The epidemic has spread to more than two hundred countries since December, including India, and globally the number has crossed 2.2 million. The first case of Coronavirus in India was reported in Kerala, earlier this year and two more Indians were recently tested positive.

Soon after, Indians were bombarded with messages on WhatsApp which claimed to contain "helpful" information related to the disease, along with home remedies which could keep the virus at bay. A quick glance at the WhatsApp forwards that have come our way show that most of these messages try to explain what the deadly coronavirus epidemic is all about and are usually coupled with absurd and highly unscientific measures to counter it.

Take a look at this message, for example: The WhatsApp message claims that an "old Chinese doctor" had found a cure to coronavirus, and that's one bowl of garlic. But the WHO has clearly specified that there is no scientific evidence to study this. Bad news for those hoarding garlic cloves to fight off the virus. Just like vampires, the humble garlic has no effect on a virus that has already claimed over 3,000 lives around the world.

Or, take this one for example. Dr. William Schaffner, an infectious disease expert at Vanderbilt University, has debunked the claim that drinking water every fifteen minutes can prevent you from catching the virus. That is really not how coronavirus works. For those who've been drinking copious amounts of water just to ward off the disease, all this is doing is keeping you hydrated.

Another message on WhatsApp claims that consumption of Vitamin C will kill the virus even if you've contracted it. "Tell yourself and your children that they are all supposed to be HIV positive and don't touch anyone and don't regret it," the message reads in bold. Uh, no. While scientists in China are trying to understand if Vitamin C has any effect on coronavirus, there's no study to prove the same yet. 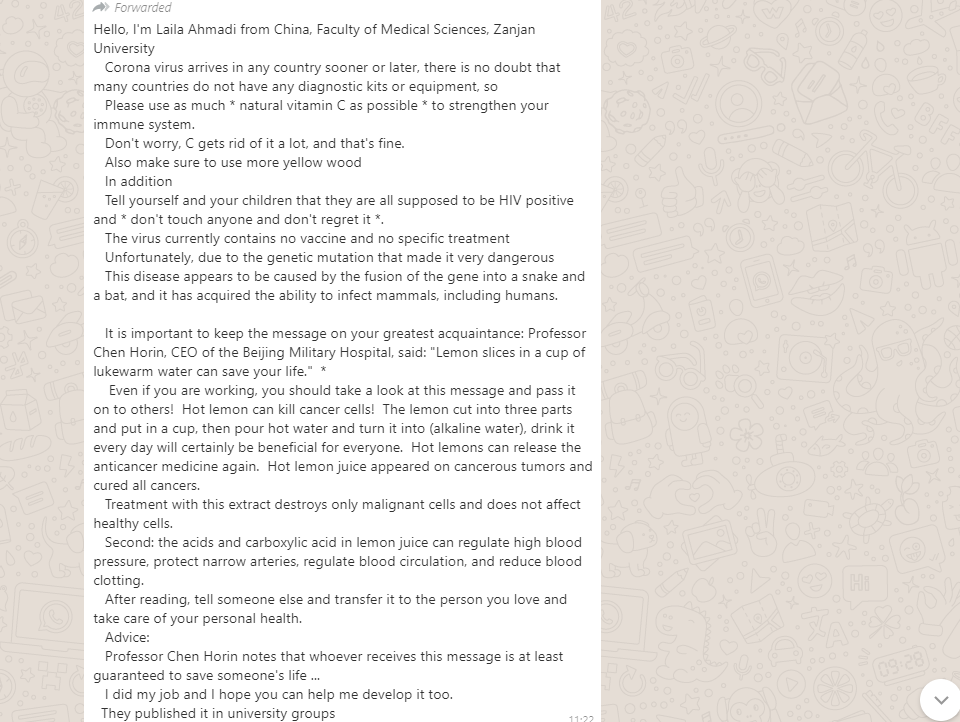 One of the most common misconceptions that have led to an "infodemic" of sorts on WhatsApp is the notion that masks can prevent coronavirus. Messages like these are to be blamed: It's probably because of messages like these that people around the world, and India, have resorted to panic buying of masks. People are stocking up on masks and sanitizers because they feel it'll keep them safe from the disease.

However, what these messages conveniently fail to include is that normal surgical masks won't do the trick. Only masks known as N95 respirators would come in handy. Similarly, your regular sanitizers won't really kill the virus unless there's 60 percent or more alcohol in them.

WHO has indeed issued a detailed advisory on what can actually be done to prevent the virus. For example, washing your hands frequently, covering your mouth and nose while sneezing, maintaining a 1 metre distance from someone who's coughing are just some precautionary measures the WHO has listed.

More importantly, the WHO asks you to read up on COVID-19, and actually keep yourself updated with the news. Maybe that'll be more effective than forwarding WhatsApp messages.

Apart from these factually incorrect messages, WhatsApp has also seen a surge in the obviously stereotypical jokes and memes. For example, there's this joke about Bengalis: And of course, there are marriage jokes, that borders on sexism. While WhatsApp may prove to be an immensely useful method of communication, it has quite the record as far as fake news is concerned. The reason? All it takes is one click to forward a message. Anyone with access to the internet and a smartphone can start a trend on the Facebook-owned platform and if the topic is sensational enough, it doesn't take long for something to go viral on WhatsApp.

Ironically, WhatsApp's parent company, Facebook, has introduced a ban on false information pertaining to coronavirus. But the same measures cannot be extended to WhatsApp owing to end-to-end encryption which means that the messages can be read-only by the recipients and the senders.

In India, the Delhi government has recently introduced guidelines which state that people spreading fake news on WhatsApp (which could directly or indirectly incite violence, lead to tension or friction and may contain false information) could land in jail for three years.

Are these guidelines really enough? The government urges users to report false information and those spreading it and even offers a reward in return. Yet, can that really stop panic from spreading faster than the virus? We highly doubt it.

The question arises, why do people believe or forward these WhatsApp messages even though they're so obviously fake?

A study conducted revealed that people are more likely to hit the "forward" button if they feel that the message they received is genuine - this also means they wouldn't stop to verify it. The same study also showed that younger people, who've grown up with technology at their fingertips, will probably refrain from sharing a message without actually checking its authenticity. Others, on the contrary, are only too willing to pass on information.

Even as the number of confirmed cases of coronavirus rises rapidly in the country, what's more, worrying is the rate at which fake news about the disease is being spread on WhatsApp.