U19 cricketers from the Australian squad had earlier 'mocked' the Indian accent in an Instagram post of Jake Fraser-McGurk.

Days ahead of the quarter-final match against India in the on-going Under-19 World Cup, 17-year-old cricketer and Australian opener Jake Fraser-McGurk took to his Instagram page to express his excitement over the much-awaited battle.

"Quarter Finals here we come!" Jake captioned the post along with photographs of himself and Australian squad.

The harmless post celebrating a cricketing event, however, left a bad taste among fans especially those from India when Jake's Aussie teammates decided to join him and drop in some distasteful and racist comments under his Instagram post.

The screenshot of the same later went viral on Reddit's r/Cricket, where cricket fans slammed the young team for engaging in casual racism on social media and seemingly mocking the accent and language used by Indian cricket team.

Explaining the comments made by them, one Reddit user wrote, "Reference to South Asian people showing their love, support and respect for foreign players in broken English." Basically, the comments were written in broken English by way of making fun of Indian plays (and by extension Indians), many of whom come from humble backgrounds and may not have had the privilege of receiving formal English education.

Australia's under-19 cricketers from r/Cricket

This Tuesday, India thrashed Australia by 74 runs in the quarter-final clash. Chasing a modest score of 233 for 9, Aussies had a disastrous start when they lost three in the first over off Kartik Tyagi, including a first-ball run-out. The run-out victim here being Jake Fraser-McGurk, the same player whose Instagram post had earlier become the hub of "racist" remarks.

Sam Fanning (75), along with wicketkeeper-batsman Patrick Rowe and Liam Scott, did try to revive the chase but it was all in vain as the Indian bowlers worked in unison and kept the score and wickets in check. As a result, Australia was bundled out for 159 inside 44 overs.

A perfect time to hit back at the Australian squad, Indian fans turned the tables and thronged to Sam Fanning's Instagram account (now made private) to mimic the racial commentary. 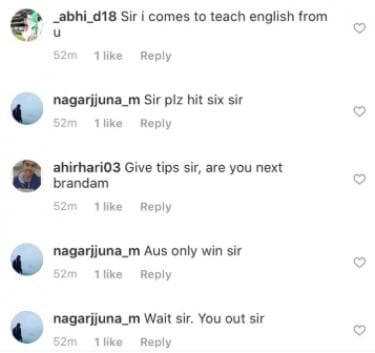