Saurabh Vaidya, who worked as an applied scientist at Amazon Alexa, took to LinkedIn to announce that the team of data scientists there, including himself, had been fired.

Amazon followed Twitter and Meta in laying off workers amid an economic downturn. A New York Times report on November 14 stated that Amazon planned to lay off around 10,000 people over the next few days. The report added that the layoffs would be focused on certain departments like devices organisation, including the voice-assistant Alexa, as well as at its retail division and in human resources. An Indian man, Saurabh Vaidya, was one of the employees laid off.

Vaidya took to LinkedIn to announce with a “heavy heart" that he had been impacted by the tech layoffs at Amazon. He said that the entire data science team at Amazon Alexa, which he was a part of, had been laid off. Vaidya said that working at Alexa Privacy had been a dream job for him and expressed his gratitude at having gotten the opportunity to work there as an Applied Scientist.

“Unfortunately, with my immigration status, I have limited time to search for and get a new role," he said in his LinkedIn post. He added that he was looking for job roles as Applied Scientist, Data Scientist, Machine Learning Engineer, Software Engineer (in ML) on an urgent basis. " I encourage us all to take care of ourselves in this difficult time," he wrote. 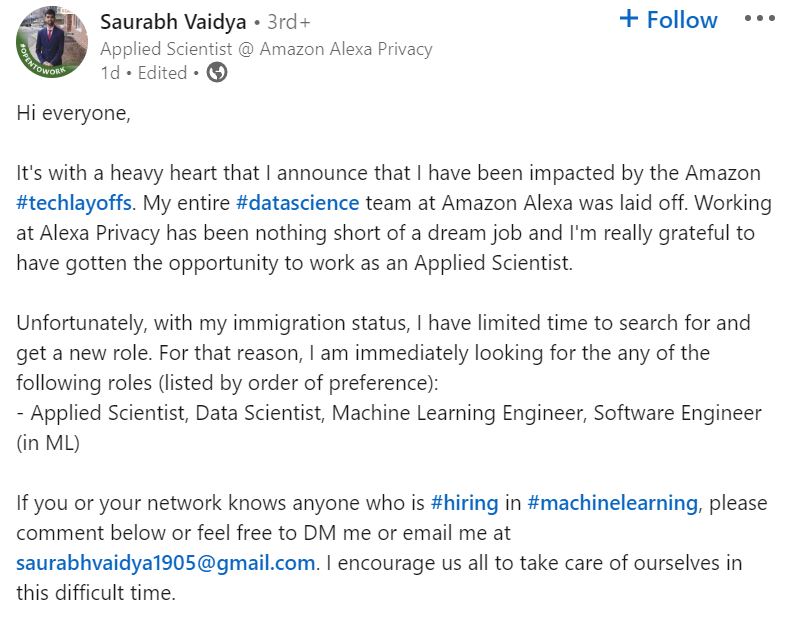 Many LinkedIn users pitched in with job opportunities and vacancies they had come across.

Earlier, an Indian man who was working at Meta as a senior technical program manager was unexpectedly laid off and had sought for help on LinkedIn in an unfortunate development. Raju Kadam had been working at Meta for nine months and said in a LinkedIn post he wasn’t expecting to be laid off as he had had “strong performance in all quarters" since joining the company.

“I am on H1-B visa and my clock to leave USA has started today. I am reaching out to all Metamates, connections, LinkedIn community to help me find a job in otherwise I have to leave USA with my kids… My 2 sons (Arjun - superman, Yash -Chicken) are US citizens, and their lives will be impacted," he wrote in his LinkedIn post, which got overwhelming response.