Is 'Teri Mitti' the 'Give Leonardo DiCaprio an Oscar' moment of Bollywood cinema?

While the lyricist of 'Teri Mitti,' Manoj Muntashir was nominated for a Filmfare, it lost to Gully Boy's 'Apna Time Ayega.' Divine and Ankur Tewari won the award.

'Apna Time Aayega' is about Ranveer Singh's character's struggle and became something of a catchphrase after the song released. 'Teri Mitti' is about the sacrifice of soldiers and them being thankful that they'll die on the soil of their land.

Following the award, Muntashir announced on his Instagram that he was not going to attend any award shows ever again.

While he did not begrudge or criticize 'Apna Time Aayega,' he wrote about how he didn't think he could write a better verse than, "Tu kehti thi tera chaand hoon main, aur chaand humesha rehta hai."

Google Trends in India showed that people were looking for links to "dowmload," (yes, its misspelled) the song 'Teri Mitti' after the award was announced. It even showed up when you Google 'Gully Boy lyrics.' 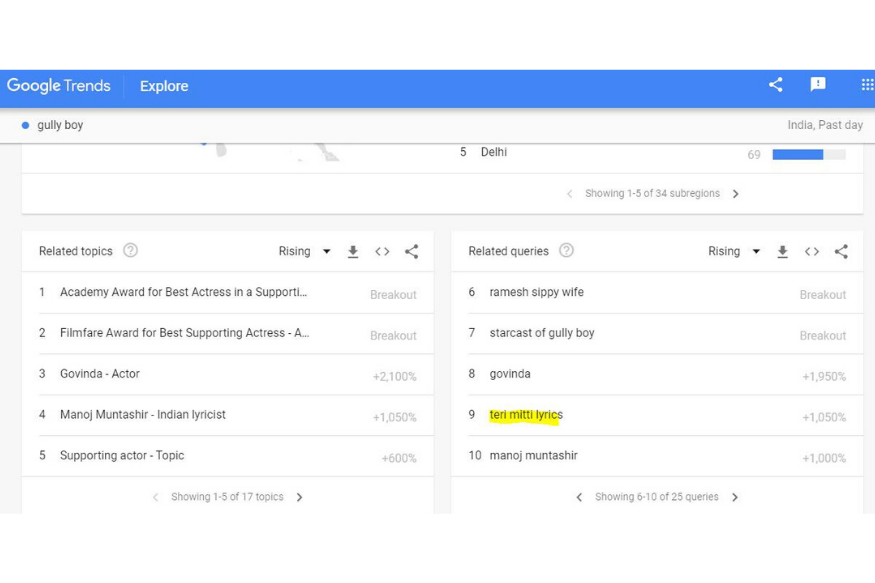 Fans also flooded both the comment section of YouTube videos of both 'Teri Mitti' and 'Apna Time Aayega' with comments about how 'Teri Mitti' deserved to win the Filmfare award. With the overwhelming support that came after 'Teri Mitti' losing, one can only wonder, is 'Teri Mitti' the 'Give Leonardo DiCaprio an Oscar' moment of Bollywood cinema?