On Google, search terms such as "india china border" and "china border" spiked late at night, indicating heavy search interest in the terms.

Late on Wednesday evening, news broke of the President of the United States of America, Donald Trump when he allegedly told Prime Minister of India, Narendra Modi, "It’s not like you’ve got China on your border.”

The news comes from a new book written by two journalists from the The Washington Post. According to the book, “Modi’s eyes bulged out in surprise” after Trump's comment.

“Modi’s expression gradually shifted, from shock and concern to resignation,” it says. An aide of Trump concluded that Modi likely “left that meeting and said, ‘This is not a serious man. I cannot count on this man as a partner.’”, the book added.

As this news started making the rounds, Indians took to Google to settle their qualms to make sure whether India and China actually shared a border.

On Google, search terms such as "india china border" and "china border" spiked late at night, indicating heavy search interest in the terms. 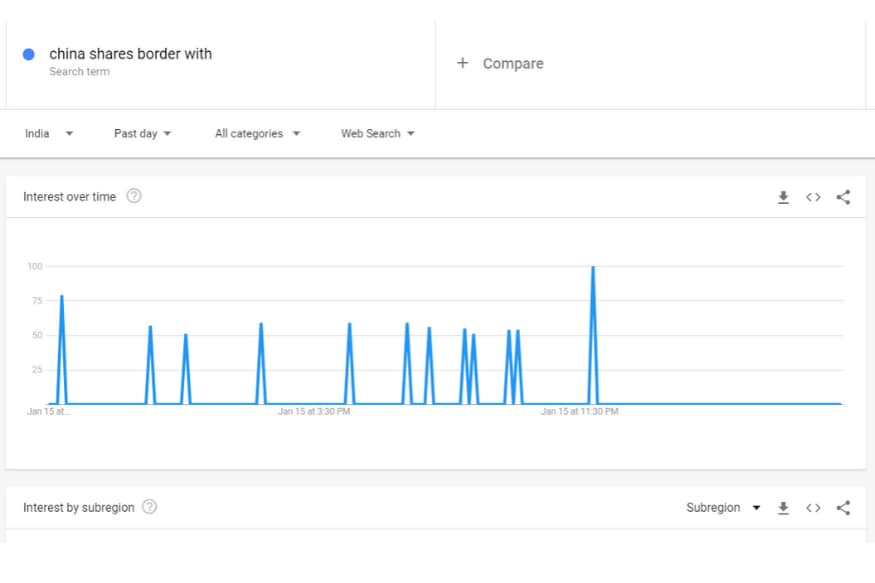 To further re-confirm their doubts, Indians also searched for the name of the border, the length and exactly where it meets with India. The authors of the book quote a White House official who says that at times, Trump is “dangerously uninformed”.

Last year, there was an uproar in India after Trump said that Modi had sought his mediation to resolve the Kashmir issue during their meeting along the sidelines of the G-20 summit in Osaka in Japan.

Within an hour, the Ministry of External Affairs had issued a statement without actually calling Trump a liar.