As news of the IAF air strike in Balakot trickled in early in the morning, both Indian and Pakistani media went into overdrive with varying news reports.

Early on Tuesday morning, 12 Indian Air Force Mirage-2000 jets crossed the Line of Control (LoC) and bombed terror camps of Pakistan-based Jaish-e-Mohammed (JeM) in Balakot. The air strike, which has been dubbed 'surgical strikes 2.0', follows two weeks after a terror attack on CRPF soldiers in Pulwama, Jammu and Kashmir.

As news of the attack trickled in early in the morning, both Indian and Pakistani media went into overdrive with varying news reports. Foreign secretary Vijay Gokhale confirmed the air strike and said a large number of JeM terrorists, trainers, and senior commanders were eliminated at the largest terror training camp in Balakot. The camp was led by Maulana Yusuf Azhar alias Ustad Ghauri, brother-in-law of JeM Chief Masood Azhar. The government said the camp was located on a hilltop, deep in a forest, and far away from any civilian presence.

How Pak Media is Reporting the Attack

While Indian media praised the precision and success of the attack, many media outlets in Pakistan confirmed the attack but said the Indian jets “fled” after Pakistani forces retaliated. A report in Pakistani daily Dawn ran the headline, "Indian aircraft violate LoC, scramble back after PAF's timely response: ISPR". The headline refers to a tweet by Director-General Inter-Services Public Relations Major-General Asif Ghafoor who posted pictures of an alleged payload from IAF jets, with the caption, "Payload of hastily escaping Indian aircraft fell in open."

Pakistani media is treating the attack as an LoC violation and has accused India of warmongering. Yet another article in Dawn is currently running with the headline, "Pakistan will respond to Indian aggression at time, place of its choosing: NSC on LoC violation". The report is based on the statement by Pakistan's National Security Committee which met in a special meeting convened by PM Imran Khan in the wake of the attacks. 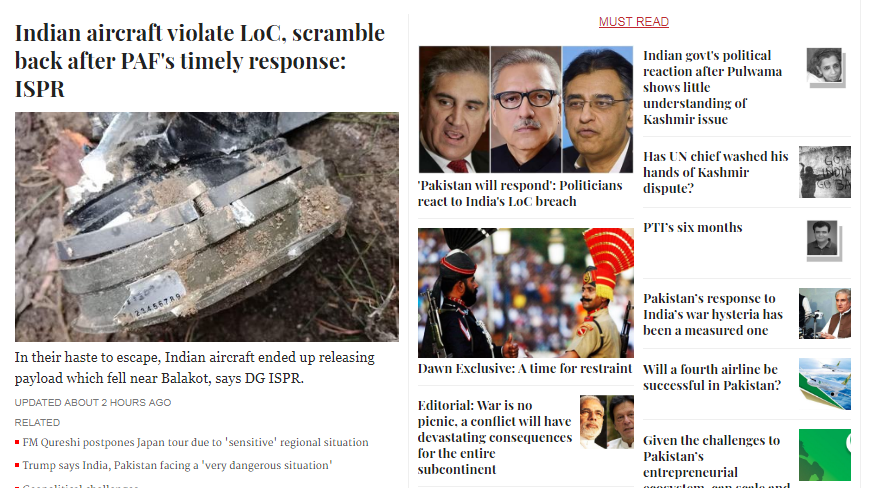 Much of the reportage focused on dismissing the Indian strike as an unsuccessful with no casualties. One of the top reports in Samaa TV's website is headlined, "Pakistan Air Force foils attempted Indian attack after it breaches Line of Control".

Other news articles appearing in news websites such as Dunya News derided the Indian Foreign Secretary Vijay Goyal for not being able to answer media queries regarding the strike during a press conference. 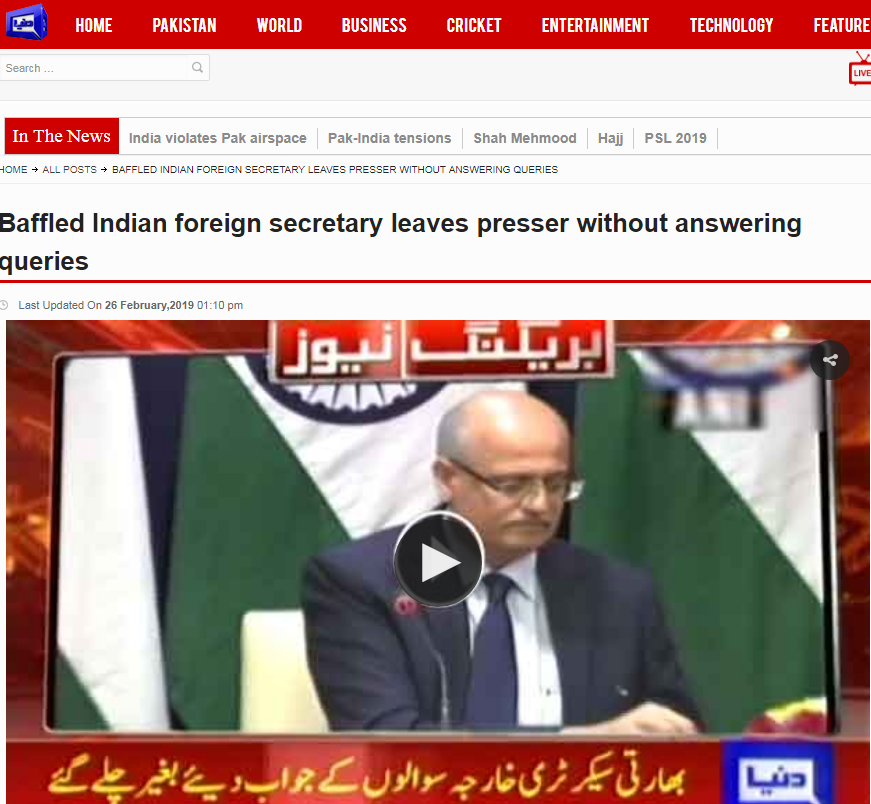 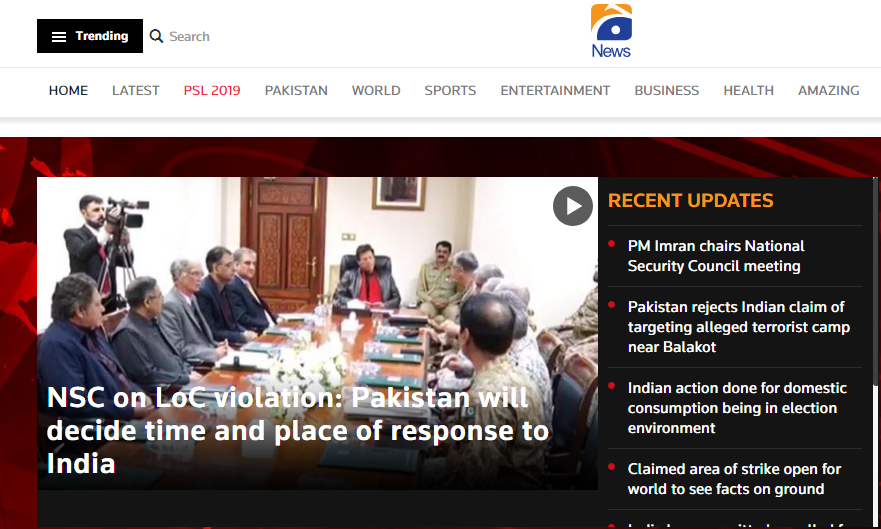 Another point of consensus across media outlets in Pakistan was that the attack was a result of India's internal political agenda and called the IAF strike as an act of unwarranted aggression in order to win an election. Similar sentiments were shared by the ruling party Pakistan Tehreek-e-Insaf's Twitter handle. 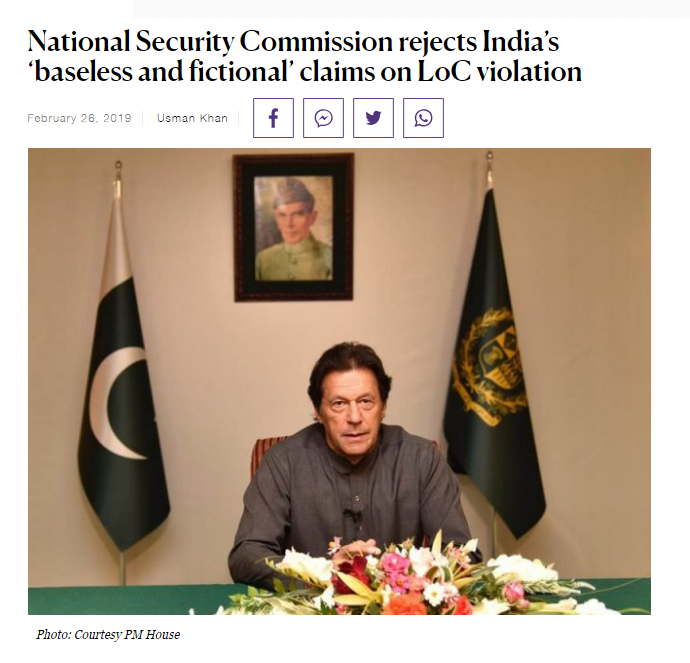 (screenshot of a report in Dunya News)

Many reports also directly denied any attack or casualties whatsoever. One of the reports in Samaa TV is still running the headline, "National Security Commission rejects India’s ‘baseless and fictional’ claims on LoC violation", despite India's assertion that it hit a major terror training site in Balakot. Though unverified, several TV news channels are even mentioning a tentative number of casualties.

While Indian and Pakistani media outlets may be engaging in a tussle of their own after the attack, international media has largely remained neutral and wary of making assertive comments. Following the attack, a report appeared in New York Times with the headline, "Indian Jets Strike in Pakistan in Revenge for Kashmir Attack". (Screenshot of a report in CNN) (Screenshot of report in ABC News)

Most news agencies in the US also reported on China's response to the attacks. China, which had previously had a lukewarm response to India's accusations against Pakistan and JeM following the Pulwama attack, said that the fresh IAF attack would mark a new low in the ties between India and Pakistan.

As per reports in state news agency Xinhua, the Pakistani Foreign Minister Shah Mahmood Qureshi phone called his Chinese counterpart to discuss the fallout of the attack. the report was titled, "Chinese, Pakistan FMs hold phone conversation over Indian-controlled Kashmir attack". Note use of 'Indian Controlled Pakistan' as opposed to 'Pakistan Occupied Kashmir', the phrase that India officially uses to mark the conflicted border area. In the UK, quoting Indian authorities, Guardian wrote that the attack was an 'act of extreme valour'. The report was headlined, "India launches airstrikes on Pakistan across disputed Kashmir border". Some local news agencies such as Northwhich Guardian also reported on the inconsistencies between India's claim of achieving multiple terrorist casualties as opposed to Pakistan's official denial of any. Even as most international media outlets resisted from commenting on the issue yet, the event made it to the top news of most of the news agencies that were mentioned in this report.