A monk-turned-motivational-speaker-turned fraud? Nicole Arbour has accused motivational speaker Jay Shetty of plagiarising his entire career from other people's work.

A former monk, a drug-addled adolescence, a sudden spiritual encounter and world success as a motivational speaker - the introduction of Jay Shetty reads like the synopsis of a Hollywood film featuring a young Leonardo DiCaprio.

After becoming a monk at age 22 and apparently living and meditating in caves (as per dubious reports), Shetty started his Facebook channel in 2016 - it now has over 25 million followers. His highly-rated daily show, #FollowTheReader on HuffPost Live raked in millions of views and saw interviews with top celebrities.

The motivational speaker, self-acclaimed former "monk", filmmaker and content creator hit international headlines in 2017 when he was listed under Forbes 30 Under 30 list and has been shortlisted for as well as won several other awards.

However, it now seems that much of the content and quotes that he shared on his social media pages may just have been plagiarized.

Internet celebrity Nicole Arbour recently called out Shetty for plagiarising many of his quotes from existing celebrities - basically calling him a fake.

"I don't like it when people trick people," Arbour said in a recent video uploaded to Facebook in which she "exposed" Shetty. "He's foolish and he a hundred percent stole everything that his career is based on," she said.

To prove her point, she pointed out the apparently original sources of some of Shetty's viral quotes. Such as this one: "a relationship without trust is a like a car without gas...you can stay in it all you want but it won't go anywhere." This is a quote by Michael J Herbert. 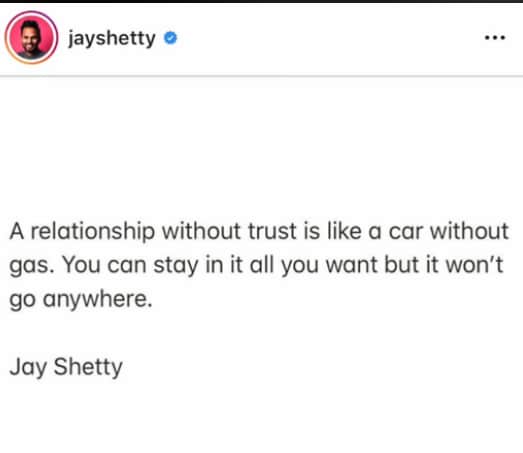 Here's another one that Arbour pointed out: "Most people never start because they don't want to be seen starting from the bottom. don't be MOST PEOPLE. want to start with me?" This was posted by an entrepreneur called Analie Escalicas on Facebook. a few days later, here it was on Shetty's wall. Arbour, who spent a lot of time in bed after a debilitating car accident said she had spent a considerable amount of time on the internet during that period, consuming content by life-influencers and motivational speakers. And so Shetty's plagiarism stung even worse.

She went on to list a number of instances of apparent plagiarism by Shetty. You can watch the full video here:

Since the "expose", Shetty, who is massively active on Twitter, Instagram as well as Facebook, has been "quoting" tweets and attributing them to their original owners, a practice that, as Arbour pointed out, he had not followed while seemingly lifting quotes word-to-word in the past.

If you can laugh at yourself you will never run out of things to laugh about. ~Epictetus

We are more often frightened than hurt; and we suffer more from imagination than from reality.

However, many on Twitter called out Shetty and were all praises for Arbour for bringing the truth out for the world. Others such as comedian Sanjay Manaktala had already been accusing him of plagiarism at the time Arbour's video came out.

the one where @varun067 and I spent much of our time making content to motivate the techie/engineering youth, and meditative influencers who earn $100K speaking fees lie about where they got it. #jayShitty pic.twitter.com/5BRDPVUX6Q

Woah, finally he gives someone due credit and not “written & performed by @JayShettyIW”#TheProfessionalMemeReader #JayShettyExposed https://t.co/mZrUz4L65s

after getting called out . U decided to give credits to originals

Jay Shetty: Just Be yourself.

If anyone has a good motivational quote, please leave it here.
If anyone has some good life advice, let me hear it.
No, I don't really need your advice, just put it here before Jay Shetty steals it.

So Jay Shetty built an entire career out of stealing quotes from the internet. Lmao.