This is Netflix's second offering based on the notorious serial killer, the first being Joe Berlinger's docu-series, Conversations with a Killer: The Ted Bundy Tapes that was dropped by the streaming-giant on slasher's birthday on January 24.

Ted Bundy was an American serial killer, rapist, kidnapper, and necrophile, who assaulted and murdered over 30 young women in the 1970s.

Extremely Wicked, Shockingly Evil and Vile which was premiered at Sundance Film Festival this January, sees Zac Efron as Bundy and Lily Collins as Liz Kloepfer.

But there's some good news for the Metallica fans here.

Hetfield, the guitarist and singer for the legendary heavy metal band, will be seen portraying the role of sergeant Bob Hayward in the biopic-thriller. Officer Hayward had cornered and arrested Bundy first in 1975 and found a ski mask, pantyhose, crowbar, handcuffs among other suspicious items in his infamous tan Volkswagen Beetle.

While Metallica has shared Hetfield's dramatic avatar previously, the front-man can now be seen in action in the biopic's fresh-new trailer released by Netflix on April 2.

#Repost @joeberlingerfilms ・・・ A special day on set of our little Bundy movie starring @zacefron and @lilyjcollins… Metallica is in the house as @papa_het_ plays Officer Bob Hayward in his first dramatic role. Having one of my musical heroes in our film is pretty damn awesome. ・・・ Photo by @brian_douglas_stills

A wild James Hetfield appears at 0:46.

Watching their main man ditch the usual guitar and mic, Metallica informed the fans about Hetfield's appearance in the Netflix biopic. 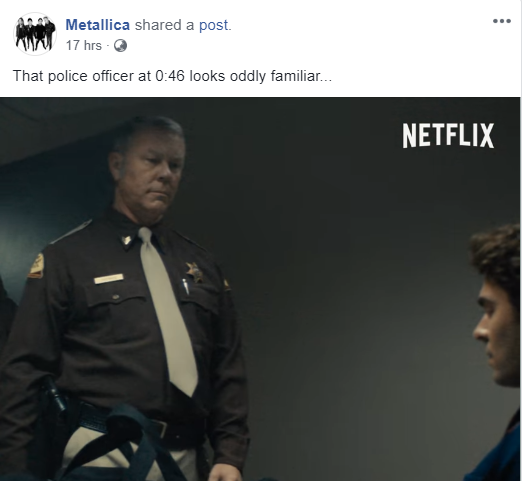 Ecstatic, fans came out in numbers and imagined Hetfield as cop with iconic Metallica songs and lyrics.

"Reporter: How did you catch Mr.Bundy?

"He really should have been the judge so he could have dubbed thee unforgiven."

"You have the right to remaaaain silentahh...hush, little baby, don't say a word."

"Dude, I saw that cop at every Metallica show I ever went to!!!!"

"I am legit only gonna watch this for James. If there's a chase scene, please PLEASE have him sing "searchiiiiiiiinnnngggg seek and destroy!!!!"

"And justice for Ted lol"

"Gimme coffee, gimme doughnuts, gimme that which I desire!"

Hetfield will embark on Europian tour with Metallica starting from May 1 when the movie premieres worldwide.

Later in September, heavy metal will turn into sweet symphony, when Metallica team up with the legendary San Francisco Symphony Orchestra to open the doors of a new concert venue on 6th.

Conducted by Michael Tilson Thomas, the concert will also mark the 20th anniversary of S&M - (Symphony and Metallica), a live album by Metallica, which was performed by the heavy metal band with San Francisco Symphony at The Berkeley Community Theatre in 1999.