Kids, Vaayu and Corona: The Indian Government is Using Comic to Teach Kids About COVID-19

Dr. Ravindra Khaiwal, who is behind the script and concept of the comic, believes that although children are less likely to contract the disease, the panic amongst them is high.

The Government of India has released a comic, titled 'Kids, Vaayu and Corona' to help spread awareness about COVID-19 which has already claimed over 4,000 lives around the world. As of now, the number of confirmed cases in India stands at 73.

Even kids aren't immune to the paranoia that has been spreading faster than the virus itself. Dr Ravindra Khaiwal, Additional Professor of Environmental Health at PGIMER, Chandigarh, believes that although children are less likely to contract the disease, the panic amongst them is high. "Young adults above the age of 15 have other sources where they get their information from. So do adults. But people below 15 are confused about what Coronavirus is all about," said Dr. Khaiwal, who along with Dr. Suman Mor of Punjab University came up with the comic strip.

The comic, which has been released under the banner of the Health Ministry, strives to educate kids about the virus and sums up its causes and symptoms in twenty-two pages. The colourful graphics and bold text convey the message in an appealing way to children. 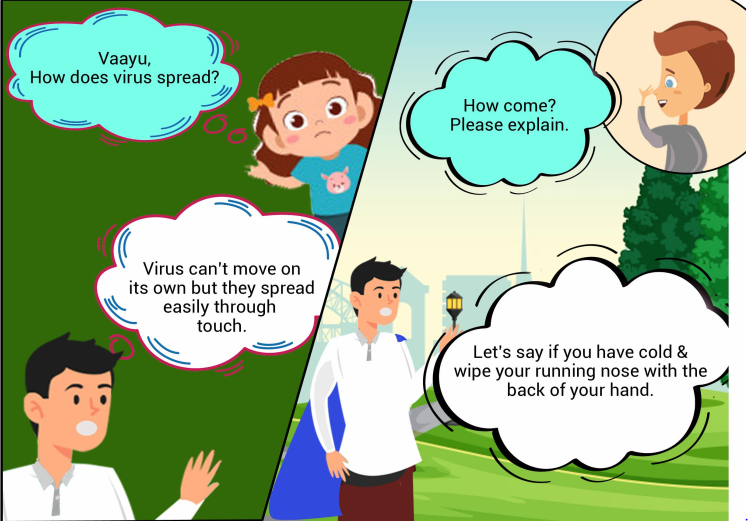 Source: Kids, Vaayu and Corona by the Govt of India.

Crediting his sons as the motivating factor behind the comic, Dr. Khaiwal said, "My son had once asked me about Coronavirus. Like the comic, I'd told him that I would explain later. That is when I realised that this must be the case in most households. While the parents might read up on Coronavirus, they should also take out the time to explain the same to their kids."

The comic introduces a fictional character, Vaayu, who apparently lives in the foothills of the Himalayas. The superhero flies down to speak to children about coronavirus and educates them about it.

The comic explains how the virus spreads and little measures that children could take to avoid getting infected. For instance, Vaayu, the superhero, urges children to stay away from crowded places and to avoid touching others as much as possible. Children are also encouraged to greet each other "traditionally" instead of shaking hands. 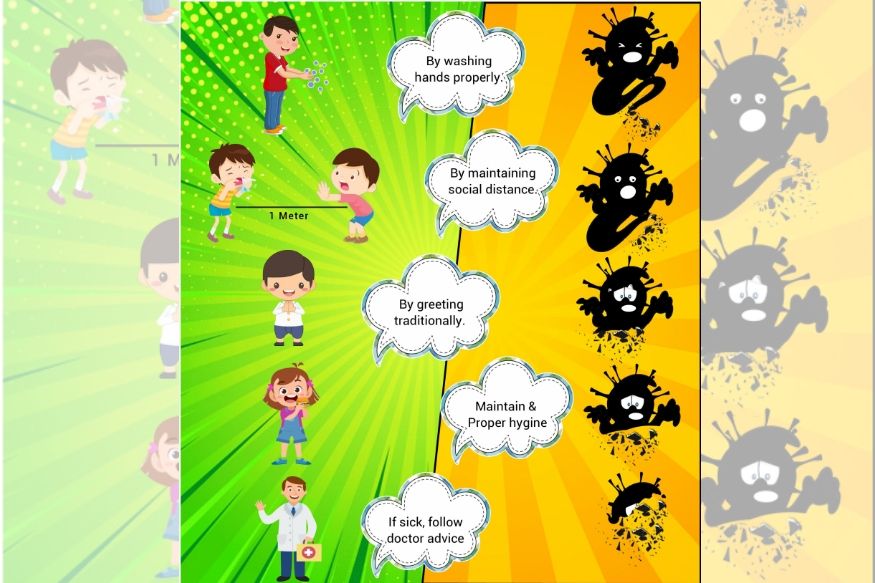 Source: Kids, Vaayu and Corona comic by the Govt of India.

More importantly, the comic also teaches kids about previous pandemics like the SARS outbreak of 2003. A glance at the comic shows the character, Vaayu, repeatedly telling children that they shouldn't be afraid. "The whole idea behind the comic is to reassure kids and show them that there is no reason to panic and to tell them that the Coronavirus can be beaten if precaution is taken," Dr. Khaiwal further added.

Dr. Khaiwal also said that the Ministry is ensuring that the comic reaches a maximum number of children around the country and is thus being translated into regional languages as well.

Not just kids, it is hoped that the comic would help spread awareness across all age groups, especially as the WHO declared coronavirus a pandemic, issuing a grim warning that the global spread and severity of the illness was due to "alarming levels of inaction". At present, the number of cases across the globe has risen to more than 124,000 with 4,500 deaths, including a jump in fatalities particularly in Iran and Italy.
Tags: