Koo is a microblogging social media app that was launched 10 months ago in March 2020 by a Bengaluru based start-up. The name is giving major LOL to Tamilians on Twitter.

"I am now on Koo. Connect with me on this Indian micro-blogging platform for real-time, exciting and exclusive updates," Union Minister of Commerce and Industry Piyush Goyal's invite to people on Tuesday to join the new microblogging social media site called Koo turned into a snowball effect on Twitter.

Ministers to aam janta, several were curious to know more about the app and soon began migrating to Koo.

Koo is a microblogging social media app that was launched 10 months ago in March 2020 by a Bengaluru based start-up. It is currently being pitched as India's homegrown alternative to Twitter. The app won the Aatmanirbhar App Challenge organised by the Indian government last year in August to encourage homegrown innovation.

With the app came the inevitable memes and desis "koo-ked" up puns as well on Twitter.

Also Read: What is Koo, Who Made it? Top Ten Questions You Had about Twitter's New Desi Doppelganger

It was only a matter of minutes before Koo united the Tamilians on the Internet and they couldn't stop giggling every time the name popped up on their timelines.

For the non-Tamilians, they were busy asking everyone they could get their hands on to learn what the word Koo really meant.

Me, a tamil intellectual, everytime I see this new app Koo mentioned on TL: pic.twitter.com/eCIbN0UKjQ — Potato Based (@pepsiwithastraw) February 10, 2021

Good god! Just got to know that India’s answer to @Twitter is called #Koo - this is going to be great in Tamil. — Sriram V (@MadrasMobile) February 9, 2021

Ask a tamil what koo is short for and watch them giggle — Rajiv Ramanujam (@vernal_equinox) February 10, 2021

The madness wasn't just limited to Twitter. A glance at the growing google trends in India shows that people channeled their inner Sherlock Holmes on Wednesday. 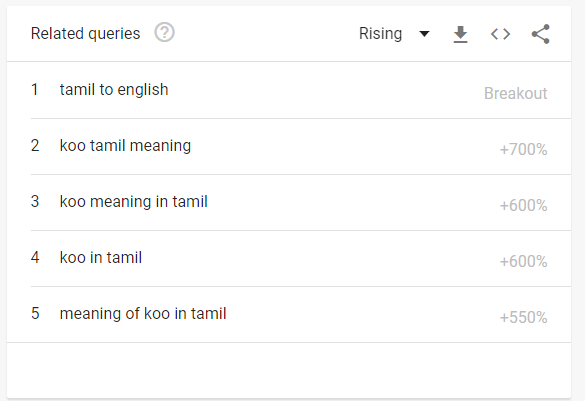 So what does Koo really mean?

A quick search under any of the aforementioned tweets may give you an answer.

Friendly disclaimer: You're better off not knowing the meaning.

Koo was co-founded by Aprameya Radhakrishna and Mayank Bidwatka in 2020. It is owned by the parent company Bombinate Technologies Pvt Ltd which also operated Vokal, the desi version of the QnA app Quora. Radhakrishna, an Indian Institute of Management, Ahmedabad, graduate, is also the CEO.