Yuzvendra Chahal got into his 'Chahal TV' avatar and grabbed the mic from the presenter, then proceeded to have a chat with Martin Guptill after India's second T20I win on Sunday.

Remember Martin Guptill? The same New Zealander whose moment of brilliance on field "denied" India their third World Cup? Yes, you do. The same Kiwi who got Dhoni run out dramatically, assumedly in latter's last outing.

He's back in news again. Although this time it's all fun and games with the Indian players.

On Sunday, India brought Kane Williamson's squad down on their knees on their soil in Auckland where the Indian bowlers restricted the home team for a lowly 132/5. The chase was a comfortable one. The man in form KL Rahul (57*) along with Shreyas Iyer (44) crossed the victory line with 7 wickets and 15 deliveries to spare.

But the real highlight of the night came during post-match when Indian presenter and journalist Jatin Sapru, armed with a mic, was interviewing the winning team.

This was when Indian leggie Yuzvendra Chahal got into his "Chahal TV" avatar and grabbed the mic from Jatin and proceeded to have a chat with Martin Guptill.

Guptill, who was having a word with Rohit Sharma was interrupted by Chahal who asked, "What's up boys? What's up?"

Kiwi, out of nowhere, responded to Chahal's question with a Hindi slang. "Kya be g*ndu?" (Let's not even get into the translation of this).

Realising it was all unfolding on live television, Rohit Sharma was left in splits and the Indian opener quickly sprinted away from the camera frame.

Unfazed by the random gaali tossed at him by Guptill, Chahal stayed in his character and continued the "interview" by asking, "Kaisa lag raha hai aapko? (How are you feeling?)"

Of course, fans noticed the incident and were quick to share the video in amusement on Twitter. 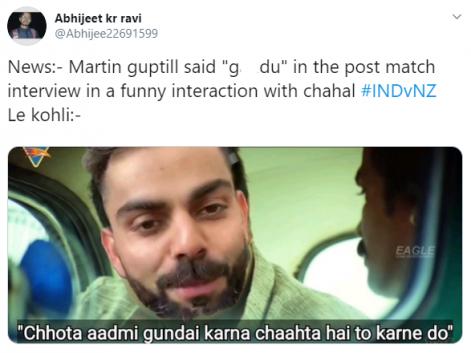 Chahal : What's Up Boy?
Martin Guptill : Hi G**du😂😂
And Blv Me This Is Not A Joke
Guptill Really Said This pic.twitter.com/N8FS64h40U

Coming back to the serious stuff, New Zealand will meet India on Wednesday in the third T20I at Seddon Park in Hamilton in a bid to keep the series alive.