Home» News» Buzz» Manual Scavenging is Illegal in India. Then How are There 7 Lakh 'Foot Soldiers of Swachh Bharat'?
9-MIN READ

Manual Scavenging is Illegal in India. Then How are There 7 Lakh 'Foot Soldiers of Swachh Bharat'?

While the focus of Swachh Bharat Mission was on building more toilets, faecal waste management remains an unsolved issue.

In 2013, the Government of India for the first time acknowledged the cleaning of dry toilets as manual scavenging and made it an illegal offence, punishable by up to two years of imprisonment. However, so far no convictions have been made under the law.

Yet, over 20,500 people have been identified as involved in manual scavenging according to a new survey being conducted by the Union Ministry of Social Justice and Empowerment across 18 states.

What makes the practice so widespread despite legislation banning it? While many blame bad implementation, the answer could be in the flawed Act itself.

An Act with Many Loopholes

However, the Act has certain loopholes. It bans ‘hazardous cleaning’ of septic tanks and sewer pits, but only if the workers are not provided ‘protective gear’ and ‘other cleaning devices’. Furthermore, it does not define what the ‘protective gear’ is. Private contractors usually take advantage of this loophole and do not provide any gear while making private workers clean sewage pits and septic tanks.

In case a human has to be put inside a sewer, Safai Karamchari Andolan's Bezwada Wilson stated that at least protective gear such as gloves, masks and shoes must be provided. A doctor must be kept at hand, as well as an ambulance in case of emergency. However, none of these measures is usually taken. Excreta creates harmful gases such as sulphur, methane and others that can cause severe damage and even death. 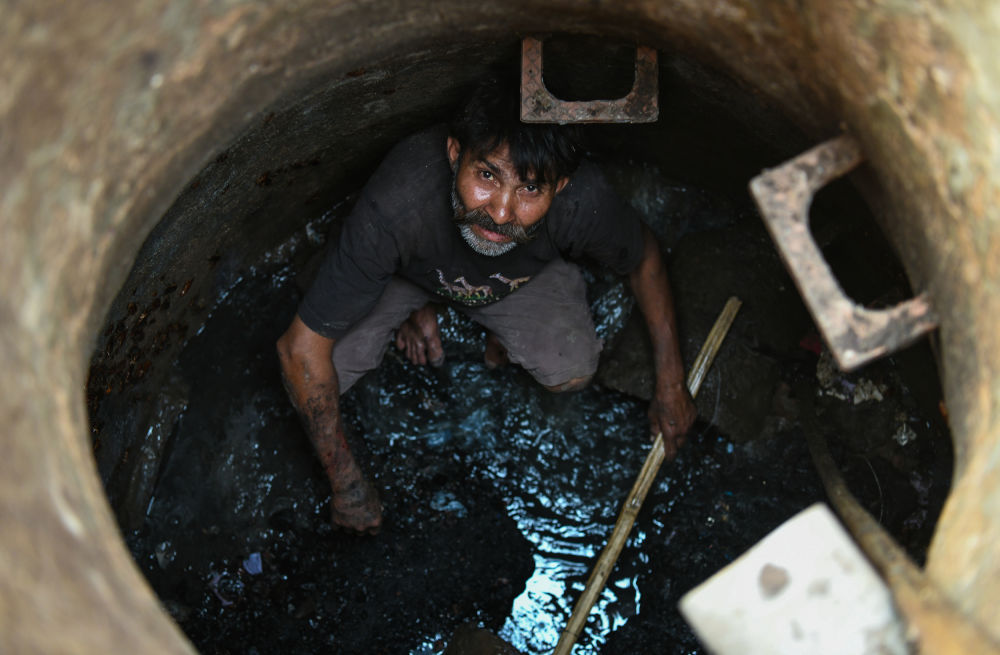 The five men who recently lost their lives inside a septic tank in Delhi's Moti Nagar had allegedly been forced to enter the tank without any gear and they died due to lack of a second rope to pull them out when they started to asphyxiate after inhaling toxic gases.

Former secretary to the government of India, PS Krishnan told News18 that the law, while it banned manual scavenging, had left out some important aspects.

"Before the 2013 Act, I had made certain recommendations for the Act that included an increased focus on rehabilitation. Many of those recommendations were not accepted," Krishnan said.

The former bureaucrat who has worked extensively with the SC/ST communities said that as long as people had the option to employ manual scavengers, they will continue doing so out of habit or economic concessions as private sewer cleaners are cheap labour.

"To eradicate the profession of manual scavenging, it is important to provide these people with alternate professions. The government could start by giving specific training for vocations like plumbing, gardening etc to those involved in manual scavenging," Krishnan said. However, he added that both state and central level governments seemed disinterested in investing in these measures.

Instead, the focus of the Act has been on demolishing the insanitary latrines, open drains and pits. But despite that, manual scavenging continues, especially on railway tracks and platforms across India as well as places that are prone to open defecation. And building toilets have led to its own ills.

The existence of sewer cleaning can also be seen as a consequence of the extensive toilet-building under Swachh Bharat Mission (SBM), the flagship sanitation program of the BJP government.

However, according to Bezwada Wilson, most of the toilets built were single pit toilets that become full after about a year’s use. These toilets are then often cleaned manually. Twin pit toilets have the advantage of longevity where one pit gets full and then the other pit is used till the excreta in the first pit turns to manure. But even this excreta-turned-manure pit needs cleaning every few years and that work is carried out by manual scavengers, who Wilson called the anonymous 'footsoldiers of Swachh Bharat'.

"The problem of Swachh Bharat Mission is that it gave people toilets but it never gave them ways to dispose of the waste," said environmental activist Vimlendu Jha, adding that SBM has been completely mum on the problem of manual scavenging. "While building toilets is a progressive thought, the government also has to spell out where all that waste is going to go," Jha said.

The environmentalist was echoed by activist and filmmaker Pradeep Saha who has been extensively working with sewage and faecal waste management systems in India.  "Everyone wants to build more toilets and think about the problem of faecal matter management is solved. However, the toilets that were built under SBM  are dependent on water and a lot of parts of India, especially rural India, are not connected by the sewage system. Where will all that water waste go? " Saha asked.

According to the activist and former editor of Down to Earth, sewer lines connect only the rich, middle and upper-middle-class parts of cities. In villages sometimes they don't exist at all. In most cases, these areas were serviced by manual scavengers.

Jha, whose film 'Fecal Attraction' emphasized the poor waste management system in India and the consequent pollution of rivers because of it, said that most cities produced more faecal sludge and sewage waste than it could handle due to unregulated and undocumented water usage (including use of groundwater). As a response, city authorities usually built more sewage treatment plants (STP) that were often cleaned manually.

He said that creating an active and working sewage system that connected all toilets as well as mechanized disposal of faecal matter was a must in relieving manual scavenging.

“We have machines that clear out faecal sludge. The process is mechanised. We do not use manual scavengers,” Meena said. However, he admitted that under ‘special circumstances’, the DJB ‘outsourced’ the work to private contractors.

“Sometimes, the machines cannot enter the narrow sewer lines. These need to be cleaned manually,’ he said. He was quick to add that it was not the DJB sanitation workers who were made to do the scavenging. Private companies were hired to bring in their own workers, i.e private manual scavengers like Anil who lost his life in a Delhi Jal Board sewer pit in Dabri in September.

Meena told News18 that when private companies were hired, providing them gear was not the DJB’s responsibility. It was the company’s job to provide gear. Manual scavenger Dilavar, who works as a local-level contractor and has been cleaning sewers for almost 30 years now, said that he and his boys were often hired by ‘companies’ to clean tanks.

According to lawyer and activist, Usha Ramanathan, the law has to change, especially with respect to the ‘protective gear’ clause.

“Manual scavenging is a known offence now and there are laws but it is still happening. That can only happen with government compliance. Both state and central level governments need to be stringent about the implementation of the Act and the 2014 Supreme Court directives,” Ramanathan said.

The lawyer also believed that manual scavenging needed to be completely banned and not ‘regulated’ with the help of safety gear as the current law tries to do. Ramanathan said that the only way to stop people from dying inside sewers was to stop making them enter. In 2014, a Supreme Court bench headed by Chief Justice of India P Sathasivam, laid out a series of directives for states and union territories to abolish manual scavenging. Based on public interest litigations filed by the Safai Karamchari Andolan, the court passed several directives to reinforce rehabilitation programs for those who are or whose family members are involved in manual scavenging. However, SKA head Bezwada Wilson told News18 that manual scavengers were hardly aware of these rights and worked for daily wages. The fact that most manual scavengers came from the Scheduled Caste doubled the social boycott of these workers who were unable to find any work other than manual scavenging.

Poet and activist Dilip Mondal said that caste was the biggest reason for the continuance of manual scavenging. Speaking to News18 at a rally in Jantar Mantar organised in protest against the recent sewer deaths in Delhi, Mondal said that it was only the existence of caste system unique to India that ensures a section of people could continue to be subjugated and relegated as shit shovelers.

“No modern country in the world forces human beings to enter sewers to clean them the technology to prevent that has existed for almost 80 years. Why then does India use manual scavenging? It is because we have a caste which has for ages been forced to do it for minimal pay,” Mondal said. He added that this availability of cheap labour was the main reason why states and central government did not invest in technology to replace manual scavenging. He also added that to prevent manual scavenging, it was important to 'de-caste' the profession, though he believed such equality would take years to come.

(In September, at least ten people died manually cleaning sewers and septic tanks across India, spurring a flurry of protests against the foul practice. This is the third part of #WhoCleansYourShit - a series of in-depth reports by News18 on the practice of manual scavenging, the reasons why the practice still exists India despite being illegal.)