Home » News » Buzz » Meet Kimberly Shah, a foreigner living in India who is doing a better job at embracing the country than most of us
4-MIN READ

Meet Kimberly Shah, a foreigner living in India who is doing a better job at embracing the country than most of us

We are often amazed at how great people abroad are at keeping their streets clean or their houses organized without servants. It would be difficult to imagine a foreigner come and adapt to the Indian way of living, right? A leading triathlete from the US has chosen to shift base to Ahmedabad in India and her journey is part amusing, part eye opening for us.

Kimberly Shah, who married a Gujarati NRI in the US, grew up on a farm in Indiana, and always knew America wasn’t the place for her “Little did I know it would be India. In fact, I did not even try Indian food until I had met my husband. But the day I stepped off the plane and took my first breath of Indian air, calm set over me. It was love at first breath,” Shah says.

While her family feared that her husband would “abduct her to India and they would never hear from her again”, the opposite became true. Shah taught her first fitness class in India 6 years ago, and told her husband “I will help revolutionize the Indian fitness world”. Last year was her acid test to see if people would actually want to hear what the American white girl had to say about making changes in their Indian lifestyle. “After being welcomed with open ears, hearts and arms, I moved here permanently this year,” she says. And so, her crazy, adventurous Indian life has begun. On Facebook, Shah shares stories about monkeys raiding her kitchen in the 100 year old bungalow that she lives in and buying fresh food at the rate Indians get from the vendor with fun and sarcasm. On other days, she proudly speaks about the strides she has made in learning Hindi. “Before the sun rises is my favorite time of the day, when the peacocks start to stir with their cawing no later than 5 am, followed by the monkeys at exactly 5:55 am. I fix some French Pressed coffee, go for a workout, ride the countryside or run through the streets warding off stray dogs. On occasion, I hit up an egg station for some bhurji and pick up 3 coconuts post workout. Then I go for my Hindi lessons; it’s a humbling experience to be illiterate and not understand people, but I have to learn it.” In sports, Shah has broken hurdling (track and field) records, spent two years diving in Junior Olympics and competed in rock climbing for 4 years. Then, she moved on to triathlon. “I have been on Team USA, placed third at nationals and 13th overall at world championships at Sprint Distance. I have competed in over 100 races and total of 7 Ironman distance races with 3.8km swimming/180km cycling/42km running -11:05 hours being my best,” she elaborates. However, in India, she has been made to feel sorry for not knowing how to drape a saree. “I think sarees are beautiful and was super excited for the first wedding I got to attend wearing one. But the minute I showed up, two women stripped me down to my blouse and petticoat before I could say something. They started rewrapping it as I stood in public, mortified and embarrassed. It happened again and I realized, being the foreigner in a saree, people were going to pick on me. So I spent endless hours in front of a mirror learning how to drape the perfect saree and now, I get complimented a lot,” say the gritty Indian bahu. 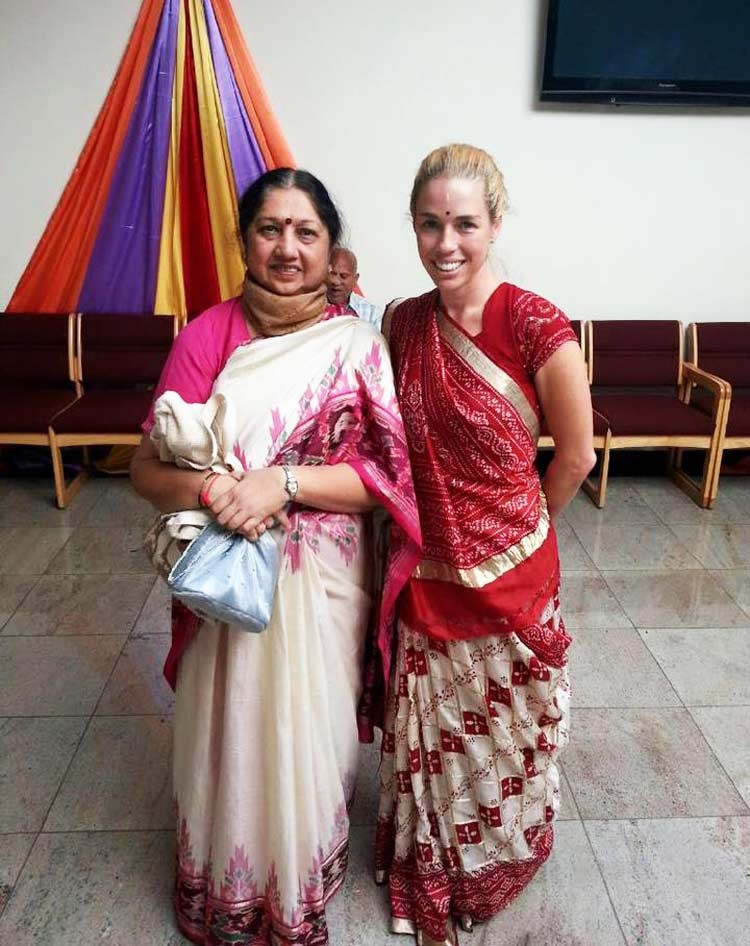 The fact that complete strangers pick on her for having no children isn’t funny either. “They tell me how sad my life is because I do not have children without any idea about my situation and feel they have the right to lecture me and get very personal. I am usually left feeling sad and almost in tears about once a week from these conversations,” she says. But Shah loves everything else about India. “I love the people, the food and the festivals. I love traveling by train. The colors and smells are vibrant and stimulating. The unorganized chaos has a charm and every single day is an adventure, you never know what can happen. Living here is teaching me the art of patience.”

The triathlete has been called an ‘American Jain’ by monks as well. On the annual family trips to Palitana, a Jain pilgrimage, Shah loves to hike to the mountain top by herself. “The candlelit temple glowing at dawn and Mahavira covered in flowers warms my soul. On one particular trip, I was exploring the hillside when two nuns stopped me and asked if I knew the ‘Namakar Mantra’. When I nodded, they made me say it. Wide eyed, they smiled and said, “American Jain! Chalo, come with us.” I followed them around to every temple in the vicinity and got my own private schooling. It was my first experience in a temple and I actually felt accepted by the people around, rather than just being stared at and treated as if I knew nothing,” Shah says with a smile. As her bittersweet trysts with India continue while she challenges the fitness scene here, we ask if she misses America, where her in-laws continue to live. “The coffee, peanut butter and my running shoes,” she quips.