Moonmoon Ghosh
The recent global climate strikes led by students turned the spotlight once again on the severity of global warming and climate change. Coupled with Sir David Attenborough's stark warnings, these are challenging times for both organisations and individuals involved in raising awareness.

Italian photojournalist Federico Borella is one of them. Last month, his reportage centred on climate change won him the top prize at the prestigious 2019 Sony World Photography Awards. His project 'Five Degrees', based in Tamil Nadu, explored the link between the dramatic increase in the number of farmer suicides in the state and climate change and rising temperatures. Borella won the award in the documentary series, which made its debut in the competition this year.

Borella, who frequently travels to India, closed in on Tamil Nadu after reading of farmer deaths in several states, he told News18 in an interview. "I started learning about this topic and researching it in January 2018. I usually come to India every six months. During that period, I decided to focus on climate change. I read about farmers' suicides in Tamil Nadu on the internet and in many Indian newspapers," he said, explaining the rationale behind starting 'Five Degrees'.

While the issue of farmer suicides has captured headlines in Maharashtra, Andhra Pradesh, and Telangana, a similar outrage has been missing in the southern state, Borella felt. The link between suicides and global warming was corroborated by a 2017 study from the University of California, Berkeley, which estimated that 59,300 farmer suicides over the last three decades are attributable to climate change. Berkeley researcher Tamma Carleton discovered that warming a single day by one degree Celsius during India's agricultural growing season leads to roughly 65 suicides across the country, whenever the day temperature breaches the 20-degree Celsius-mark. Warming a day by five degrees Celsius has five times that effect. That's how the enterprise got its name.

Borella's project is a haunting reminder of the things, both personal and impersonal, left behind by death -- grieving widows, empty houses, forgotten objects, untended fields. His vivid images are a collection of portraits, landscapes, still shots.

But Borella consciously avoided taking any action shots. "My work is focused on the absence, the silence and the words of the missing," he said. 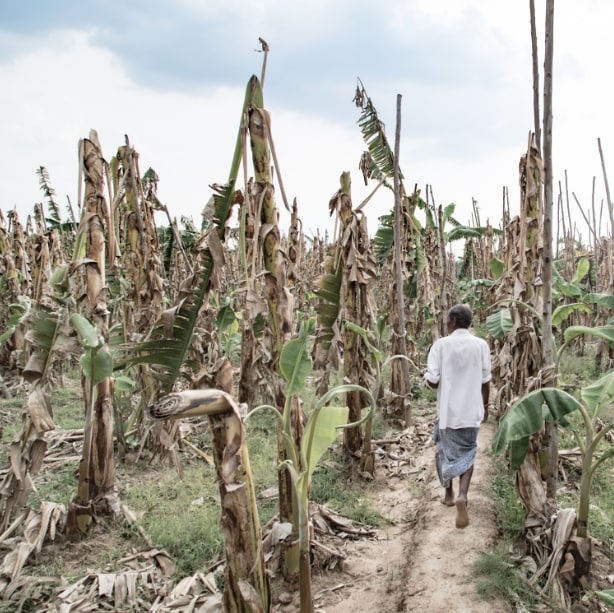 Borella uses the Canon 5D Mark IV, stacked with a 24-105 mm lens, and he chose to frame his subjects in a tighter, square format for a more personal effect.

One of the images shows Mallika standing in the middle of a field where her husband, Pallicham, killed himself in January 2017. Their crop was destroyed in a drought and the family fell into debt, which left Pallicham with no option but to cut short his life. Another image is a close-up of a widow -- the skin on her face taut, wrinkles amplified, moist eyes gazing vacantly into the distance.

There is a shot of a disembodied hand holding up a skull of a farmer who killed himself, another showing a lone shovel positioned at the centre against a bright wall, yet another showing an aged family member standing beneath a farmer's portrait, hands clasped in a prayer -- reminders of the fleeting human life, Borella felt. One of the farmers killed himself by drinking the pesticide he used for his crops. Such instances deeply moved the photographer.

These are important reminders of how climate change has most affected the lives of those who actually have the fewest resources to deal with it, said Borello, whose portfolio includes a few other projects from India.

'Sheroes - After The Acid Attack' explored the lives of acid attack survivors working at the Agra-based Sheores Hangout Cafe. 'Living With The Attacker' charted the journey of Geeta and her daughter, Neetu, who are still living with the man who disfigured them 25 years ago.

"I travel to India almost every year to keep my work up-to-date," added Borella, who has worked with prestigious organisations such as Newsweek, CNN, TIME Magazine and National Geographic USA, among others.

Borella will be back in India again and, for his next project, hopes to explore the phenomenon of melting glaciers in the Himalayan region. "I want to travel to villages in Uttarakhand to study climatic migration," he said.