A month after stand-up comic Munawar Faruqui was arrested over allegations of 'insulting Hindu Gods and Goddesses' during a show, the Supreme Court granted him an interim bail today. Is stand-up comedy a dangerous job?

Stand-up comedy is a dangerous job. A month after stand-up comic Munawar Faruqui was arrested over allegations of “insulting Hindu Gods and Goddesses” during a show, the Supreme Court granted him interim bail on Friday. After initial confusion over his release, he finally walked free from Indore jail on Saturday night.

Eyewitnesses said that the comedian walked out of the jail silently and quietly possibly to avoid a backlash in the wake of accusations made against him. Mediapersons also flocked outside the jail after getting the news of his release.

The incidents of persecution against comedians are not new though. Comics often find themselves vulnerable to offence and attack. On January 1, in MP’s Indore, Munawar Faruqui, a Mumbai-based comedian was taken into custody, following the obstruction of his show in the city’s Café Munroe. Eyewitnesses and video footage claim, the show was disrupted even before it began. He has since, had three bail pleas rejected before the Supreme Court today issued notice to the Madhya Pradesh government and put on hold a warrant against Faruqui in Uttar Pradesh.

Previously, popular comedian Kunal Kamra has had contempt proceedings initiated against him by the Supreme Court of India, and Agrima Joshua has been embroiled in a controversy about allegedly insulting Chhatrapati Shivaji.

The comedy world, centred in Mumbai, while reeling with the impact of the persecution of one of their own, are also trying to keep themselves safe while still doing their jobs. Comedians on their own are not alien to disrupted shows and tension brewing within the four walls of a comedy club. Following Faruqui’s arrest, a Zoom show named Thirst Trap, by five Mumbai comedians (Abbas Momin, Kajol Srinivasan, Andy Reghu, Sriraam Padmanabhan and Dattaprasad) addressed the issue through recounting their own experiences where shows were disrupted and the situation nearly went out of hand. They also spoke about what they did in those situations while establishing, loud and clear, that in most cases, there isn’t much to be done. Comics remain vulnerable to attack, both online and offline.

At one show in an Andheri West bar, Kajol Srinivasan had to make a stealthy exit from the kitchen. “A guy in the audience got up to say he was a chief minister’s nephew and that I couldn’t crack jokes on the chief minister. The situation got out of hand and the staff helped me escape,” she says.

On another occasion, at a Valentine’s Day show for senior citizens, a man walked right up to the stage to let Srinivasan know that he was offended. Here too, Srinivasan had to leave the stage. “I tried to ask him what the problem was and requested him to take a step down. But, he didn’t. It was my stage after all,” she says adding that often bar gigs pose a greater risk than dedicated comedy clubs. Padmanabhan agrees that a lot can go wrong when alcohol is flowing and the comedy act isn’t the centrepiece of the venue. At a bar gig in Pune, he had the mic taken away from him by a bunch of uniformed men. “Firstly, people are not always happy to have the music turned off and replaced by a comedy act. This was one such case. I did an impersonation of Lata Mangeshkar singing ‘Ae Mere Watan ke Logon’ and that’s when trouble began brewing. They were well-built men who didn’t seem happy,” he says adding that in the moment, he chose to de-escalate the situation by cracking a clichéd joke on South Indians. More than a plan, he admits it was survival instinct. 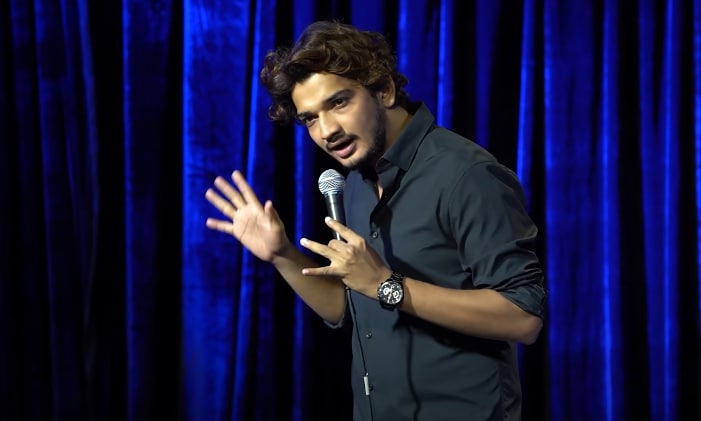 Several comics that I spoke to refused to be named or speak about disrupted shows in the past, they expressed their fear. The threat, they say, is real and playing it safe at the moment, the only choice. “Something that was once reactive has now turned proactive”, says Padmanabhan who also reveals that most comics tend to vet their material legally before they take it to a live show or record a video.

Sanjay Manaktala, a former Bangalore-based comic, remembers an incident in the city where an IT employee in the audience once threw a beer mug at a fellow comic. “It was as good as a weapon. Fortunately, it missed the target,” he says adding that those were different times and it became a part of his set thereon.

While major disruptions aren’t as common in live comedy shows, heckling is something most comics have experienced and dealt with. “And as a comic, you have to address what has happened in the room. You can choose to make a comeback but that is a power you exercise with caution. The comeback shouldn’t turn the audience towards the heckler and against you,” says Abbas Momin adding that he chooses to change track when he sees someone in the audience getting uncomfortable. “Most comics with experience have some kind of backup. Relatability is the shield here and jokes about dating and marriage can help break the tension sometimes,” he says.

For popular comic Radhika Vaz, jokes on herself are the go-to option. However, she first chooses to address the heckler and attempt to take him/her on her side. “But, if someone comes to a show with the intention of taking offence, there is nothing we can do. After all, a comic is alone and vulnerable on stage and there is literally no shield until a bouncer arrives,” she says.

Some of the comics also admitted to re-evaluating their sets in these times and clarifying, repeatedly, that their material is neither political nor religious. “Jokes around politics are an issue these days. The moment you do that, you see an inherent effort towards painting you in villainous light,” says comic Abijit Ganguly who believes that the audience on the internet is more prone to finding an issue with a comic’s work than a live audience that has paid for a performance.

Over the years, comics observe their audiences and find patterns in heckling and the mode of it. “A lot of people interrupt for attention, only. I have seen this especially with men who are at shows with their female partners,” says Aakash Mehta, comic. Srinivasan notes that she on the other hand seldom encounters male hecklers.

There’s the other kind too. Some audience members, Mehta tells us, choose to meet the comic after the act to tell them that they are offended. “Usually, they are informing me not opening up a channel for dialogue. Them I listen to and move on. Then, there are those who want to take action, which has been happening recently. There is nothing you can do about those,” he says.

As a form, Mehta also says, stand-up comedy is open to course correction every few minutes and comics are good at reading the room. Besides, the jokes that make it to a set are often those that have garnered laughs in the past. “We are not here for revolution. We are here to make people laugh. Comics are like Batman, you get the ones you deserve,” he adds.

Vaz, who has been subject to instances of online hate, says that as little as one percent of the audience in a live show will actually vocalise their feelings. “The hecklers are the outliers, always. We don’t prepare for them. We prepare for the rest of the audience that comes to laugh,” she says while cautioning that recent acts of vigilantism don’t fall under the same category. “That (Munawar’s arrest) is heckling the whole country and we are behaving like inexperienced comedians who don’t know what to do,” she says.