As soon as the episode aired worldwide, one of the top-googled searches in India was nothing but 'sweet neem'.

Narendra Modi and Bear Grylls just made a bunch of Indians google "Sweet neem" and we are as intrigued as you are.

Survival expert Edward Michael Grylls popularly known as Bear Grylls was recently on yet another adventurous quest on Man Vs Wild - a wildly popular television series that shows Grylls living on the bare minimum and surviving the wild without any food or contact with the outside world. Only this time, he was accompanied by the Prime Minister of India, Narendra Modi.

Aired on Monday night on Discovery Channel, the duo explored the wilderness of Uttarakhand's Jim Corbett National Park to shed light on the importance of conservation of wildlife and nature, among other things.

While the much-anticipated episode featuring the Indian PM was laced with Modi's life anecdotes, including one where he lived in the Himalayas as a young man, the one-hour-long adventure was complete with challenges nevertheless.

One of the main tasks of the episode that involved the two crossing the freezing river in the pouring Corbett saw Grylls do the usual as he goes about devising a makeshift raft by using anything and everything in sight.

"Yes. Which is also very good for the parasites inside," Grylls responded.

Modi then chimed in and explained how sweet neem was an essential part of Indian households. "In India, we are famous for curry. In Indian curry, this is a permanent requirement," Modi informed Grylls.

And as soon as the episode aired, one of the top-googled searches in India was none other than "sweet neem".

Curious and clueless desi netizens really wanted to know what was the fuss about the seemingly beneficial leaves they were using in their houses. 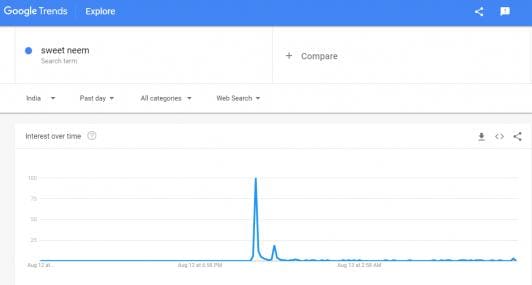 In fact, a simple "sweet neem" search on google prompted results, all of which were related to Bear Grylls and his show Man Vs Wild.

So what really is sweet neem/neem leaf?

They are commonly called Curry leaves or Kadi patta. In an old report published in The Guardian, the herb, which is traditionally used in Indian cuisines, has the potential to control diabetes and even treat cancer. Watching Modi speak highly of the shrub, Twitterati were ecstatic.

I like cooking but I hardly make perfect curry today I got a secret that Sweet Neem is very important in Indian Curry thanks @narendramodi ji for that tip.#ManVsWild

@BearGrylls thank you sir, what an entertaining and courageous man you are, this is probably your first shoot where instead of eating snakes and insects, you ate sweet neem leaves (kadhipatta). @narendramodi ji's veg diet vibrations even changed you ❤... love you both

That sweet neem = curry leaves was news to many that left them bamboozled.

Just heard PM Modi tell @BearGrylls that neem is an essential requirement in Indian currys. Anyone knows what he's talking about? #ManVsWild pic.twitter.com/t584l8JpTb

Apparently, he said "sweet neem". And my whole life has been a lie because I didn't know curry leaves and sweet neem are the same things. But then I haven't cooked a lot of curries myself.