Muslim Women in Delhi's Shaheen Bagh Haven't Left the Streets in 13 Days, And They Don't Plan to Either

For nearly two weeks now, the locals have been sitting there, most of them women and children, holding placards that read 'No to CAA' while the stage is occupied -- with music, shayaris, and the intermittent 'azadi' slogans.

For nearly two weeks now, the locals have been sitting there, most of them women and children, holding placards that read 'No to CAA' while the stage is occupied -- with music, shayaris, and the intermittent 'azadi' slogans.

Shaheen Bagh, Delhi: Gulabi is angry. The anger, in fact, is so intense that she has been sleeping on a thin line of foam sheet that has been laid out on the streets of Shaheen Bagh, for 12 nights now. She is relentless even in Delhi's coldest December in 100 years. "This is our home, no one can ask us to leave our home," she says.

Just a day after students of Jamia Millia Islamia University faced tear gas and batons following their protest against a new citizenship law and a proposed citizens' register that has brought hundreds of thousands of people onto the streets across the country, the locals of Shaheen Bagh decided to start their own form of protest.

A nearly 1-kilometre stretch of a wide, six-lane highway connecting India's capital city with a burgeoning suburb was blocked. A makeshift tent was put up. An assortment of tables was brought in to act as the stage. And, the locals of the area sat there -- all day, all night. 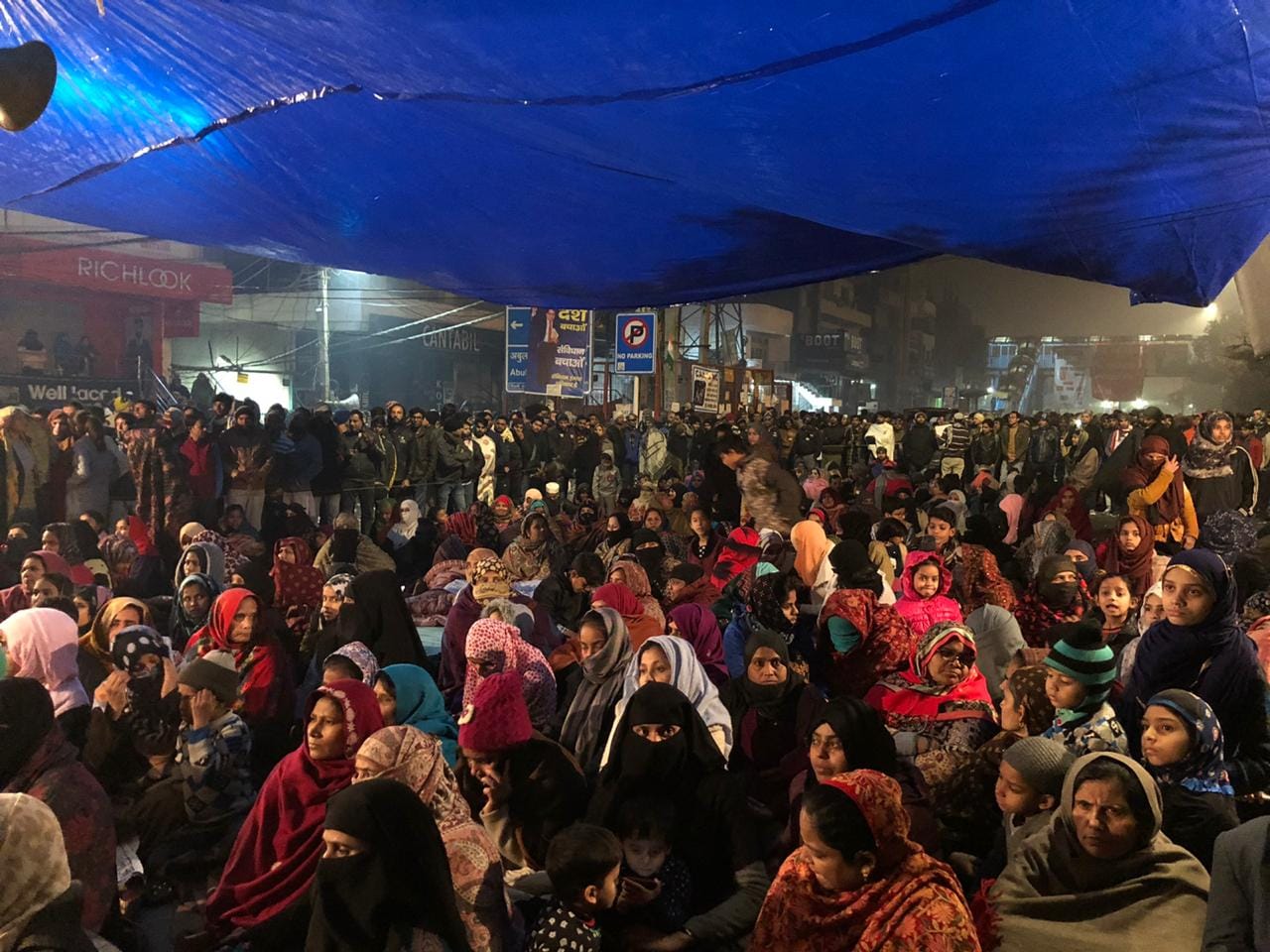 For nearly two weeks now, the locals, most of them women and children, have been protesting, holding placards that read 'No to CAA', while the stage is occupied -- with music, shayari, and the intermittent 'azadi' slogans.

On one of the cold winter nights earlier this week, a student of Jamia and a resident of that area took the stage to recite these words.

It was met with thunderous applause.

Gulabi explains the reason for her anger. "They first scrapped special status for Jammu and Kashmir under Article 370, then they declared that mandir will be made in place where the Babri Masjid existed and now they want us to leave our home. This is an attack on our religion. They don't want Muslims here."

Sakina intervenes. "Arre, they will ask us to leave and we will leave? We have been here since before India was formed and we will remain here. India is our home."

Gulabi and Sakina alternate their night vigil at the protest. "She gets to sleep tonight," says Sakina.

It is past midnight. The locals have now started distributing perhaps the 89th cup of tea and boiled eggs. Gulabi has spent the day sitting at the protest. Now she will go home, feed her children and Sakina's children before going to sleep.

Sana says she comes to the protest every day with her 72-year-old grandmother. The 16-year-old and her grandmother sit on the stairs of the shuttered line of shops that surround the protest area and the stage. Every day, they get there at 5 pm and do not leave till late at night. "They want Muslims to leave the country, that's why we are protesting," she says.

The demonstrations began after the President’s nod to the Citizenship Amendment Act (CAA) that provides non-Muslim minorities from Afghanistan, Bangladesh and Pakistan, who moved here before 2015, a pathway to Indian citizenship. While there have been reports of violence in some areas, and even deaths in large parts of Uttar Pradesh, the locals of Shaheen Bagh are determined. "This is going to be a peaceful protest. We are sitting here for our rights." Once the songs and the slogans are over, it gets a little quiet. This is when the screening of the Libyan war movie Lion of the Desert begins. The film from 1981 is set during the reign of Mussolini and revolves around Libyan leader, Omar Mukhtar. Omar, an Arab Muslim rebel, leads the resistance to the fascist regime.

There's a volunteer group of more than 100 people working in shifts. They arrange for tea, food, programmes, bedding and medicine.

Humera Sayed, a zoology student from Delhi University, runs a team of volunteers who help women protesters access medicines and restrooms. The team had initially appealed to women to be out protesting only till 10 pm. But, she says, they continued staying throughout the night.

Shahnawaz, another student, is responsible for tea and food. "We collected some money from the locals and arranged for food," he says. The volunteers also ensure safety, especially of the local women and the women who come visiting.

"No gents with you?" one of them asks me when I was leaving the protest site at 2 am. I realise they want to ensure there's no crime in the area. Three policemen with a police van and an empty bus stand about 200 metres away from the barricade that the locals have put up. When I say ‘No’, they ask me to walk on the main road. "Be safe," one of them says.

I go back the next night, on Christmas Eve. The crowd is bigger. Right in front of the stage are around 200 women with their children. Behind them, some men are sitting. Outside the square that's made with ropes tied to poles, more and more people come pouring in with every passing hour. The national flag is hoisted on these poles. 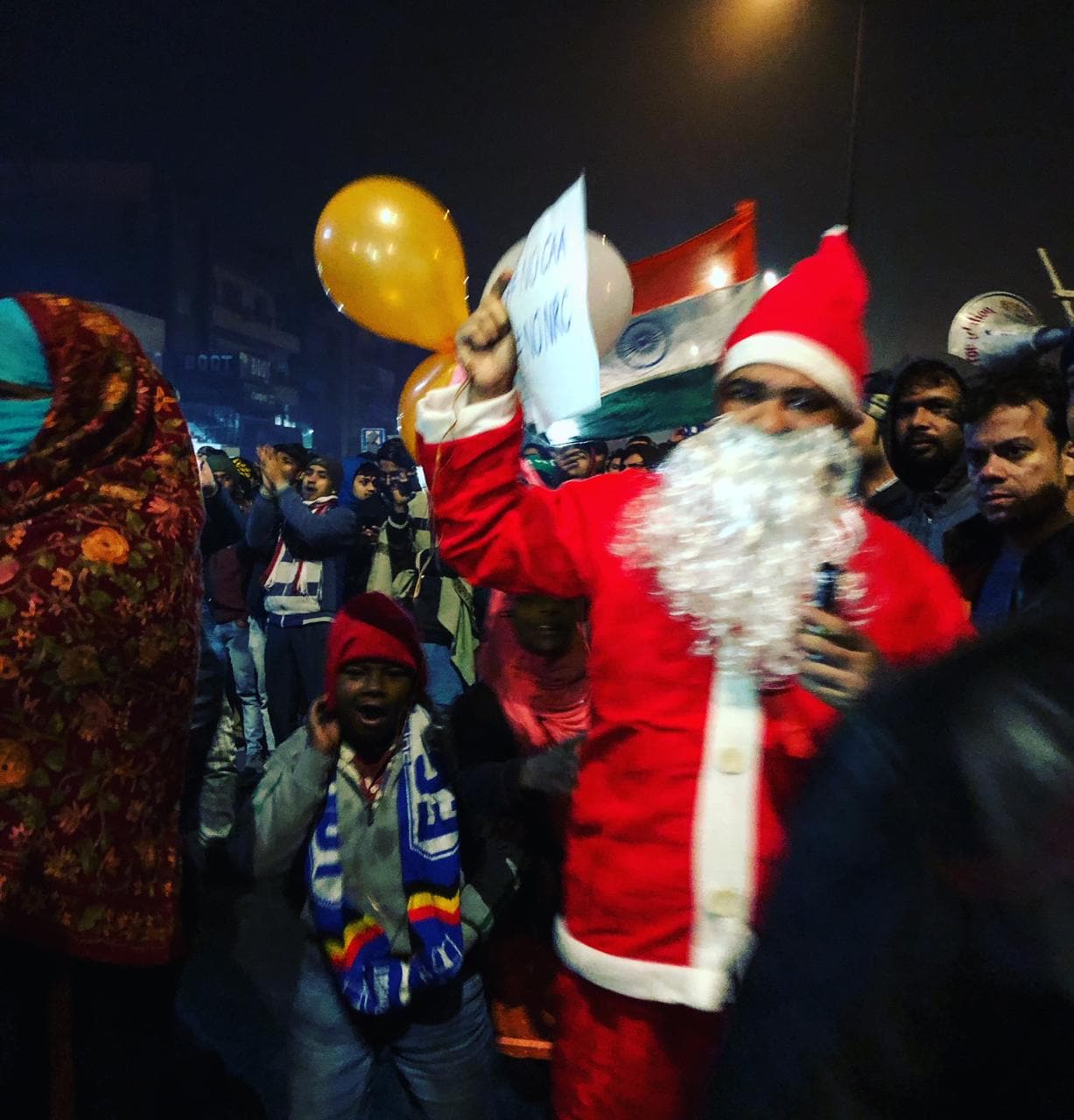 Shama, Sana and Honey share a PG accommodation in the neighbourhood. Sana, a qualified doctor, who is yet to begin her own practice says she hasn't told her parents that she goes to the protest site every night, and sits there for hours with her friends discussing politics and their identities as Muslim women. All three of them are from Bihar.

"There are violent protests in Bihar. At this point, our families would not want us to step out. They won't understand that this is a peaceful one. We feel safe, especially with so many women out here," Sana says.

Honey intervenes and says, "No, that was fake news."

"We just don't know what to believe these days on social media anymore," Shama says.

Just past midnight, a local dressed up as Santa joins the crowd. Holding a placard that reads ‘NO CAA, NO NRC’, he walks around distributing sweets. 'Home' features a lot of times in their placards, their poems, and their songs. "Women have always been at the forefront when it comes to protecting their homes. Why should we step back now?" asks Sakina.

For now, though, they have decided the roads are going to be their home as they prepare for yet another day and night of protest.