Home » News » Buzz » My Father is Sick. We Were Stuck in a Vellore Lodge. This is How We Went Back Home
4-MIN READ

My Father is Sick. We Were Stuck in a Vellore Lodge. This is How We Went Back Home

Basu, who was in Vellore for her father's treatment, finally managed to come back home on May 13 after taking one of the Shramik Special Trains. This is her account of how she got back home.

Tanupriya Basu, an MBA student and Kolkata resident, had been stranded in Vellore, Tamil Nadu with her parents for nearly two months after Prime Minister Narendra Modi announced a nationwide lockdown on March 24 to combat the coronavirus pandemic. Basu, who was in Vellore for her father's treatment, finally managed to come back home on May 13 after taking one of the Shramik Special Trains that the government is plying to transport migrant workers and those stranded in foreign cities.

I had gone to Vellore on February 22 for my father's treatment. My father was diagnosed with laryngeal cancer in 2018 and although he is currently in remission, we still have to keep him under observation because of the side effects of gruelling treatment. That is why we took him to Christian Medical College in Vellore. By the time my father was fit to travel back to Kolkata, the lockdown had been announced.

We had been staying at a small lodge just opposite the hospital. Thankfully, we weren't alone, there were other patients and families of patients stranded there with us. We initially thought we'll fly back before March 24, but flight tickets for the three of us amounted to Rs. 60,000. My mother insisted that we stay back, and we did.

I couldn't believe this was happening. I'd never stayed away from home for so long. Although I live in Delhi, I make it a point to come back home at least once a month to be with my family. We had nothing to do all day. My mother and I took care of my father, watched TV and played games on our phone. What else could we do anyway?

The only silver lining was Vellore municipality slashing lodge rents by half during this period. We had even reached out to ambulance services to see if we could travel to Kolkata by road. But there were two issues. One, the journey would take 48 hours and my father wouldn't be able to endure that. Two, the rates were exorbitantly high. It would cost us more than a lakh to get home in an ambulance. A family staying in the next room paid Rs 80,000 to get to Ranchi in an ambulance while another paid Rs 1.5 lakh to travel to Delhi. We can't afford that kind of money and decided to stay put instead.

A few weeks ago, we found out about the Shramik trains that were going to start between cities to allow migrant workers and stranded people to go back home. We were in a dilemma and were initially confused about whether we should wait for AC trains and flights to resume. But how long could we continue living in a lodge?

I applied for an e-pass online and received a message saying that our names had been registered. The Vellore municipality officials came door to door to help us; they gave us instructions and took down our details.

We were finally going home!

On May 12, before entering the station, officials verified our passes. There were so many people whose passes hadn't been confirmed, and they were turned away. Then a bus took us to the station where only asymptomatic passengers were allowed to enter after a thermal test. We never had to worry about food and water, that was provided to us in abundance. We were given bags containing bread, jam, rotis, sambar and water before boarding the train. Water bottles were provided at regular intervals and we also got sufficient meals all through the day.

Of course, I was scared. We were risking a lot to travel back home. But tell me, what else could I have done? My father is sick. We heard the lockdown would be extended for two more weeks. How could we continue to stay there? It was my father who actually convinced us. He said, "let's go, we'll deal with whatever comes our way." Our train mostly consisted of patients and their families, along with migrant workers. 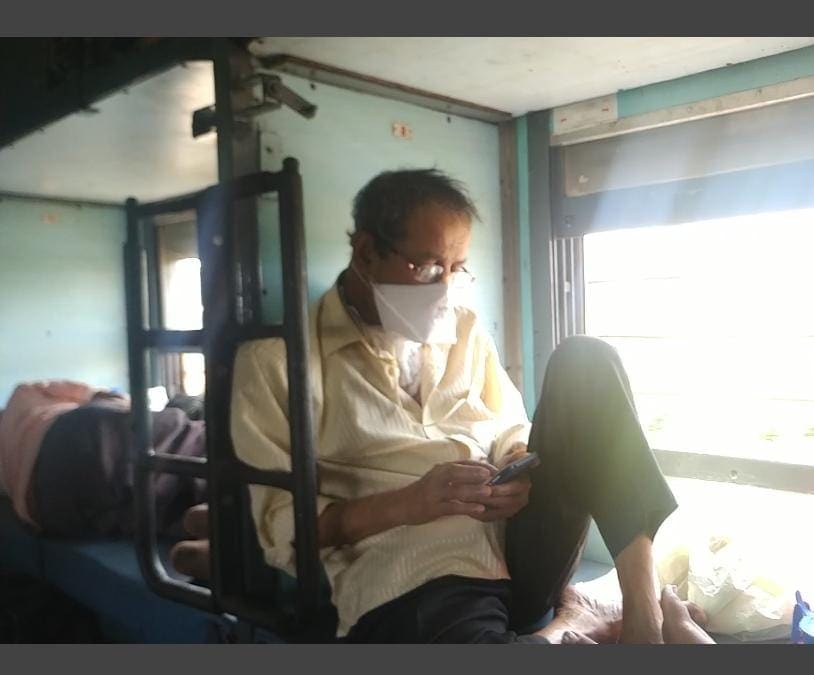 Tanupriya's father, Tuhin Kanti Bose, who had gone to Vellore for his treatment. Photo: Tanupriya Basu

We reached Kharagpur on May 13. At the station, each passenger was given an instruction manual of what to do if someone started showing symptoms. We were also given medicines to take if we developed a fever upon reaching home. All of us were again handed a bag of food to last us till we reached our destinations. We took a car and finally reached Kolkata. I am not exaggerating, but I don't think I've ever felt as relieved as when I stepped into my house after almost three months. I still cannot believe this happened, and I keep turning to my father and saying, "We're home."

We are home, and that's all that really matters.

Basu has also made a video of her journey back home:

As told to Jashodhara Mukherjee.
Tags: