U.S. astronauts Bob Behnken and Doug Hurley, who flew to the International Space Station in SpaceX's new Crew Dragon, splashed down in the capsule in the Gulf of Mexico on Sunday after a twomonth voyage that was NASA's first crewed mission from home soil in nine years.

US astronauts Bob Behnken and Doug Hurley, who flew to the International Space Station in SpaceX's new Crew Dragon, splashed down in the capsule in the Gulf of Mexico on Sunday after a two-month voyage that was NASA's first crewed mission from home soil in nine years.

Behnken and Hurley undocked from the station on Saturday and returned home to land in the waves off Florida's Pensacola coast on schedule at 2:48 p.m. ET following a 21-hour overnight journey aboard Crew Dragon "Endeavor".

The successful splashdown was a final key test of whether Elon Musk's spacecraft can transport astronauts to and from orbit — a feat no private company has accomplished before.

"On behalf of the SpaceX and NASA teams, welcome back to Planet Earth. Thanks for flying SpaceX," SpaceX mission control said upon splashdown.

For the return sequence, on-board thrusters and two sets of parachutes worked autonomously to slow the acorn-shaped capsule, bringing Behnken and Hurley's speed of 17,500 miles per hour in orbit down to 350 mph upon atmospheric reentry, and eventually 15 mph at splashdown.

During reentry to Earth's atmosphere, the capsule's outer shell withstood temperatures as high as 3,500 Fahrenheit while Behnken and Hurley, wearing SpaceX's white flight suits strapped inside the cabin, experienced 85 Fahrenheit.

"Thanks for flying @SpaceX."

A 2:48pm ET, @AstroBehnken and @Astro_Doug splashed down, marking the first splashdown of an American crew spacecraft in 45 years. #LaunchAmerica pic.twitter.com/zO3KlNwxU3

The crew will spend up to an hour floating inside the capsule before joint recovery teams from SpaceX and NASA retrieve them for a helicopter trip ashore. There they will undergo medical checks ahead of a flight to NASA's Johnson Space Center in Houston, Texas. 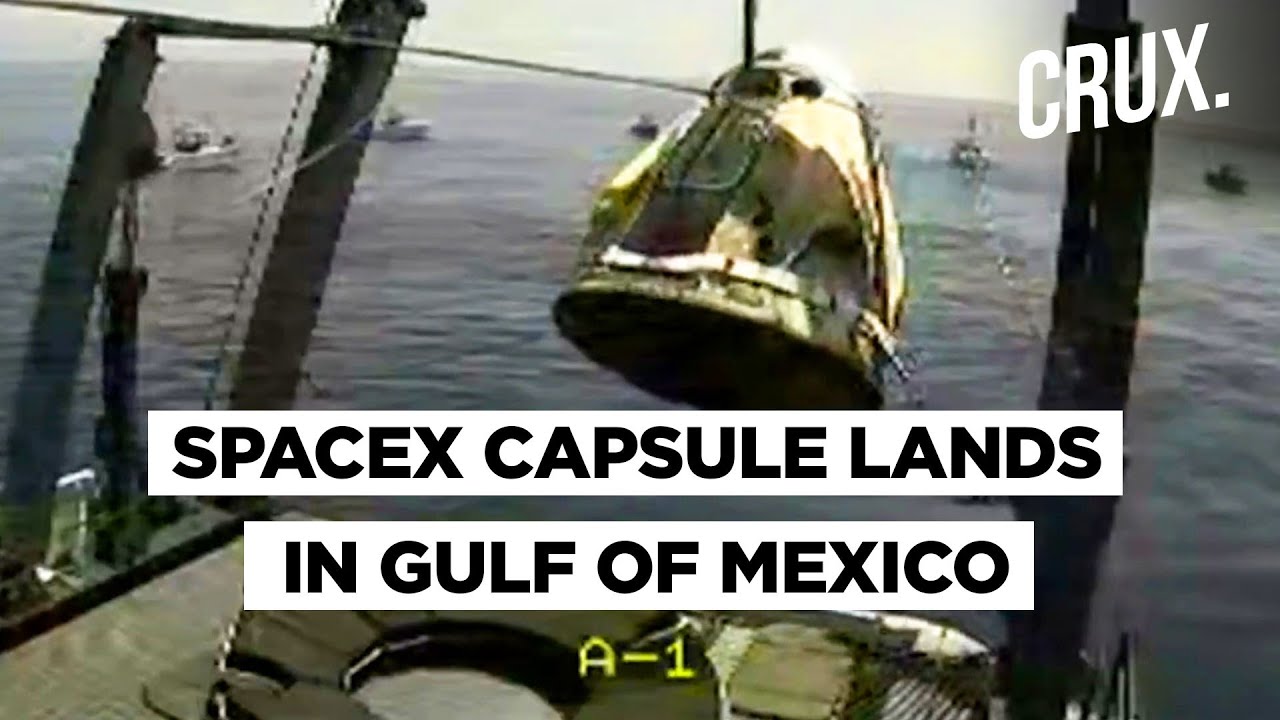 Billionaire entrepreneur Musk's SpaceX became the first private company to send humans to orbit with the launch of Behnken and Hurley, who have spent more than two months on the space station. The landmark mission, launched from NASA’s Kennedy Space Center on May 31, marked the first time the U.S. space agency launched humans from American soil since its shuttle program retired in 2011. Since then the United States has relied on Russia's space program to launch its astronauts to the space station. Behnken and Hurley's homecoming was also the first crewed splashdown in an American capsule in 45 years. The pair undocked from the space station late on Saturday and began gradually decreasing their orbital altitude overnight, awaking Sunday morning to recorded wake-up calls from their sons. "Good morning Dragon Endeavor," Hurley's son said in a recorded message sent to the capsule. "I'm happy you went into space but I'm even happier that you're coming back home."  A historic moment, netizens came out on Twitter and celebrated the splashdown.

.@NASA SpaceX landing is extraordinary. Bravo! Humanity and bravery and science at its best 👏🏻👏🏻👏🏻 #SplashDown https://t.co/eG8ITM2aBv

4 chutes and #Splashdown! Wow – how was THAT???!! So exciting -- but hard for us here on earth to wait and watch!!! Welcome home Bob and Doug -- and Congratulations to @NASA and @SpaceX for a job well done! #DragonSplashDown https://t.co/vQxbguxGGE pic.twitter.com/fmcMfpADMZ

We have #SplashDown!! Standing ovation to #Dragon @SpaceX on a successful mission. Americans are back to space! pic.twitter.com/dczEljpEw1

NASA officials have said Crew Dragon, a pod with seven astronaut seats, was in a "very healthy" condition while docked at the space station, where astronauts conducted tests and monitored how the spacecraft performs in space.

NASA, aiming to galvanize a commercial space marketplace, awarded nearly $8 billion to SpaceX and Boeing Co collectively in 2014 to develop dueling space capsules, experimenting with a contract model that allows the space agency to buy astronaut seats from the two companies.