Launched on July 23, 1999, the observatory allows scientists to capture X-ray images of various high energy regions in the universe.

NASA has released some stunning and phenomenal images of the Universe -- galaxies, supernova remnants, stars, planetary nebulas processed by its 'Chandra X-Ray Observatory' -- the world's most powerful x-ray telescope.

Launched on July 23, 1999, the observatory allows scientists to capture X-ray images of various high energy regions in the universe. X-rays were produced in the cosmic world when the matter heats up to millions of degrees. They are emitted from black holes, neutron stars, or supernova remnants.

Each composite image released by NASA contains X-ray data from Chandra as well as other telescopes. The objects represent a range of different astrophysical objects and include the galaxy Messier 82, the galaxy cluster Abell 2744, the supernova remnant 1987 A, the binary star system Eta Carinae, the Cartwheel galaxy, and the planetary nebula Helix Nebula.

The International space agency took to micro-blogging site Twitter and shared beautiful images of the cosmic world with the caption, "Observing our universe in different kinds of light Milky Way". 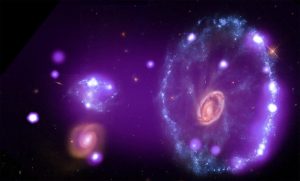 "Each of these images combines data from our @ChandraXray Observatory with data from other missions," NASA wrote. The compilation gives examples of images from different missions and telescopes being combined to understand better the science of the universe.

Each of these images contains data from NASA's Chandra X-ray Observatory as well as other telescopes.

Various types of objects are shown (galaxies, supernova remnants, stars, planetary nebulas), but together they demonstrate the possibilities when data from across the electromagnetic spectrum are assembled.