Aramco Impact: The multiple drone strikes on Saudi Arabia’s Aramco over the weekend have impacted global oil supplies from that country and turned global oil prices volatile. As the government continues to avoid using the term “slowdown” to describe weakening growth in the Indian economy, the prospect of an increase of anywhere between Rs 5-6 in pump prices of fuel as early as next fortnight may be the worst possible news. Read more.

NRC Foul: Assam Public Works, the main petitioner of National Register of Citizens (NRC) in the Supreme Court, has demanded that the entire NRC process be investigated by government's nodal agencies to detect anomalies in the inclusion of illegal Bangladeshis. Several civil society groups are unhappy with the final list as they allege that the final list excluded many "sons of the soil". Read more.

Extradition Denial: Union External Minister S Jaishankar said the issue of Zakir Naik's extradition had come up during Prime Minister Narendra Modi's meeting with his Malaysian counterpart, contradicting the latter's statement where he said India had not asked for the controversial Islamic preacher. He said India has already placed a request with Malaysia for Naik's extradition in January and it want him back. Read more.

More Interest: Labour Minister Santosh Gangwar said over 6 crore EPFO members will get 8.65 per cent interest on their deposits for 2018-19. The Central Board of Trustees — the apex decision-making body of the Employees' Provident Fund Organisation (EPFO) — had approved 8.65 per cent interest rate for the last fiscal in February this year. Read more.

Justice Demanded: A select group of members of the Indian Institute of Management, Bangalore have written to Prime Minister Narendra Modi appealing for a fresh probe into the mob lynching case of Tabrez Ansari in Jharkhand. Last week, Jharkhand Police had scaled down charges — from murder to culpable homicide not amounting to murder — against the 11 accused in the lynching case of Ansari. Read more.

It is close to a month since Sonia Gandhi took over the reins of the Congress for the second time when the party was facing its worst-ever crisis. The Congress Working Committee zeroed in on Sonia Gandhi last month after looking at various options, hoping that she could bring the party back on track. No doubt, Rahul Gandhi’s sudden resignation had plunged the party into a serious leadership crisis and it will be a stupendous task to restore its health. Read this piece by Kalyani Shankar who argues that forced to the front line once again, how Sonia Gandhi faces an unenviable task of reinventing the crisis-hit Congress. 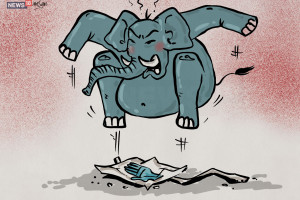 Bahujan Samaj Party chief Mayawati hit out at the Congress and termed it an “unreliable” party after all six of her party MLAs switched over to the grand old party in Rajasthan.