News18 Wrap: Northeast On the Boil Against CAB, SC to Hear Nirbhaya Convict's Review Plea & Other Stories You Missed

CAB Protests: Thousands of people defied curfew in Guwahati on Thursday and took to the streets, prompting police to open fire, even as protests against the contentious Citizenship (Amendment) Bill intensified in Assam. The residence of a BJP MLA in the capital city was also set ablaze. Protests intensified in Tripura, where the Army conducted peace marches and in Meghalaya's capital Shillong, where several shops in the commercial centre were vandalised and vehicles were torched. Follow more here.

Nirbhaya Convicts: The Supreme Court on Thursday said it would hear a review petition by Nirbhaya case convict Akshay Singh Thakur on December 17, amid mounting speculation that the four men convicted in the rape-and-murder case may be executed soon. Meanwhile, the Tihar Jail in Delhi has asked Uttar Pradesh to provide two hangmen on short notice. Read more.

Inflation Spike: In twin shocks for the economy that is battling a prolonged slowdown, the retail price based consumer inflation has spiked to a three-year high while the index of industrial production has contracted, official data showed. According to data released by the statistics office, consumer inflation spiked 5.54 per cent in November on the back of costlier food items, compared to 4.62 per cent in the month of October. Read more.

Maharashtra Cabinet: A fortnight after Uddhav Thackeray was sworn in as the chief minister, the Maharashtra Vikas Aghadi coalition government on Thursday finally distributed portfolios after hectic parleys. The Sena has kept the home ministry with Sharad Pawar’s Nationalist Congress Party. All the other key ministries have been divided between the six ministers - two each from Sena, NCP and Congress. Read more.

Ayodhya Petitions: The Supreme Court on Thursday dismissed all the review petitions challenging a Constitution Bench's order in the Ayodhya case that had cleared the way for construction of a Ram Temple at the disputed site. With the rejection of these review petitions, the consequential request of parties for an open court hearing on these pleas also get dismissed. Read more.

Trumps vs Greta: President Donald Trump lashed out at 16-year-old climate activist Greta Thunberg on Thursday, a day after she was named by Time as its Person of the Year, calling her selection “ridiculous." She has drawn large crowds with her fiery appearances at protests and conferences over the past year and a half. In tweet, Trump said, “Greta must work on her Anger Management problem, then go to a good old fashioned movie with a friend!” and added: “Chill Greta, Chill!” Read more.

I see many people being frightened by the opportunities provided in the Indian Citizenship (Amendment) Bill of 2019, and planning to step back from the title of ‘a nation of diversity, freedom, and humanitarianism’ for imagined slights and unnecessary conditions. Our political parties thrive at the opportunity of opposing each other, for we thrive in chaos and when someone else fails. Perhaps it’s time to stop thriving by stepping onto someone else’s back. But, look closely at who fails if this Bill isn’t passed: it’s the people who are living in our country and are part of our economic strength, it’s the people who have grown to love our chaos. We are hurting millions who have anxiously been waiting for their turn to call themselves ‘Indian’. It’s so easy to throw jabs at Trump when he ups the visa regulations making it difficult for foreign nationals, but we can’t rise up to the occasion to show the world that we care with our current attempts at reforms. Read the piece by Lalita Nijhawan, who argues that Citizenship Bill is India’s moral and constitutional responsibility, a humanitarian relief for persecuted minorities. 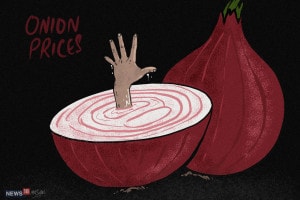 'Peeling back the days: The year of the onion' – An Autobiography