Odd-Even Scheme: Delhi Chief Minister Arvind Kejriwal announced that the odd-even road rationing scheme will come into effect in the city from November 4-15 to combat high-level of air pollution caused due to stubble burning in winters. The scheme is a part of the seven-point 'Parali Pradushan' action plan that includes mass distribution of anti-pollution masks and other things. Read more.

No Relief: A Delhi court sent Karnataka Congress leader DK Shivakumar to judicial custody till September 17 in a money laundering case. However, the court told the Enforcement Directorate that it should take care of Shivakumar's medical requirements first and only then ask him questions. Read more.

Plea Denied: A Delhi court dismissed a plea by former finance minister P Chidambaram, lodged in Tihar jail in the INX Media corruption case, seeking to surrender in the money laundering case. Special judge Ajay Kumar Kuhar junked his plea. The ED had told the court that his arrest was necessary and it will do so at an appropriate time. Read more.

Saradha Scam: In a major setback for former Kolkata Police Commissioner Rajeev Kumar, the Calcutta High Court withdrew the interim protection from arrest given to him in connection with the Saradha chit fund scam. It also rejected his petition for quashing of a CBI notice that sought his appearance for questioning in the case. Read more.

Hoarding Kills: Coming down heavily on the Tamil Nadu government over illegal hoardings, the Madras High Court on wondered how many more lives should be lost as a result of such banners. This came after a 23-year-old techie was crushed to death by a water tanker as an illegal flex board crashed on her in Chennai. Read more.

Low Education: The reputation of the country’s higher education system hit a new low when no Indian institution found a place in the top 300 positions of a prestigious international league table for the first time in years. However, the director of IIT, Delhi, has countered this saying if the fundamentals of a university are strong, the rankings will follow. Read more.

When Justin Welby, the archbishop of Canterbury, prostrated in front of the Jalianwala Bagh memorial on September 10, the picture made it to eight columns of the front page of The Times, London, just as the news was received with a sense of awe around India and Britain. The apology from the British will set a precedent, which has the potential to lead to several apologies they might have to offer for the criminal excesses of their colonial rule. However, Binoo K John argues that the archbishop’s apology for Jallianwala Bagh Massacre although is a big step, but we must not expect UK to admit the mistake officially. 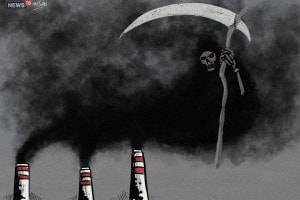 The air pollution level in Delhi remains low in 11 months of a year but picks up in November due to stubble (parali) burning in the neighbouring states. Dense cloud of smoke covers Delhi, which becomes a gas chamber, the chief minister said.