Outrage over Rape: Death penalty for rapists, lynching of convicts in public and castration of those convicted were among demands made in Rajya Sabha on Monday as MPs expressed outrage over the Hyderabad rape and murder case and other such incidents in the country. Members cutting across party lines condemned the recent spurt in crime against women and demanded stringent laws that punishes the guilty within a fixed time-frame. Read more.

Worst FinMin: Finance Minister Nirmala Sitharaman during her speech in the Lok Sabha on Monday said that she has been told that she is the worst finance minister. The Finance Minister recently drew flak for India’s worsening economic health. India’s gross domestic product (GDP) growth rate slipped to 4.5% for the July-September quarter of the ongoing financial year. Read more.

NRC Deadline: BJP chief Amit Shah on Monday set a 2024 deadline for implementing the hugely divisive NRC across the country, asserting "each and every" infiltrator will be identified and expelled before the next general election. Shah said national issues like uprooting terrorism, naxalism and construction of a grand Ram temple in Ayodhya were as important in the Jharkhand elections as local matters like development. Read more.

Major Violation: Congress leader Priyanka Gandhi suffered a grave security breach on November 26, barely weeks after her SPG cover was removed, when a car with five passengers made its way into her residence. Gandhi’s office revealed on Monday that the group went up to her and was able to click pictures of the Z-plus protectee. The breach has triggered a blame game between the Delhi Police and the CRPF on who allowed the car to enter the premises. Read more.

Uprooted Lives: Bangladeshi immigrants arrested in October narrate how they crossed over into India in groups of two and three and worked in Bengaluru for several years. But now they face uncertainty as neither India, nor Bangladesh wants them. The crackdown on illegal immigrants had led to an exodus-like situation in the nearby areas, with many fleeing the city or disappearing from their usual spots. Read more.

First Woman: Sub Lieutenant Shivangi Swaroop, the first woman pilot of the Indian Navy, will join naval operations on Monday, two days ahead of Navy Day on December 4 upon completion of operational training. Speaking to CNN-News18, Swaroop said that she feels lucky to be a part of 'history'. Read more.

Lock up women. Lynch the accused. Blame alcohol and mobile phones (and also the victim). The tell-tale responses from lawmakers, politicians and police officers following the brutal rape and murder of a veterinary doctor on her way home from work in Hyderabad have done everything but answer the burning question on everyone's minds - how to make women safe in India? And yet, a familiar cycle of blame-game, ridiculous solutions and victim shaming has played out on national media. It seems that those in charge of ascertaining the safety and security of women in the country have no idea what they are talking about. Read the piece by Rakhi Bose, who argues that Even as the nation comes to grips with the brutality of the Hyderabad rape-murder case, those in-charge of making women feel safe have done nothing but come up with excuses. 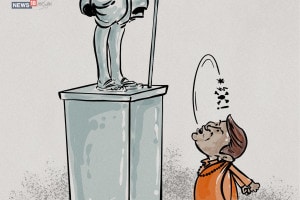 'If anyone is hurt, I apologise. But...' Pragya Thakur remains defiant after Godse remark.