Alwar Lynching: A court in Rajasthan's Alwar on Wednesday acquitted all six accused in the Pehlu Khan lynching case. The verdict was pronounced by the court of the Additional District Judge in Alwar. Khan, a 55-year-old native of Haryana’s Nuh, had left his village to purchase cattle in order to increase milk produce for Ramzan. Surrounded by a mob of cow vigilantes on the Delhi-Alwar highway on April 1, 2017, he tried to save himself by showing his purchase receipts, but was lynched with rods and sticks. Sher Mohamed, head of Meo panchayat, said they would appeal the decision in the high court. Read more.

Preventive Custody: Former IAS officer-turned-politician Shah Faesal was stopped from leaving the country on Wednesday. He was detained from Delhi airport and was sent back to Srinagar, where he was taken into 'preventive custody,' a top officer told reporters. According to the sources, Faesal was scheduled to fly to Istanbul on a Turkish Airlines flight on Wednesday. He was detained at Delhi's Indira Gandhi International airport at 5:30 am based on a lookout notice issued by the Jammu and Kashmir Police. Read more.

Flood Report: After Kerala and Karnataka, Andhra Pradesh is on alert following rising water levels in Krishna River. Authorities are keeping an eye on Kurnool and Vijayawada along with about 48 villages along the river bank. Meanwhile, the death toll in Maharashtra rose to 48, while Kerala was put on alert as floods battered the states, killing over 200 people and causing widespread damage. Odisha, which has been lashed by heavy showers since last week, on Tuesday saw a flood-like situation in parts of the state and the forecast is of more rains in the next two days. Read more.

Stray Protests: The Jammu and Kashmir police on Wednesday said some people sustained pellet injuries during “stray” protests in Srinagar over the weekend when restrictions imposed in the wake of repeal of Article 370 were relaxed. Addressing a press conference, Additional Director General of Police Munir Khan said the law and order situation has been "totally under control". "There have been localised incidents in various parts of Srinagar and other areas, which have been contained, dealt with locally. There has been no major injury to anyone. There have been a few pellet injuries, who were treated and sent back." Read more.

Pending Dues: It has been the same story over the past two years, at least. About 240 private hospitals in Telangana have decided to withhold their services under the state’s free health benefit scheme, Aarogyasri, over pending dues. According to the Telangana Network Hopsitals Association (TANHA), an amount of about Rs 1,500 crore is yet to be cleared and these dues have accumulated over years. The association has set a deadline of August 15, failing which the hospitals would boycott services from August 16. Read more.

TMC to BJP: Former Kolkata mayor and Trinamool Congress MLA Sovan Chatterjee joined the BJP on Wednesday. Chatterjee, a former minister of the Mamata Banerjee government, joined the party in the presence of its senior West Bengal leader Mukul Roy and its general secretary Arun Singh. Welcoming Chatterjee, Roy said he was one of those leaders who has made a big contribution to Banerjee's rise to the post of chief minister. "He will now strengthen the BJP... Let me repeat that TMC will not even get the status of the opposition party," Roy said. Read more.

Ladakh, by the recent amendment of the Constitution, has been made into a Union Territory. The manoeuvre used by the government to separate Ladakh from the erstwhile state of Jammu & Kashmir to resolve the Kashmir crisis would not have been possible but for the valiant efforts of Indian soldiers in first defending the area from tribal raiders in 1947-49, and later securing it for seven decades in the most inhospitable situation. The accession of Jammu & Kashmir to India and swift entry of the Indian army in the autumn of 1947 did not discourage Pakistan enough to give up its plan. Governor General Mohammed Ali Jinnah took matters in his control and supervised the invasion of Kashmir by the Frontier tribesmen. In the initial months, due to the severity of winter, Ladakh did not get sufficient focus and was left under the charge of soldiers belonging to the J&K State Forces of the erstwhile princely state. Read more about it in the piece by Sidharth Mishra. 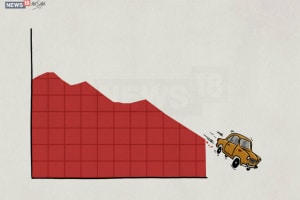 India’s famed automobile sector has been hit by a severe slowdown for many months now and its unprecedented sales decline has ceased to surprise. The latest numbers have instead begun raising severe concerns.