PM Jabs Chidambaram: Prime Minister Narendra Modi said the NDA 2.0 government's pledge is to rein in corruption, terrorism and take union territories in Jammu and Kashmir to height of development. In a dig at former Union Home Minister P Chidambaram, Modi said earlier some people thought they were above law and courts, but his government's commitment and pledge is to control corruption. Read more.

Guide to Economy: In a scathing attack on the Modi government, former Prime Minister Manmohan Singh has said it may take a few years for the country to get out of this slowdown, provided the Centre. Calling for the Centre to come out of its habit of “headline management”, Dr. Singh, an eminent economist himself, said the “first step in a crisis is to acknowledge that we are facing one.” Read more.

Muslims for Modi: Jammu and Kashmir is an integral part of India and Pakistan’s attempts to project on the global stage that Indian Muslims are opposing their own country are condemnable, says the Jamiat Ulema-e-Hind, a leading group of Islamic scholars. The organisation also agrees that the Centre’s implementation of National Register of Citizens (NRC) should be nationwide. Read more.

Mamata Warns BJP: West Bengal chief minister Mamata Banerjee took out massive a rally against BJP’s attempt to bring National Register of Citizens (NRC) across the country and warned the BJP not to play with fire in the name of NRC. In a veiled attack at the BJP, Banerjee said vested interests are trying to break the backbone of Bengal’s unity on communal lines. Read more.

Auto Downturn: India's auto ancillary units hit hard by sales slump as one of the world’s biggest industrial zones sees large-scale shutdowns and lay-offs. Two hundred of 320 workers have been ‘let go’ between July and August from an automotive group in Bengaluru and the company's wondering about the oft-thought-of question: what next? Read more.

Supreme Court 'Ours': The Supreme Court has deprecated statements by Uttar Pradesh minister Mukut Bihari Verma, who said temple will be constructed in Ayodhya since "Supreme Court is ours". A Constitution Bench headed by Chief Justice of India Ranjan Gogoi took a grim view of such statements and issued a caution against irresponsible conduct. Read more.

The rough exteriors we have encouraged our boys to cultivate, cover up a depth of pain that can go along with growing up as a boy. While society speaks openly about the obstacles that accompany girls’ success in school, family, and the workplace (which are extremely crucial to tackle), we are nearly silent about the burdens that are borne by boys and men. And conversations on whether it is ‘okay’ for men send signals to young men as they’re growing up that they should remain silent about their pain. Read the piece by Ratna Gill, who argues that the message we send when we berate male leaders for showing emotion has a serious impact on adolescent boys. 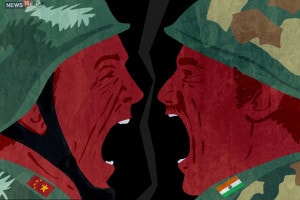 Indian and Chinese troops face off in Ladakh ahead of Modi-Xi summit although Army says tension have been de-escalated.