The swearing-in ceremony of PM Modi at the Rashtrapati Bhavan is expected to be a grand affair with about 8,000 guests, including leaders from the BIMSTEC countries, opposition leaders Rahul Gandhi and Sonia Gandhi, chief ministers, corporate honchos and film stars. Follow the swearing-in ceremony LIVE with News18.com.

Smriti Irani, Rajnath Singh, Nirmala Sitharaman, Prakash Javadekar, Babul Supriyo and several other names were among more than 40 BJP leaders to receive a call-up for Narendra Modi’s second cabinet. Among the names are also leaders of other NDA constituents, including Shiv Sena, JD(U), Akali Dal, LJP and AIADMK. Read the full list of 56 names likely to be part of Modi 2.0 Cabinet. 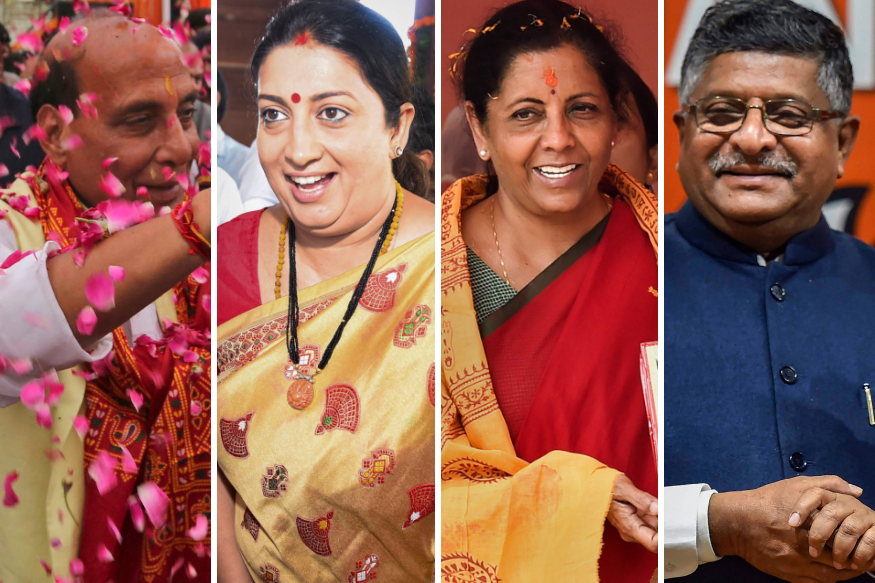 In an anti-climax of sorts, however, Nitish Kumar’s JD(U) has decided to not join the cabinet, upset with just one of its leaders, RCP Singh, being given a berth. The JD(U) had won 16 of the 17 seats it contested in Bihar in alliance with the BJP. Read more.

It may not have had a successful run in the Lok Sabha elections, but the AIADMK is set to make a comeback in the Union cabinet after a gap of 20 years. The party’s lone MP in the Lok Sabha, OP Ravindranath Kumar, the son of Tamil Nadu deputy chief minister O Panneerselvam, will reportedly be part of Narendra Modi’s second cabinet and received a phone call informing him of the same on Thursday morning. Read more.

YSR Congress chief Yeduguri Sandinti Jagan Mohan Reddy was sworn-in on Thursday as the second Chief Minister of Andhra Pradesh post its bifurcation. Governor E S L Narasimhan administered the oath of office and secrecy in a grand public function at the IGMC Stadium in nearby Vijayawada, to the 46-year-old leader who led his party to a resounding victory in the recent Assembly and Lok Sabha elections. Read more.

onsidered the most successful minister in Narendra Modi’s first government, former highways and shipping minister Nitin Gadkari is likely to be part of the new cabinet as well. Sources said Gadkari received a phone call to the effect on Thursday morning, hours before Modi’s swearing-in along with the Union Council of Ministers. Read more.

With Babul Supriyo’s victory over TMC’s Moon Moon Sen with 1.97 lakh votes, the Bollywood singer-turned-politician is once again likely to get a cabinet berth. Read more.

If Rahul Gandhi indeed relinquishes office of the Congress president and remains as a Member of Parliament, the grand old party may see a tussle of another kind — between the parliamentary wing of the party and the organisation, i.e. the All India Congress Committee (AICC). Rasheed Kidwai writes how Rahul Gandhi may get the chance to pick the Congress PM one day, given he quits his dream to become one. Read more. “The offer made by the BJP was not acceptable to us. But we are firmly with the National Democratic Alliance. But we will not join the government,” Nitish Kumar said as JD(U) pulled out of the swearing-ceremony in the nick of time to protest against the single ministerial birth in Modi 2.0 cabinet.