Tensions in Kargil: Several people were detained in Kargil on Thursday after they defied restrictions and took out a rally to protest against the revoking of Article 370 of the Constitution which gave special status to Jammu and Kashmir. The government's move to scrap special status and bifurcate the state has been met with resentment in the Muslim majority region, which identifies culturally more with Kashmir, but has been placed under the Ladakh union territory after bifurcation. Read more.

Downgrading Ties: India on Thursday termed Pakistan's announcement to downgrade diplomatic ties with it as an attempt to present an alarming picture to the world about relations between the two countries. The Ministry of External Affairs said the Constitution was, is and will always be a sovereign matter and recent developments pertaining to Article 370 are entirely India's internal affair. Reacting to India's decision of scraping Article 370, Pakistan on Wednesday expelled Indian High Commissioner Ajay Bisaria, and called the move "unilateral and illegal." Read more.

Urgent Dialogue: There is an "urgent need" for dialogue among all actors to reduce tensions and to avoid a potential military escalation in South Asia, the United States said on Wednesday, hours after Pakistan expelled the Indian envoy and downgraded its diplomatic ties. The official added that the Indian government "did not consult or inform the US government before moving to revoke Jammu and Kashmir's special constitutional status". Read more.

NMC Bill: President Ram Nath Kovind has given his assent to the National Medical Commission Bill, 2019, which was passed by both Houses of Parliament, Union Health Minister Harsh Vardhan said on Thursday. The minister said it is a progressive legislation which will reduce the burden on students, ensure probity in medical education, bring down costs of medical education, simplify procedures, ensure quality education, and provide wider access to people to quality healthcare. Read more.

Rain Alert: Heavy rains in Kerala over the last 24 hours have claimed six lives, while nearly 6,000 people have been evacuated and shifted to relief camps. A red alert has been sounded in Idukki, Kozhikode, Wayanad and Malappuram districts of the state, with eight other districts on orange alert. Meanwhile in nine people died in Maharashtra's Sangli as a boat carrying about 30 capsized during rescue operations. As many as 16 have been rescued, while others remain missing. Read more.

Not only did the Congress fail to mobilise opposition on the Kashmir issue, but even many of its MPs did not know the party line on Article 370. The Gandhi family appears to be losing its grip on the party with the continuing delay in choosing a successor to Rahul Gandhi.The party has been headless for more than two-and-a-half months. In the meantime though, the Congress Working Committee, the highest policy-making body of the party met twice — once to finalise about Rajiv Gandhi’s 75th birth anniversary celebrations and on Tuesday about coming up with the party’ stand on the scrapping of provisions in Article 370 and Article 35A, and the bifurcation of Jammu and Kashmir. There seems to be no hurry in choosing the next Congress president..read more about it in the piece written by Kalyani Shankar. 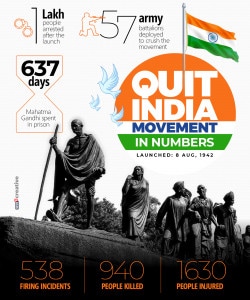