Gates has been actively trolled and discredited via viral fake news posts since his public attack on the Trump administration's handling of the coronavirus crisis.

Even a sthe whole world strives to develop a vaccine against the deadly coronavirus, anti-vaxxers in the UK and US seem to be making most of the lockdown by spreading conspiracy theories against billionaire Bill Gates.

The Microsoft founder is also the founder of the Bill and Melinda Foundation which has been actively involved in immunization efforts against diseases like polio in countries with a high incidence of the disease such as India.

It appears that anti-vaccine "activists" or anti-vaxxers have been getting together in secret Facebook groups to spread fake news about Gates and his "India vaccine".

In a post that appeared in a closed Facebook group on April 13, an anti-vax activist and nurse from the United Kingdom claimed that between 2000 and 2017, the Foundation had "paralyzed 496,000 children" in India while testing for a new polio vaccination. 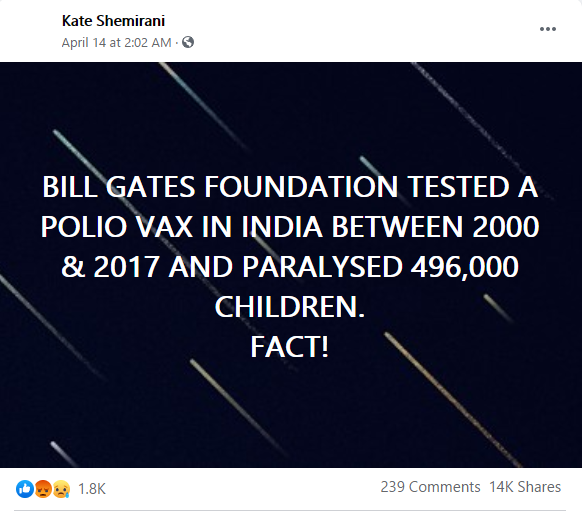 The post was made by a nurse living in England whose Facebook timeline shows her to be stoutly against the coronavirus lockdown in place in UK to counter the spread of the virus. Much like anti-lockdown covidiots in the US who have been taking to streets to protest against "government tyranny" in imposing social distancing rules, the nurse has been part of similar protests in the UK.

A fact-check conducted by Politifact further revealed that the viral post was indeed fake and attempting to spread misinformation against Gates.

The investigation further revealed that the original post regarding the fake news appeared first on Instagram on April 9 when Joh F Kennedy's nephew and an active anti-vaxxer Robert F Kennedy.

Kennedy is at the forefront of the anti-vax movement in the United States and has often been blamed for spreading anti-vax ads and propaganda on Facebook. A study published in November 2019 in the journal 'Vaccine' found that out of a total of 145 anti-vaccine advertisements that ran on Facebook May 31, 2017 and February 22, 2019, 54 percent were made from the the the World Mercury Project page and the Stop Mandatory Vaccination group. Both the groups are run by Kennedy.

Following his fake Instagram post about the India vaccine, right-wing websites like BL, which has publically pro-Donald Trump inclinations, picked up the post and published it as fact without running, it seems, any fact checks whatsoever.

A scan of Indian media reports from 2002 to 2017 also showed no such records of children getting paralysis due to vaccine testing.

While the Gates Foundation has actively donated to efforts made by India in combating polio, Bill Gates has recently been targeted by right-wing trolls on social media platforms like Facebook, Twitter, YouTube and others.

Though anti-vaccinators and right wings trolls have never loved Gates, the targeted trolling began following a column Gates authored in The Washington Post on March 31, in which he criticised Donald Trump's failure to contain the coronavirus crisis in the US. He further went on to say that only a vaccine could save humanity against coronavirus today. Before that, he had condemned the White House's decision to cut funding to the World Health Organisation at a time of a global public health emergency.

Since then, Gates has been targeted by various trolls including anti-vaxxers belonging to anonymous online communities like QAnon who have tried to prove Gates as the creator of COVID-19 in an attempt to discredit the Trump administration and make profits out of the pandemic.