Has India's Air Quality Fallen Again Due to Cracker Bursting for 9 Minutes on April 5?

A firecracker goes up as flash lights and candles are seen on the roof tops and high rise residential buildings as Indians mark the country's fight against the Covid-19 pandemic in Greater Noida, a suburb of New Delhi. (Image: AP)

In most places, the air quality had been within safe levels till Saturday which marked 12 days since the lockdown was announced.

On Sunday, at 9 pm, Indians responded to Prime Minister Narendra Modi’s call to light diyas and candles from their balconies and terraces to show solidarity during the 21-day total coronavirus lockdown. While PM Modi had specifically asked for people to light candles and flashlights or mobile torches, many decided to take it one step further and burst firecrackers.

The country at present is in the middle of a lockdown in order to contain the spread of COVID-19 which has already affected more than 4000 people and claimed at least a hundred lives in India. Yet, when PM Modi asked Indians to light candles, many misinterpreted it as a call for an early ‘Diwali.’

In the past few weeks, pollution levels across cities had drastically gone down, thanks to people staying indoors due to the lockdown. Construction services have been temporarily halted while factories and industries manufacturing non-essential goods have been shut down till further notice, further bringing pollution down. Studies and government data show that industrial pollution accounts for at least half of the pollution in the country, especially in populated cities like Delhi, Mumbai, Kolkata, Bengaluru and so on.

Moreover, traffic has been reduced to a minimum in metropolitan cities around the country. In the last two weeks, people had become used to azure skies, animals roaming freely in the streets and the sound of birds chirping – all a result of reduced human activity outdoors.

All this, however, was before 9 pm on Sunday when some Indians decided to step out in large numbers with candles in hand to respond to the PM’s call and even burst crackers.

We compared Air Quality Index levels of various cities on Monday with the AQI on Saturday to check if the quality of air had really deteriorated after some took Modi’s ‘Diya Jalao’ mission a bit too seriously.

And yes, the results were startling.

In most places, the air quality had been within safe levels till Saturday which marked the twelfth day of the lockdown. However, AQUI turned ‘unhealthy’ and mildly hazardous post-April 5. Safe to say, the nine minutes of firecrackers and merrymaking at 9 pm Sunday may have had something to do with the sudden spike.

In Delhi, we compared the air quality at Patparganj on April 4 and April 6 and found a sharp decline. However, a report by Indian Express also suggests that changes in wind speed might have something to do with the fall in AQI. The report suggests that there has been a sudden dip in wind speed; this may be marginal but can have an impact on AQI. According to the report, the AQI in Delhi is likely to remain the same till Tuesday and that had it not been for the lockdown, air quality would have fallen to “very poor categories.”

In West Bengal, too, certain areas in South Kolkata showed a sharp decline in AQI from Saturday. In Ghaziabad, Uttar Pradesh, PM 2.5 levels increased to a hazardous level and air quality remained poor all morning on Monday. The graph below clearly shows how high the particulate matter concentration in the air is on April 6. The AQI in Ghaziabad had been moderate to begin with, and the antics of people on Sunday just made it wors. 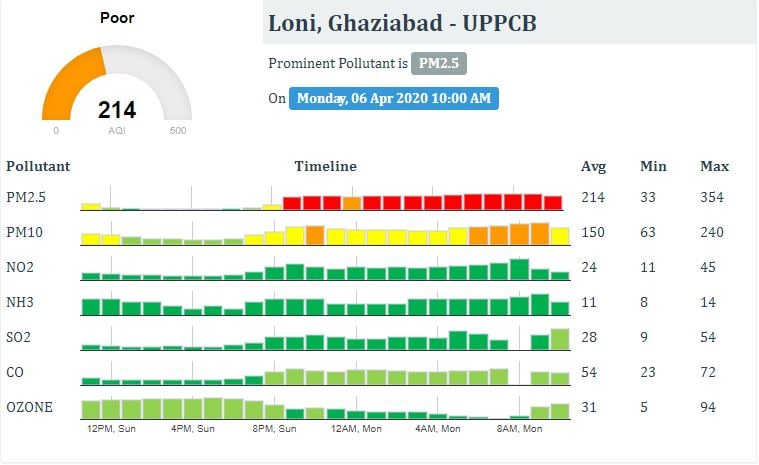 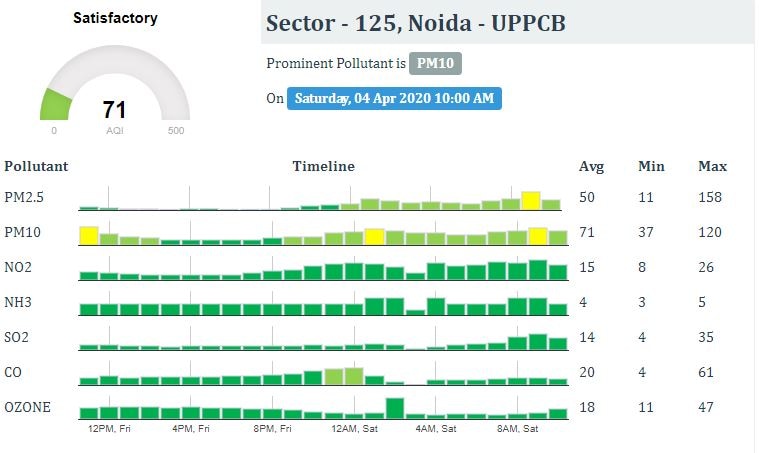 <ahref=”https://www.researchgate.net/publication/235523189_The_impact_assessment_of_Diwali_fireworks_emissions_on_the_air_quality_of_a_tropical_urban_site_Hyderabad_India_during_three_consecutive_years”>Research shows that firecrackers end up causing extensive damage to the environment even if burst for a short period of time. They emit dangerous toxins, metal particles and other hazardous substances which don’t really disintegrate and instead stay in the air for days.

Delhi, in the winter of 2019, saw one of the worst smogs the country has ever seen. But the only silver lining of the pandemic in India was that air quality was finally improving. In fact, it was better than it had been in ages. But clearly, stupidity spreads faster than any virus.