The bride, however said that she deemed it necessary to hand out such a contract to her potential bridesmaids after she saw a lot issues with bridesmaids from newly wed women online.

Being a bridesmaid comes with its own set of heavy-duty responsibilities and while it is good fun to plan the wedding together and assist the bride on her big day, at times the woman of the hour can make things a tad difficult, all thanks to the pressure on her D-day to make everything look picture-perfect. But a to-be-bride recently ended up outraging netizens after she posted anonymously about a long list of 37 bizarre rules she sent out to her bridesmaids to follow.

The list has sparked outrage on social media as the demands have been termed 'outrageous'. The bride, however said that she deemed it necessary to hand out such a contract to her potential bridesmaids after she saw a lot issues with bridesmaids from newly wed women online and thus wanted to ensure she did not face anything like that.

Talking about what prompted her to create the contract, the bride said, "It explained my expectations from beginning to end. "She also posted a photo of the contract which was widely slammed by netizens soon, The Sun reported.

While most of the bride's conditions seem to be taking it a far, a few of the rules have drawn sharper criticism from social media users- one where she forbids her bridesmaids from gaining more than three kilos and 'intentionally' getting pregnant before the wedding. She also goes on to list that the bridesmaid 'will not grow sensitive and angry with the bride because I understand that she has a bossy attitude'. 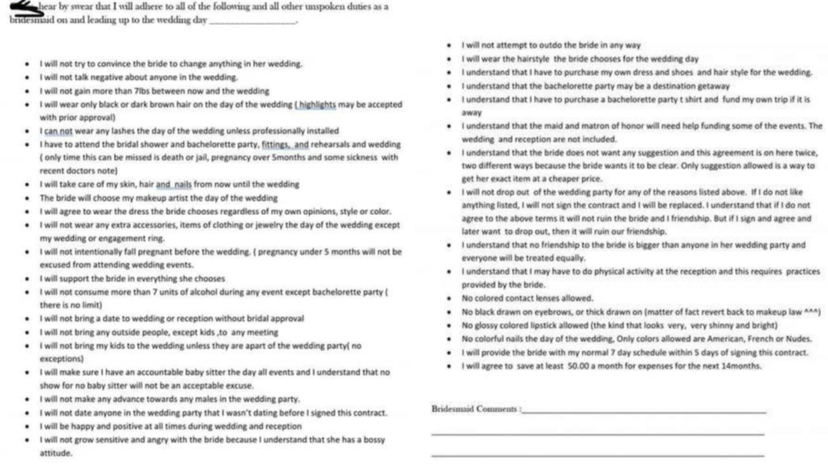 The bride emailed out her list of clauses to her potential bridesmaids. [/caption]

Slamming the bride for the unsavoury demands, one commented, "I would screw this contract up and throw it in the bride's face. What an idiot."

Another said, "Am I reading this right? Just ridiculous. And I can't believe six people signed it."

Many commented that they would definitely not take part in the wedding if these rules are laid out for them.

The list of what-not-to-dos were a lengthy one that included a ban on coloured lipstick, coloured contact lenses, false eyelashes, no coloured nails, hair colour except black or brown, not attempting to outdo the bride among many others.

The bride also instructed her companions against flirting with male guests at the wedding and asked that they remain 'happy and positive' throughout the night.

The bride also demanded that within 5 days of signing the contract, the bridesmaids shall provide the former with their normal seven-day schedule. She also asked the women to save $50 a month for expenses for the next 14 months.

Despite the criticisms, the bride, who has remained anonymous, has gone ahead with the rules she sent out and also said how she ended up having 6 bridesmaids out of the 10 she sent it out to.

"I started with 10, ended with six. I refused to be stressed. I didn't budge on any of it," she added.