A wedding invitation from Tamil Nadu's Salem district is doing rounds on social media has now grabbed the attention of netizens. Here's why.

A wedding invitation from Tamil Nadu’s Salem district is doing rounds on social media has now grabbed the attention of netizens. The sole reason behind the card going viral is due to the couple’s peculiar names that reek of the families’ political adherence.

The wedding slated for June 13 will witness the groom, identified as AM Socialism, tying the knot with the bride, P Mamata Banerjee. The family itself has its own enthralling history of naming their children. Speaking to News18, the father of Socialism, Mohan said he has three sons, Communism, Leninism and Socialism. Mohan’s grandson and Communism’s son has been named Marxism. Feels different right? A.Mohan is the District Secretary of the Communist Party of India. The entrancing wedding will be led by Mutharasan, State Secretary of CPI(M) and Subbarayan MP, State Deputy Secretary of CPI(M). 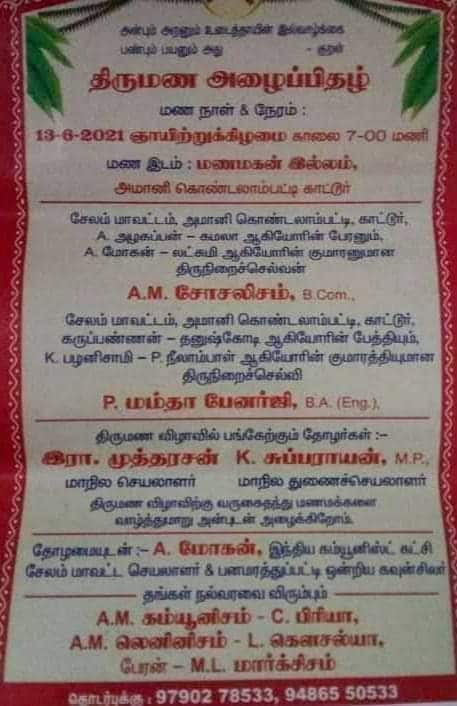 Sharing the otherwise ‘peculiar’ root of their family names, Mohan said, “Our family belongs to Communism. Communism has spread over the Kattur area of Salem about 80 years ago. We have followed Communism right from my forefather’s period and I’m the fourth generation to do so. This particular area in Salem carries many unique (leaders and country) names like Vietnam, Czechoslovakia, Moscow, Russia, etc. The reason that I chose to name my children that weighs communism ideology is when the Soviet Union broke during the ’90s. I decided to name my children with strong communist ideology when my wife was pregnant. So I named my first child Communism. Later when Leninism was born, I was hiding from home for 15 days following a case of a false allegation. And then, we gave birth to our third child, Socialism.” He further added that if it were a girl, then he would have named her Marxia. When asked if his sons are keen Communists, Mohan said, “My sons always stood for people’s rights from childhood and I encouraged them to participate in party meetings right from the age of 5. After growing up, they have actively shared their parts in many protests and they are also CPI(M) members. It was back in 2009 when around 2000 students from Tamil Nadu went to participate in a protest held in Delhi, where Communism and Leninism were among the protesters.” Mohan recalled how he had once struggled to get Communism admitted to a hospital when he was three years old. “After the child specialist got to know about his name, he refused to admit him and we had to rush him to another hospital in Salem. Facing multiple questions. of revolution, we struggled during the admission of my children during the mid-’90s,” he said.

On the other hand, people admired their names during their college days, since the names tried to whip up enthusiasm among the students. Communism is now a lawyer, where he gained respect from Judges mainly because of his name. The place where Mohan and his family reside is circled with families of Communist and Congress for the past 60 years.

Mamata Banerjee, the bride-to-be is from a similar relative circle. Banerjee’s grandfather is a Congressman, who was so inspired by the actions of Mamata Banerjee that he named his grandaughter after her, reports Indian Express.

“My children cannot be bullied for the names they carry. Rather, we are proud to have it. Even Periyar, after returning from Soviet Country (1945-50′), named his children Moscow, Russia.”

Mohan alleges that when people don’t get astonished by names like Palanisamy, Kandasamy, Munusamy in Tamil Nadu, why should they be surprised by hearing names denoting Communist ideology, that has been disseminated all over the world.