By winning thirteen awards, Gully Boy overtook Rani Mukherji and Amitabh Bachchan's 'Black', which was honoured with eleven awards in 2006.

However, not everyone agrees. And one such disgruntled individual decided to make his indignation known by editing the Filmfare page on Wikipedia, labelling Gully Boy's awards as "paid."

From Best Film to even Best Lyrics, it seemed like Akhtar ka time aa gaya. While the film was snubbed at the Oscars this year, the Filmfare awards seemed to make up for it.

By winning thirteen awards, Gully Boy overtook Rani Mukherji and Amitabh Bachchan's Black, which had been honoured with eleven awards in 2006. However, this did not sit well with desi moviegoers, who felt that 2019 saw a flurry of remarkable films like Article 15 or even Super 30, and that these deserved accolades more than Gully Boy.

When i came to know most of the awards were dedicated to #GullyBoy , my expressions were ... shocking to know #Kesari didnt receive a single award.... #FilmfareAward2020, did u get paid from #GullyBoy team? https://t.co/3d8zBPjERz

#GullyBoy took 13 awards at #FilmfareAward2020 ! This is the condition of India, instead of giving any major awards to the creative films like Super 30, Article 15 etc., they are obsessed with one Hardich Film!
How can you expect India to win any Oscar ever#BoycottFilmFare

Is #FilmfareAward2020 was a joke. Many performances in 2019 apart from #GullyBoy deserves huge appreciation.

Even Kesari lyricist Manoj Muntashir found it quite offensive that 'Apna Time Ayega' from Gully Boy got precedence over 'Teri Mitti', a patriotic song from the Akshay Kumar starrer. He wrote on social media, lashing out at the jury, "You failed to honor the words which made millions of Indians cry and care for their motherland. It would be a great disrespect to my art if I still continue caring for you. So here I bid you a final good bye. I officially announce- I won't attend any award show till I breathe my last. Alvida."

Now another frustrated fan has gone to the length of altering the Wikipedia page for Filmfare awards. Wikipedia, owned and supported by Wikimedia Foundation, is a website that is curated and managed by volunteers all across the globe. That means anyone can go and edit the pages. The page for Filmfare awards is a detailed one, and lists the history of the awards, its journey till date and records like most awards won by a single film, most nominations and so on.

After the awards on Saturday, someone had edited the page to list Gully Boy as the film which won the most number of awards, but added "paid award" in brackets. Ouch.

We've attached a screenshot for your reference: 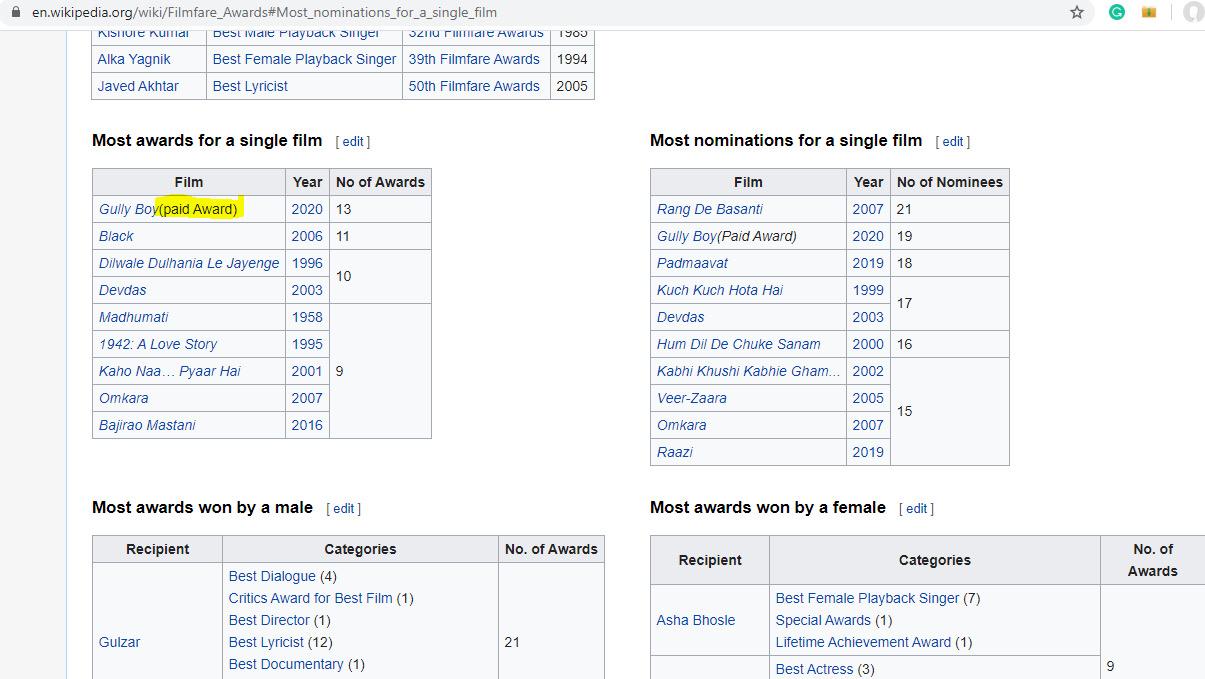