Patriarchy in Garb of Patriotism: Desperate Men Rush to 'Find' Kashmiri Girls After Article 370 is Revoked

Is this patriarchy slyly disguised as patriotism?

The tension and paranoia that had been building up in Jammu and Kashmir over the weekend finally reached its culmination point when Home Minister Amit Shah announced on Monday that Article 370, which granted special status to the state, would be revoked. Unsurprisingly, for many Indians, the meaning of Article 370 and the implications of this controversial law remained ambiguous.

To summarise, Jammu and Kashmir will no longer have a separate flag; Indians from around the country will now be able to buy property and land and permanently settle in J&K. A separate UT (Union Territory) will be created for J&K, with legislature.

However, a quick glance at what social media has to say about the law will tell you that revoking the Article has simply offered some Indians a bizarre sense of entitlement - for some, the law basically means that they have the "right" to anything and everything that is Kashmiri. Including women.

We aren't kidding, Google trends have proof. Searching for Kashmir on Google will show that an increasing number of Indians have been searching for "Kashmir girl pic" in the past twenty-four hours. And Kerala seems to be topping the list. In case you don't believe us, here's a screenshot: 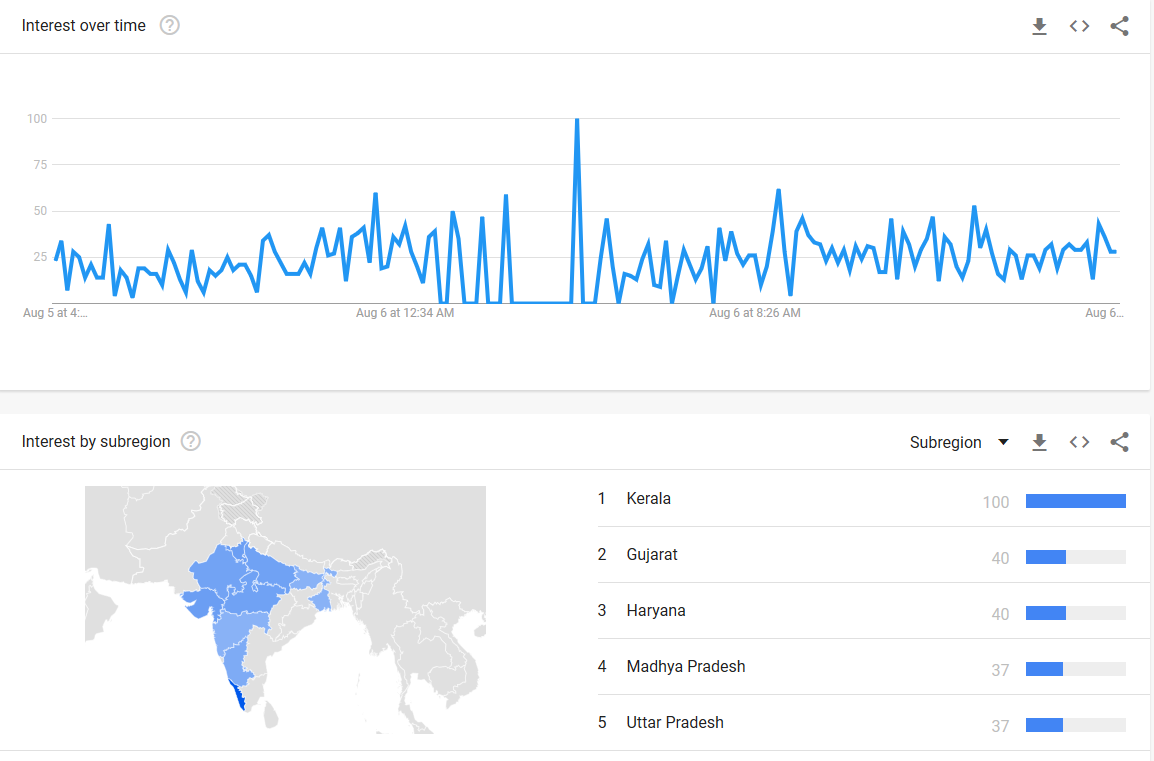 According to a Twitter user named @simplyirfan, "guys from all over India are now looking for Kashmiri girl for marriage and want to buy plot/house/property in Kashmir."

As per real-time google trends in India: Guys from all over India are now looking for Kashmiri girl for marriage and want to buy plot/house/property in Kashmir. After the scrapping of Article 370, Don't know why paid News media is hiding this massive information.#370Article pic.twitter.com/bN4DSOpMxV — irfan (@simplyirfan) August 6, 2019

Now while there has been a surge in misogynistic posts online which reek of objectification, we are wondering who told these men that women in Kashmir were banned from marrying non-Kashmiri men in the past. The only thing that changes with revoking of Article 370 is that while they could not inherit their family's property, that won't happen anymore.

But what does that have to do with desperate Indian men scurrying to find wives from Kashmir? Also, the irony here is startling. In most tweets and posts, Indians seem to be equating property with women. In short, women in Kashmir are once again being silenced, without a choice in the matter.

In his speech on Article 370, Amit Shah claimed that the clause was "anti-women" and Finance Minister Nirmala Sitharaman emphasised on how the law would improve the status of Kashmiri women and empower them. But as trends show, things don't quite seem to going as planned. Surely, women being treated as objects you can just "obtain" couldn't have been what the BJP intended when they introduced the bill. As a matter of fact, their plight remains the same. They continue to remain bound by shackles of patriarchy, albeit, a different version of it.

Take a look at some of the tweets we came across:

Me and my boys on the way to marry some kashmiri girls pic.twitter.com/vuCEKQxrrq — Utkarsh Dixit (@utkarshdixit__) August 6, 2019

Not just Twitter, we came across extremely objectionable videos on TikTok as well. In one of the videos, the TikTok user seems to be rejoicing the passing of the bill since he'll be able to get a "sasuraal in Kashmir." In another, @choudhary_ankit_singh, a TikTok user has posted posters of films with titles like "Bahu Kashmir Ki" to express what the bill means to him.

In India, irrespective of what happens, women turn into objects. It is alarming how "Kashmiri women" or "how to marry Kashmiri women" were the top searches on Google, even as thousands of innocent Kashmiri citizens remain stranded, stripped of a voice in a matter that affects their lives. Ironically, most of the TikTok videos or Twitter posts contain slogans like "Jai Shree Ram" or "Vande Mataram." Is this patriarchy slyly disguised as patriotism? We think so.