A new PETA campaign against the use of leather products seems to have missed its mark on Twitter | Image credit: Twitter

Animal rights group PETA has always been known for using shock tactics to make their point. A new billboard campaign that the group has launched, however, seems to have netizens scratching their heads.

With Raksha Bandhan coming up, brands have already started coming up with marketing and ed campaigns revolving around the festival. PETA seems to have joined the bandwagon with a rather strange message. "This Raksha Bandhan, protect cows too," PETA wrote on Twitter while introducing their new billboard campaign which features a cow seeking protection and asking humans to "go leather free".

Such posters have been put across various cities including Ahmedabad, Bhopal, Chandigarh, Jaipur, Kanpur, Patna, and Pune. 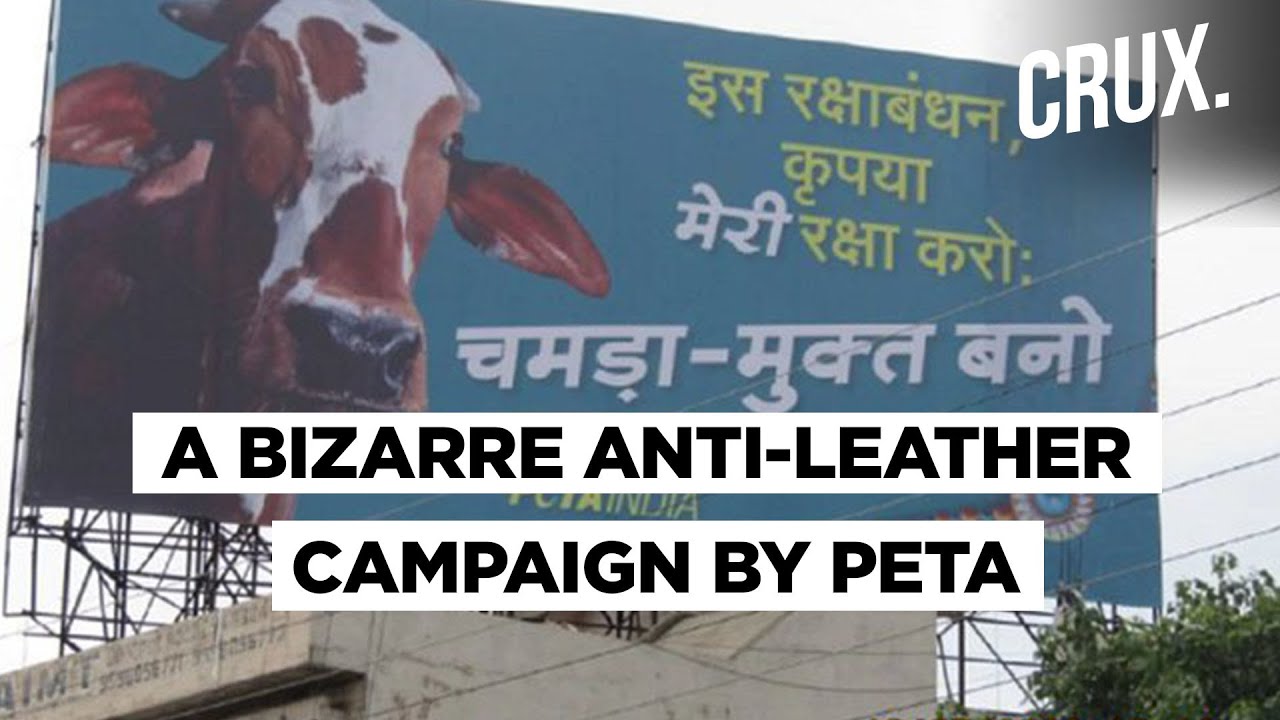 "We aim to raise awareness of the cruelty that cows, buffaloes, goats, and other animals endure before their skin is turned into shoes, bags, and other accessories," the rights group said in a blog post.

The campaign has, however, raised some eyebrows with many wondering why it had to be hinged with Raksha Bandhan. Many on Twitter pointed out that Rakhis - the string that women tie around the wrists of their brothers on Raksha Bandhan - were seldom made of leather.

First of all we don't need any special day to protect cows. Second leather is not used in Raksha Bandhan. It is because of these stupid behaviour people don't take @PetaIndia seriously. You all know that no leather is used in Rakhi but still you have to target this festival.

Leather Rakhis ? Never heard of them. But I know of LEATHER BAGS, WALLETS, BOOTS , JACKETS, BOOK COVERS, BELTS,and more. But these are not pertaining to My religion alone and hence won't fit your agenda and will never be heard in big hoardings ever. #PETA @PetaIndia — positivitea (@bubbpowerpuff) July 16, 2020

PETA, however, clarified, that it never said Rakhis were made of leather but rather requested people to extend the spirit of "protection" (Raksha) that is celebrated on this festival to cows also.

We didn’t say rakhis are made of leather. We said Raksha Bandhan is a good day to extend protection to cows who are our sisters under the skin by taking a pledge to go leather-free, for life. That’s a message all kind people can get behind. https://t.co/qoVkRQe5DT

Taking to another subsequent tweet, PETA said, "It's simple: Cows need protection. Raksha Bandhan is a great day to extend protection to our sisters in the animal kingdom by pledging to go leather-free for life. The outrage is better directed at this violence, rather than at a message of kindness."

It's simple: Cows need protection. Raksha Bandhan is a great day to extend protection to our sisters in the animal kingdom by pledging to go leather-free for life. The outrage is better directed at this violence, rather than at a message of kindness: https://t.co/b6vzTBogsS

Nevertheless, using Indian festivals to promote "cow protectionism" - a culturally and politically loaded discourse in India to begin with - is rather confusing. A pledge to go leather-free on Raksha Bandhan makes little sense as nothing that is used on Raksha Bandhan has much to do with leather products. Or cows.

While PETA has previously been known to make spot-on if rather shocking campaigns to promote vegetarianism and the anti-leather movement abroad, the rights and advocacy group might need to fine-tune its understanding of Indian culture and society to come up with more effective messaging.