After the premiere of 'Game of Thrones' Season 8 Episode 1, Indians were struck with a very pensive question, and no - it wasn't about Bran.

At 6:30 AM on April 15th, 2019, a lot of Indians were awake and staring at their computer or television screens. It wasn't an emergency broadcast announcement, or an address by the Prime Minister. The reason? Game of Thrones season 8 just premiered.

GoT just released the first episode of the final season, and fans are going crazy. While the show airs on HBO originally, Indians have the option of streaming it on Hotstar as soon as it releases - at 6:30 AM. And that's exactly what Indians did.

Winter is finally here, and along with it is the Night King's Army of the Dead rapidly marching into the land of the living in order to take control over the seven kingdoms. While the episode may have spurred memes, jokes, and a lot of spoilers on the Internet for everyone, it also spurred some questions. Very specifically for Indian audiences of the show, the question was: 'Who is Priyanka Chopra's Sister-in-Law in Game of Thrones?'

While the question may not be phrased well, it meant, which character is played by Priyanka Chopra's sister-in-law, Sophie Turner? (Answer: Sansa Stark.)

This question was actually one of the most searched terms along with Game of Thrones in India, as people struggled to find which one was Sophie Turner. Priyanka Chopra had taken to Instagram to share an image of Sophie sitting on the Iron Throne as Sansa Stark, the Lady of Winterfell, ahead of the premiere and wished her luck.

Good luck @sophiet you are a boss babe. And are very loved.. #jsister #gameofthrones tonight

Their next query, was related more to the episode: 'What are white walkers vulnerable to?' (Answer: Dragonglass and Valyrian steel.) 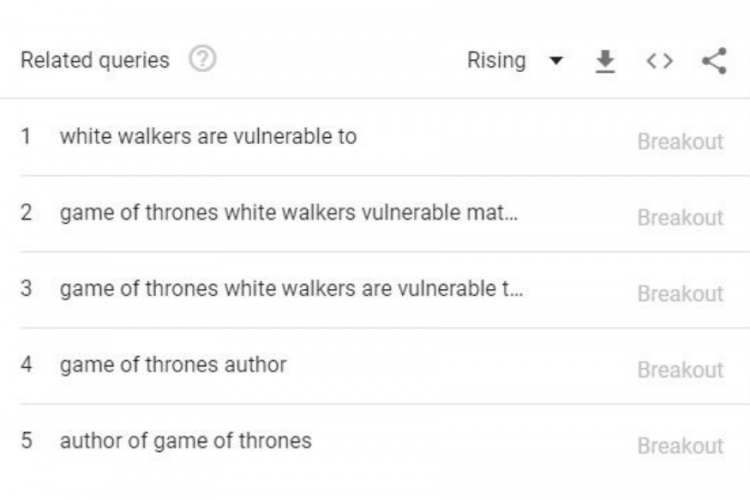 The reason behind this Google search? The white walkers in this episode.... just kidding. No spoilers for people who haven't seen the episode yet. All we'd like to say is, well, Winter is here.

The episode has also spanned memes, especially ones on Bran, and left Indians with one more prominent question which they didn't search for... what happens in the next episode?