Home » News » Buzz » Public Service Announcement: There Is Now a Way to Get Rid of Fart Smell
1-MIN READ

Public Service Announcement: There Is Now a Way to Get Rid of Fart Smell

It does look like a product that is much needed in this age of ever increasing pollution.

The world never fails to surprise you with new forms of weirdness and oddities. Case in point: a product that gets rid of the painful odour of flatulence. Yes, we now have fart neutralizers in our universe.

While there may have existed products like this from sometime, this seems to be the first of its kind in India. A company called 'Greenfinch Textiles Pvt Ltd' has come out with 'GON' or 'Gas Odour Neutralizer'.

They even came up with a bunch of a ads for it in different languages. And those ads looks a little 'sketchy'; by that we mean they look more like spoofs of something. What doesn't help this notion is that fact that these videos were launched on April 1st, a day where everyone comes up with fake products and news items.

But if this is a prank, they've played quite the long game. Not only do they have a Facebook page and a Twitter account, they also have their product listed on 'Ebay', and the page claims that they have sold 20 of these so far. 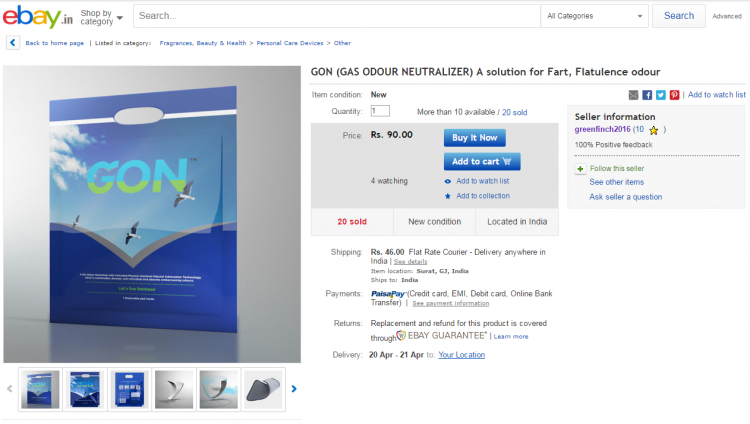 Whatever be the case, it does look like a product that is much needed in this age of ever increasing pollution. Watch the ad and feel visibly confused about its authenticity.