Home » News » Buzz » Remember Photo of Shirtless Flagbearer from Palestine? He May Have Been Shot by Israeli Forces
1-MIN READ

Remember Photo of Shirtless Flagbearer from Palestine? He May Have Been Shot by Israeli Forces

A few days back, the image of A'ed Abu Amro protesting shirtless with a Palestinian flag while wielding a slingshot became viral.

A few days ago, the image of a fiery, young, shirtless Palestinian rebel wielding a flag of Palestine in one hand and a slingshot in the other at an Israeli blockade went viral across social media. Many hailed it as a symbol of Gaza’s resistance of Israel. Now, it appears that the protester, A’ed Abu Amro, has been shot.

According to reports, the young protester who recently became an international icon of the Palestinian protests against Israeli occupation was shot. However, according to social media reports, it seems Amro is still live. 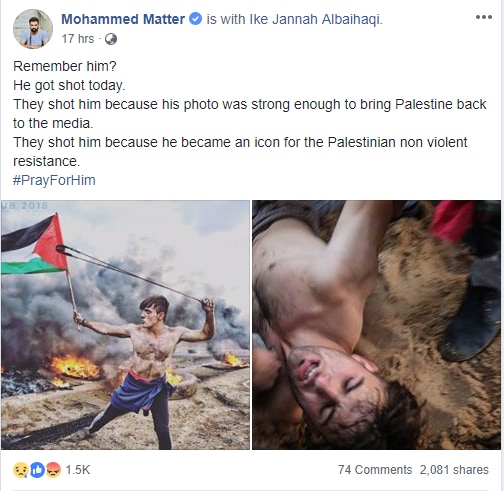 The previous photo, which had been taken on October 22, had been compared to the iconic Eugene Delacroix painting of the French Revolution, Liberty Leading the People.. It had been taken by Mustafa Hassouna of Turkey’s Anadolu Agency. Amro is in his twenties. According to a report in Al Jazeera, Amro lived in the al-Zaytoun neighbourhood and participated in protests every Friday and Saturday with his friends.

In a Facebook post, the user named Mohammed Matter who shared the images of Amro after being shot claimed that the protester was fine. However, he asked people to pray for Amro’s the well being. Social media came forward in support of the protester, whom they hailed as a hero.

His iconic photo went viral a week ago, and today he’s one of injured protesters in Gaza.

He’s simply asking for his basic rights in Gaza. pic.twitter.com/QNqfKIXFi8

The injury of iconic Palestinian flag bearer Ayed Abu Amro during the naval march on the northern border of Gaza in protest of Israel’s blockade of the Gaza Strip . pic.twitter.com/v7q8mvFwsH

Remember this outstanding photo which drew global acclaim? Out of control Israeli snipers are having none of it and have carried out a revenge shooting on this young Palestinian man from Gaza. https://t.co/gK4Hbrjbq9

The reason for the shooting remains unconfirmed.