Seen the Horrific Photos of Bengal's Destruction in Cyclone Amphan? This is How You Can Help

More than 14 lakh people in Kolkata have been living without electricity since Wednesday night.

Cyclone Amphan which made landfall on Wednesday has caused mass-scale destruction in West Bengal and coastal areas of Odisha.

Soon after the cyclone hit, electricity and mobile phone services were interrupted, with many photos surfacing on social media showing the sheer scale of destruction which was caused by the natural calamity.

The fiercest cyclone to hit Bengal in 100 years destroyed mud houses and crops, and uprooted trees and electric poles.

West Bengal Chief Minister Mamata Banerjee, who has been monitoring the situation at state secretariat Nabanna since Tuesday night, said the impact of Amphan was "worse than coronavirus".

Kolkata Mayor Firhad Hakim said more than 14 lakh people in the city are living without electricity since Wednesday night. "The entire city has been devastated. Around 4,000 trees have been uprooted in Kolkata. We are short of staff due to the Lockdown. It will take some time to restore normalcy," he said.

Packing heavy rain and winds with speeds of up to 190 kmph, the cyclone barrelled through coastal districts of North and South 24 Parganas of Bengal and Odisha on Wednesday unleashing copious rain and windstorm.

According to initial estimates by the West Bengal government, Amphan has caused a loss of at least Rs 1 lakh crore. The state, already reeling from revenue loss due to Covid-19, has asked the Centre for financial help.

Meanwhile, there has been no specific report on the amount of destruction Bengal has faced, while photos from the state paint a devastating picture. 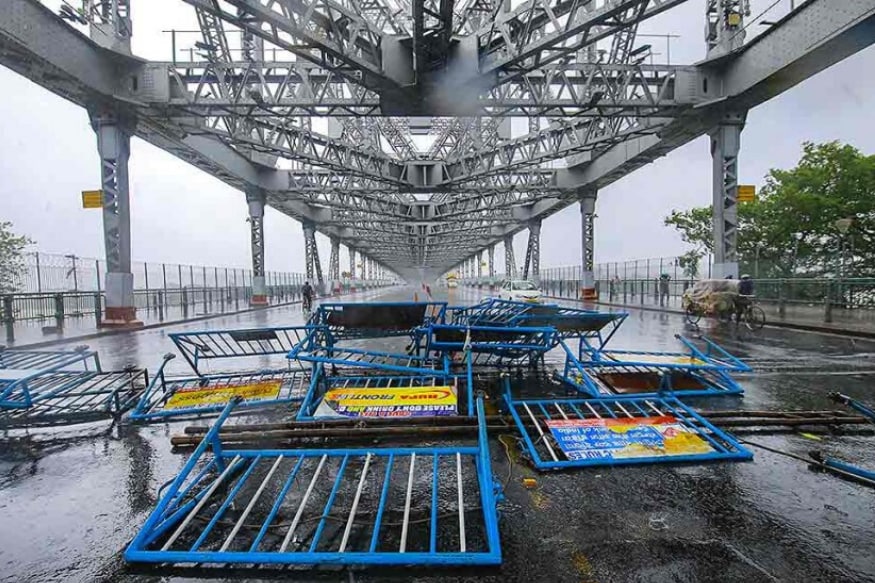 Here's how you can help:

Human beings stand by one another - this is a very simple statement regarding our civilization, but very often we find this statement difficult to believe. But the situation created by the hspread of the pandemic and subsequent lockdown has made it slightly easier to believe. The students of Bengal have been trying to stand by the general citizens across districts in the state. Among various initiatives that have come up, there is a network - Quarantined Student-Youth Network. Through 26 People's Kitchens, we have been able to provide cooked meals to almost 100000 people and rations to approximately 9000 families in close to 360 villages . This network has not limited itself to Bengal and has been working across Delhi, Mumbai and Hyderabad as well. We have tried to deliver rations worth two weeks to more than 8500 migrant workers. Now we are committed to stand by as many cyclone affected people as we can! The devastation of "Amphan" has disrupted the lives of people who have lost so much because of the lockdown. Over the last few days, we have tried to understand the situation by contacting residents of Sundarbans and West Medinipur, particularly those who live near dams or water bodies. The problems differ from area to area. The roofs of more thousands houses in a village have been blown away. In areas adjacent to water bodies, salt water has flooded agricultural land and ponds. The government centers that have been demarcated as shelters are already serving as quarantine centers. The after effects of Amphan will only serve to increase the burden on them. It is imperative to stand by people in these areas through medical camps and People's Kitchens and supply of essentials. This is an open call to all, no matter where you hail from - village, town or city, please take up your own initiatives. Fill up this Google form https://forms.gle/9ZDRiLe2AQC2dZAj7 to lend a hand to our Network. For those of you who want to contribute financially please find the banking details attached. We need funds now more than ever. Stand by us so that we can stand by all. Let’s rebuild Bengal, not for a few, but for all! ✊🏼

In case you are looking for an easy way to contribute to the West Bengal State Emergency Relief Fund from outside India , this is one is managed by Yale South Asian Graduate Students' Association.

This is the state government's official relief fund.


Contribution to this fund entitles you to claim 100% deduction under section 80G of the Income Tax Act.


Jadavpur Commune, run and supported by JU students, research scholars and alumni, has been operational since before the national lockdown started, manufacturing sanitiser and disinfectants, and distributing them in and around campus to guards, civic volunteers, delivery personnel, etc. Their community kitchen, running since the beginning of the national lockdown, serves hot lunch to over 600 people daily in the Jadavpur, Dhakuria, Golpark and Charu Market areas. They also distribute rations to migrant labourers and the homeless.

EA has been working in the Sundarbans for several years now, particularly with women and the student community in Bali. Now they are organizing relief for these areas. For helping women in Piyali of Canning block and Bali of Gosaba block mainly to rebuild their homes and also to support education of students who may otherwise drop out of schools. Tansfer is only possible from Indian bank accounts, here.


Swasthya Shiksha Nirman was engaged in providing relief to the unorganised workers of Halisahar-Naihati, Kankinara, Duttabad and Bagmari, when AMPHAN hit West Bengal.

You can contribute at these bank details: