National carrier Air India took a direct dig at Indigo Airlines over the incident in their latest ads.

A shocking video showing two IndiGo Airlines staffers pinning a flyer down to the ground and thrashing him spread across social media like wildfire over the last 24 hours.

The drama unfolded on October 15 when 6E 487 flew into Delhi from Chennai. The flyer, Vinay Katiyal, and staff members argued over something before entering a scuffle. Katyal could be seen muttering his way through these staffers to a bus waiting for him to board it. One of the staff members, visibly annoyed, behind him, took offence, asked the bus to move and his colleague not to let Katyal get on it.

In the video, Katyal is asking the staffer, "How dare you touch me?" Katyal, then, grabbed the staff member by his lapel, and the two people got involved in a fistfight.

Other staff members appeared extricating the two people but to no avail.This forced the airline and its CEO to apologise.

National carrier Air India, however, took a direct dig at Indigo Airlines over the incident in their latest ads. One of the ads featured an image of the iconic 'maharaja' and a line of text that said: "We Raise Our Hands Only To Say Namaste".


The other ad features a logo of the airline with the slogan "Unbeatable Service". The first ad has since been taken down.

This is a snapshot of the ad that was later deleted. 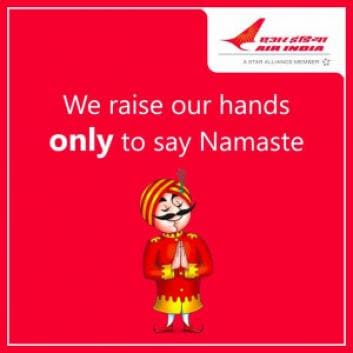 Earlier today, after Indigo incident went viral, the airline's rival Jet Airways found themselves dragged into the controversy as a fake picture masquerading as a Jet Airways' campaign started doing rounds on the Internet. As it turns out, the ad was a fake. Taking to their official Twitter account, Jet Airways was quick to issue a clarification.

Jet Airways did not commission the creative being shared on social media platforms, in context of a recent event concerning another domestic airline.

The creative does not reflect our philosophy and ethos and is in fact, in bad taste.

As Air India's tweet started circulating, needless to say, it created waves across social media and people on Twitter not only appreciated this opportunistic advertisement but also came up with jokes of their own:

Tagline of our airlines :

When Mom catches me and my brother fighting pic.twitter.com/nidjP3sODp

However, there were also those who did not agree with Air India's 'clever' ad:

Chance pe dance, @airindiain? I found this in poor taste, however clever it may seem. pic.twitter.com/QFYAWRdyP4