Sia Mixes Up Nicki Minaj and Cardi B in a Series of Bizarre Twitter Goof-Ups, Apologises Later

It began with a tweet from a fan of Sia asking her if she would ever consider collaborating with Nicki Minaj.

It began with a tweet from a fan of Sia asking her if she would ever consider collaborating with Nicki Minaj. The fan posted Minaj's photo too. But Sia mixed up the two artists and mentioned Cardi B in her reply. 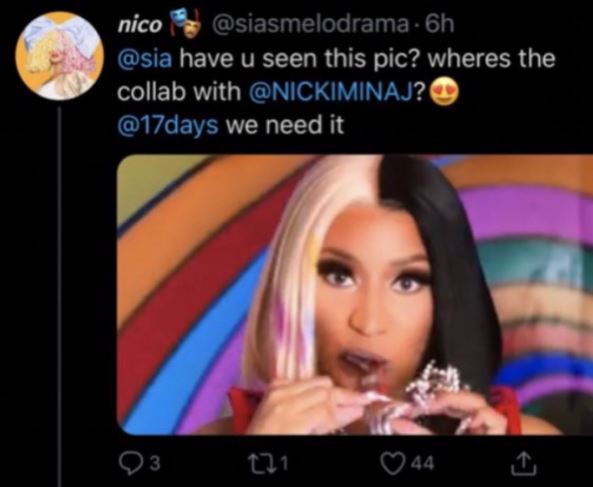 "I love @iamcardib and although this isn’t a collaboration, I would love to COLLAB with her any day! (sic)"she wrote. To many, this was a case of 'casual racism' It also added fuel to the existing skirmishes between the two artists. Sia did realise that it was a mistake and tweeted. “My fuck up,” she wrote in her next tweet and and tagged Minaj. But this tweet only meant another episode of goof-up. “Dudes. I also like @MissNikkiiBaby I don’t give a shit about feuds, George Floyd was fucking murdered Breonna Taylor. Murdered. Come on let’s rise in unity. You think @iamcardib and Nikki are so petty that they would want you focusing on a silly feud instead of REAL NEWS?,” she wrote.

But Sia tagged the wrong person as Minaj and soon, #SiaIsOverParty started trending on Twitter. However, she wrote another tweet and tagged the two artists (thankfully the right ones) and said that the ore pressing issue was 'systemic racism'.

“Hey @iamcardib @NICKIMINAJ you aren’t thinking about a feud right now are you? We are focused on the problem of systemic racism,” she wrote. But her tweet which came as a random lecture to two black women on racism faced backlash.

No @Sia, YOU are focusing on the problem of systemic racism. Black people are trying to decompress and have lives outside of the system of racism. Please continue to focus on your issues and we will focus on ours, thanks. https://t.co/wKZXBpKDXS— Six #FUBUSpiritualist✊ (@BlackWomenCry) June 13, 2020

She later apologised saying she had misunderstood the tweet.

I totally misunderstood a tweet earlier that has resulted in me making a buffoon out of myself.Sorry @NICKIMINAJ and @iamcardib if you hear about it.Can I just like you both?— sia (@Sia) June 13, 2020