Did you ever think you'd get to watch the speed of light filmed in a video in this lifetime? Science, yeah!

Light is the fastest thing we as the human race know of. And it travels in a vacuum at 299,792,458 metres per second. That's pretty damn fast.

But thanks to the geniuses at The California Institute of Technology, a hi-tech camera has been developed that uses the method called compressed ultrafast photography (CUP), which can capture the speed of light. Bonkers, right?

Gavin Free (Gav) and Daniel Gruchy (Dan), popularly known as The Slow Mo Guys on YouTube, recently filmed the mindnumbing footage of light in an episode of the new series - 'Planet Slow Mo'.

In the video, Postdoctoral Scholar Peng Wang, who operates the "world's fastest camera" called T-Cup, demonstrates how a beam of light travels using the high-speed camera.

In the first experiment, Wang uses a bottle containing diluted milk and a laser beam to document the speed of light at about 100 billion frames per second. At this rate, the light takes approximately 2000 picoseconds to travel the length of the bottle. A picosecond is 0.000000000001 or one trillionth of a second.

"We are just casually watching this light go left to right through the bottle but in reality, the light is travelling a million times faster than bullet," reminds Gav.

For the next experiment, Wang uses the 'chaotic cavity' with mirrors that can bounce the light entering it, thereby trapping it. Here, the camera captures the 1 femtosecond of a laser beam at 100 billion frames per second. 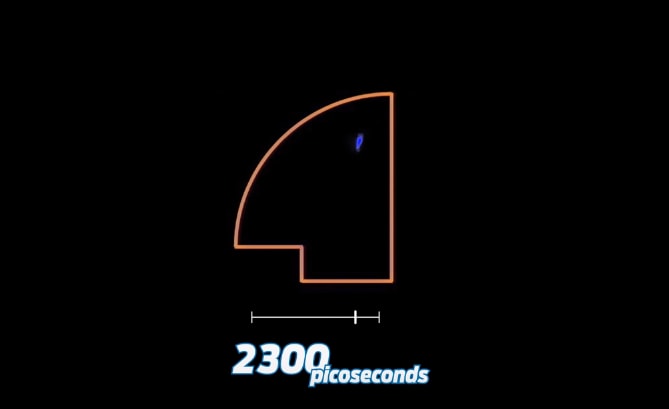 Gav, Dan, and Wang up the ante in the final experiment, recording the speed of light at 10 trillion frames per second. The light travelling here across diluted milk completes one cycle in 50 picoseconds.

The Slow Mo Guys' fans, who have watched Dan and Gav capture extremely fast things in slo-mo in the past many years, couldn't wrap their heads around what they had just witnessed.

"Finally I've seen the speed of light through my own eyes, That's one thing crossed on my to do list," wrote one.

"The fact that im watching the speed of light blows my mind, it seems so unfathomable," wrote another.

"I think Einstein would cry tears of joy if he saw this."

"It's interesting how this is happening all around you so fast you can't even see it. The entire world is just light captured by the eye. Even this comment is just a lightbeam traveling at you at an unimagineable speed. Your entire life experience is just light and sound."

You can watch the mindblowing (and complete) video here:

Gav and Dan also explain in a follow-up video why it is not easy to film light.