The era of diet coke is over, the world has switched to Diet Prada now.

Diet Prada, the popular Instagram account with over a million followers is known for its savage calling out of dupes or designer knock-offs of worn by celebrities and other people. But while policing dubious (or in this case, dupe-ious?) fashion choices is usually its mainstay, the page occasionally also calls out celebrities and influencers on their objectionable activities and promotional stunts.

In a recent post, they took to criticizing several celebrities and influences including Indian actress Sonam Kapoor who attended the MDL Beasts Electronic Music Festival in Riyadh, despite several accusations of human rights violations Saudi Arabia.

The post comes on the day that a court in Saudi Arabia sentenced five people to death for the killing of Washington Post columnist Jamal Khashoggi, who was murdered in the Saudi Consulate in Istanbul last year by a team of Saudi agents.

Quoting a United Nations report that called Saudi Arabia the “world’s worst humanitarian crisis,” Diet Prada shared a collage of the celebrities at the event, and screenshots of people explaining why it was wrong.

The caption also, mentioned that there were "simply too many attendees to name" and mentioned how they were "Cashing big fat checks in exchange."

What’s worse than an all white @revolve influencer trip? Cashing big fat checks in exchange for #content creation (aka propaganda) to rehabilitate the image of Saudi Arabia, a country said to be causing “the world’s worst humanitarian crisis”, according to the United Nations. According to anonymous sources, six-figure sums were offered for attendance and geo-tagged posts. ⠀⠀⠀⠀⠀⠀⠀⠀⠀ Following the government’s pre-meditated murder of journalist Jamal Kashoggi in October 2018 , the arrest of women’s rights activist Loujain al-Hathloul in May 2018, the outing of a gay Saudi journalist and his partner who began receiving death threats from their families (homosexuality is a crime in Saudi Arabia and punishable by death), and countless other human rights abuses, a bevy of supermodels, influencers, celebrities, and musicians convened in Riyadh for the inaugural @mdlbeast . According to @hypebeast , the electronic music festival is “one of the most significant musical events the region has ever seen”. ⠀⠀⠀⠀⠀⠀⠀⠀⠀ Saudi Arabia has been spending billions to change its image in the west, but this is sure to be the most expensive campaign yet. In a series of Instagram stories posted by transgender model @teddy_quinlivan , it was revealed that fellow model @emrata had turned down the trip, evidently aware of the country’s human rights crisis. “It is very important to me to make clear my support for the rights of women, the LGBTQ community, freedom of expression and the right to a free press. I hope coming forward on this brings more attention to the injustices happening there”, said Ratajkowski in a statement to Diet Prada. ⠀⠀⠀⠀⠀⠀⠀⠀⠀ Unfortunately, not all shared the same sentiments. There are simply too many attendees to name. Dieters, feel free to tag any attendees you know of... just in case they haven’t been reading the news. • #propoganda #jamalkashoggi #humanrights #humanrightsabuse #lgbtq #lgbtqrights #freespeech #journalism #independent #womensrights #mdlbeast #edm #electronicmusic #supermodel #influencer #content #riyadh #emrata #emilyratajkowski #teddyquinlivan #model #celebrity #dj #electronicmusic #musicfestival #wtf #smh #government #corruption #dietprada

While Diet Prada did not name and shame her, Sonam Kapoor quoted the post on her story and said “ Let's agree to disagree, let's appreciate that the whole world is a shithole right now and any positive step forward is something that I want to celebrate. I was treated with immense respect and love as a Hindu brown female actor.” 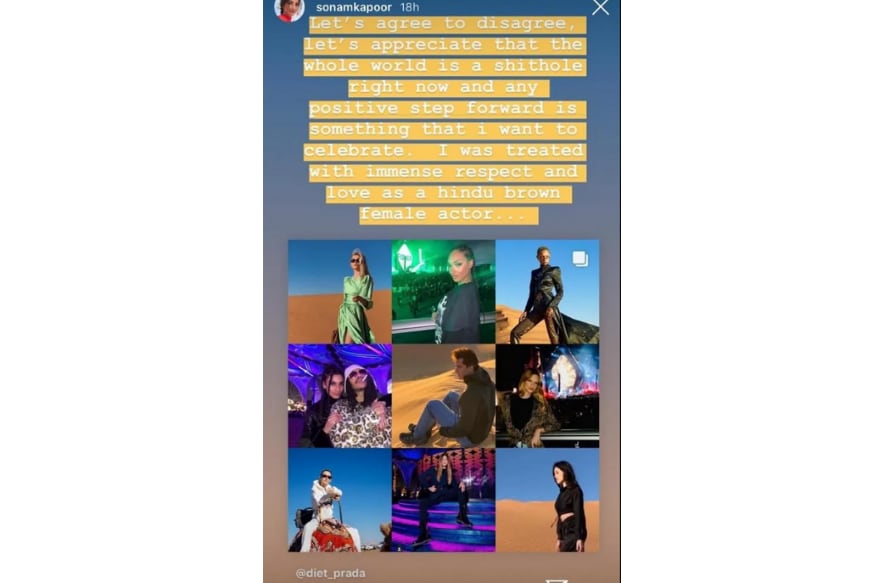 Diet Prada did not hesitate to strike back, quoting how it was "a typical tone deaf response of celebrities who receive 'preferential treatment'" and then shared videos and tweets of people at the event who experienced sexual harassment. They also found a tweet from 2014, where she supported LGBTQ+ rights in India, mentioning how in Saudi Arabia, homosexuality is considered a crime, and in recent times, gay journalists have been detained, because of it.