The 'super sanskari saree' uses satire to make a point about the mentality of victim shaming that exists in India.

Raka Mukherjee
Ever thought your clothes were inviting rape? Of course you did! Society reminds you constantly that rape is indeed your fault!

Recently, a Delhi woman went viral for publicly claiming that 'girls wearing short dresses should be raped'. The comments that the woman made in a viral video started a national conversation about victim blaming and shaming.

Strangely, the woman found many supporters. Of course, short and revealing clothes cause rape, they said.

How can women protect themselves? Obviously by dressing more 'modestly' Many people think that the only way for women to defend themselves against sexual crimes is to simply wear clothes that don't 'invite' rape. Never mind that in the history of the world, people have had no problem violating women's bodies when they had on corsets and farthingales, salwar kameez or burqa. The common consensus always ends at the helm of a woman's dress: The shorter the length, the more likely she is to get raped.

Taking the issue head on, a group of young people have come up with the "Super Sanskari Saree", an answer to all the people who claim women get raped because of their clothes.

Boston-based content writer Tanvi Tandon co-founded a satire website that explores societal 'rules' and perceptions about women's safety and clothing through the lens of sharp satire. The four-member team behind the website includes Anish, a copywriter at BBDO Chicago, Miklas Manneke, Senior Art Director and James Barkley, who is an Associate Creative Director.

Speaking to News18, Tandon explains that it was the video of the offensive 'Delhi aunty' (an equally offensive moniker given to her by disparaging netizens) that prompted her initiative.

"We thought satire was the best way to make this conversation accessible while also highlighting the absurdity of victim blaming and shaming. It adds humour to that mentality, not to the seriousness of sexual assault itself," says Tandon.

And the website's specialty? They create something called the "Super-Sanskari Saree".

As per the product's description on the website, the Super Sanskari Sarees "are made with anti-rape technology and, according to some Indians, will make women invisible to rapists. Protect yourself from prying eyes and unwelcome penises with this ultra-modest collection. Because when there’s nothing to see, there’s nothing to rape".

(Of course, it's all satire. The saree has no external qualities to defend against sexual violence and there is no evidence to suggest that certain clothing prohibit rape, just like a skirt has no inherent ability to 'invite' it)

What happens if you actually 'buy' one of these sarees, though? According to Tandon, the proceeds go towards women's safety.

The 'price' of the sarees are, in fact, suggested donation amounts and websites partnered with a fundraising platform to help collect donations. The proceeds then go to Sayfty, which educates and empowers Indian women and girls against violence. "Channeling the donations through the platform also helped us open up this campaign to a global audience and we've even received donations from outside India," Tandon adds.

The 'Collection' tab of the sarees is even better: It offers you variety. There is the 'Ambitious Naari Office Saree' priced at INR 500, the Sanskari Item-Number Saree priced at INR 100, the 'Sun-skari Beachwear Saree' at INR 200, that suggests that instead of "a two-piece bikini, opt for this one-long-ass-piece yellow ‘biki-nahi.’" 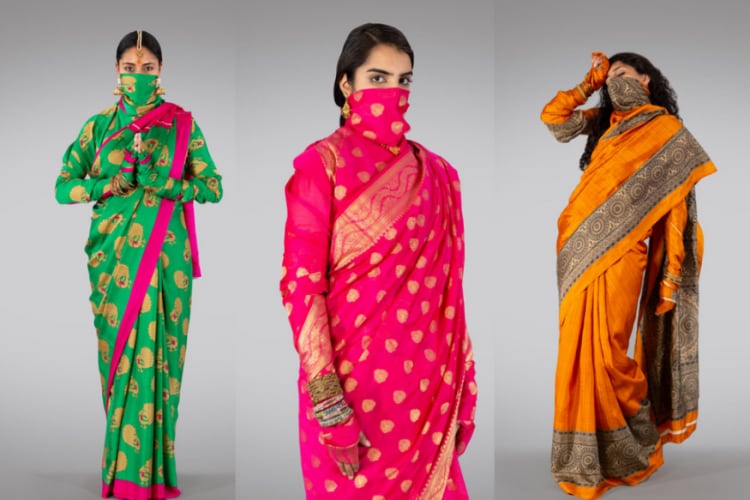 But hey, no problem if you're not the appropriate target-age group to be wearing these sarees, there's 'protective' gear for everyone. Because no age group of women is safe from sexual crimes in India.

"Some of the outfits were directly inspired by comments made by the woman in the video, like the young woman who questioned whether babies and grandmothers also get raped because of what they wear," shares Tandon.

There's the 'Loungewear Saree' priced at INR 50 which emphasizes on the fact that, 'Just because you’re an auntyji now, doesn’t mean you’re un-rapeable!' and the Acchi Bacchi*’ Saree for Kids priced at INR 1000, which points out something important (and dark) - "The worst that your little bundle of joy should invite is dowry, not sexual abuse. Make sure she knows that her body doesn’t belong to her from a young age with this red saree." If the content on the website feels disturbing, it's because it brings to light the harsh culture of victim shaming in India. We need to change the way we dress. But it's not the clothes that need to be changed but the attitude that a person's clothes or appearance has anything to do with an act of violence.

"‘Rape-proof’ clothing for objects who want to be treated like women," is the top header description of Tandon's satire website. Read it again. As much as we really want to call it just satire, is it really that different from the ground-reality in India?
Tags