While the leaders, celebrities, and other popular stars joined the chorus to ban 'Tandav', an Amazon web-series, for allegedly mocking Hindu sentiments, outraged netizens headed over IMDb website to downvote the series.

The scene at the heart of the controversy relates to Zeeshan’s Shiva doing a stage play where he is dressed as Lord Shiva. The sequence talks about how Lord Ram has become more popular today.

Following the online outrage and cries to boycott the series along with the viral hashtag #BoycottTandav, the Information and Broadcasting Ministry on Sunday issued a notice to Amazon Prime. The move comes after several leaders protested against it with BJP MP Manoj Kotak writing to I&B minister Prakash Javadekar seeking a ban on the series for ridiculing Hindu deities.

While the leaders, celebrities, and other popular stars joined the chorus to ban the web series on social media, outraged netizens headed to IMDb website, an online database of ratings of movies and TV shows, and dropped scathing reviews along with poor ratings to express their anger with the show they believe attempted to “mock” and “target” the Hindu deity. 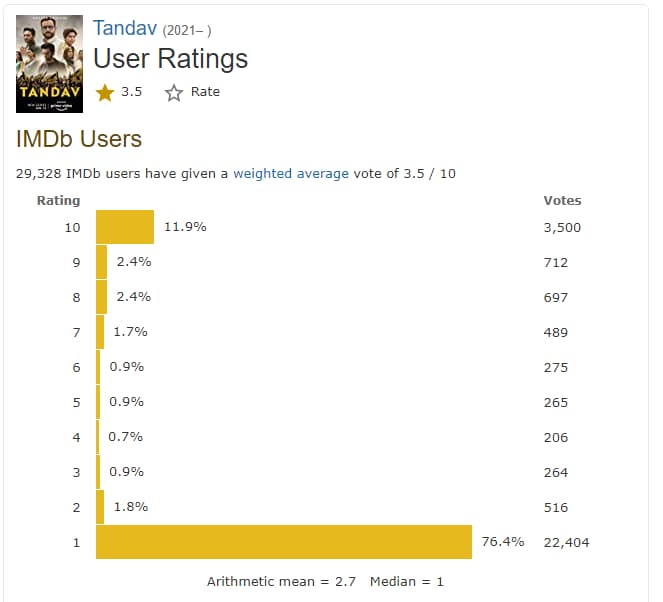 The downvotes were followed by critical user reviews of the show that’s caused an online uproar in the past few days.

“Before first episode ends you’ll realise that this show is full of propoganda (sic),” wrote one irked viewer.

“Poor writing, direction. They are fulfilling their propaganda by showing hindu gods in bad light and insulting Hinduism,” added another.

A similar trend was seen in the subsequent user remarks on the website, with many terming the web-series “anit-national” and leftist propaganda”.

“Total waste of time, it’s all about glorifying and Justifying the riots and leftists narrative. Just Ignore this and move on with some real content.”

“Someone is trying very hard to show politics always in bad light and JNU in a very good light. Again they mocked Hindu dieties for their propoganda. Acting is okayish but the script us very bad and has an agenda behind it not for entertainment but for brainwashing.”

Meanwhile, the Police has assured quick investigation, FIR under Sec 295A of IPC, Section 67A of IT Act & Atrocities Act. Producer, Director, Writer, Actors & Amazon to be summoned soon.