The sanitation sector needs to be made more lucrative, 24-year-old CEO of GenRobotics, Vimal Govind, said.

Despite legislation and widespread campaigning against manual scavenging, the inhuman practice continues in India. But when it comes to solutions, there are practically none. The lack of technological replacement for humans cleaning sewers and septic tanks is the biggest challenge that the country faces.

While the Swachh Bharat Mission has focused heavily on eradicating open defecation by building toilets, it has largely ignored developing infrastructure for improving sewage disposal. According to several activists, the Indian government which has spent heavily on building spacecrafts and acquiring military arsenal has completely neglected the sanitation sector which is in dire need for technological reform.

Currently, the cleaning of sewers and septic tanks is done with the use of jetting and suction machines that use water pressure to clean out sludge. However, suction devices are often incapable of cleaning out blockages in manholes or septic tanks. The same with jetting, which uses the force of water to wash out sewer lines. At these times, it becomes imperative for human beings to enter and clean the clog.

However, some individuals have taken it upon themselves to create sewer cleaning technology that can help replace this need for human beings to enter sewers.

Thiruvananthapuram based start-up called Genrobotics has come up with a robotic innovation to clean sewers. The device is called Bandicoot and it uses an electrically operated mechanical arm that can replace the human hand.

“The main purpose of the machine was to replace the need for human interventions. We wanted to create something that would be as efficient as human hands and eyes,” Vimal Govind, the 24-year-old CEO of GeneRobotics told News18. He added that the ultimate goal was to turn manholes into 'roboholes'. “So many people die inside manholes, some of which are 10 ft deep. These people are helpless and only technology can save them,” Vimal said.

The machine was the result of the efforts of some engineering students of MES Engineering College in Kuttipuram who developed the first prototype of Bandicoot in 6 months. The initial funding came from the Vimal and other's own pockets.

The current version of the Bandicoot developed by Genrobotics is the version 2.5 and it can lift weights close to 200 kg with ease. It can also be operated by humans from outside the manhole to achieve accurate results with existing jetting and suction machines.

Acording to Vimal, the Bandicoot is already a hit. The Kerala Water Authority has agreed to use the robotic machine to clean its sewers. The start-up is also in talks with the Andhra Pradesh and Tamil Nadu governments for the adoption of the machine. The CEO said that it was important for these projects to be taken up by the government as only then can mass scale production of such machines take place. It costs Rs around Rs 14 lakh to manufacture an individual unit of Bandicoot. However, Vimal said that mass production can bring the cost down to about Rs 5 lakh per unit.

While the Bandicoot was the one of the first machines to be innovated for sewer cleaning, it is not the only one. A Bengaluru firm has recently created a set of devices that have the potential to completely clean sewers and even narrow sewer pipes that the Bandicoot can not enter.

Dr K Balakrishnan and Germiya Ongolu, two retired Hindustan Aeronautics Limited (HAL) engineers from Bangaluru, have designed and developed four devices that can detect poisonous gases inside the sewer line, clean blockages and obstructions and even alert authorities in case of an overflow.

The four devices include -

Sewer Croc and Robotic Camera System: A water jet-powered device that cuts through blockages in sewer pipes of varying diameter. The water jet spins the turbine at high speed and propels the device forward along the lenfth of the sewer pipe. The cutting blades of the turbine clears out blockages and sediments. The device has been designed for pipes with diameters as small as 200, 250, 300 and 400 millimetres. Overflow Detection and Lid Opening Indicator: A sensor-based system that monitors overflows inside a manhole and alerts the concerned authority on the event of the same.

Lid Based Gas Detector Module: a device that attaches to manhole lids, assesses concentration of poisonous gases such as Methane, Hydrogen Sulphide, Carbon Monoxide and more that are trapped inside a manhole before opening the lid. Once attached to the lid, it also filters out the dangerous gases out while ensuring zero leakage.

Sewer Line Gas Detecting Amphibian: It can detect trapped poisonous gases inside a sewer line up to a length of 30 metres. The Amphibian is submarine-like device that can travel inside a sewer pipe from manhole to manhole and detect presence of poisonous gases. It has several layers of filters that allow only gases and not sewage to pass through.

Speaking to News18, Ongolu, 60, said that a call from activist Bezwada Wilson, founder and national convenor of Safai Karamchari Andolan urging techies to innovate technology for sewer cleaning got the duo interested. Ongolu who had previously worked as a systems engineer in HAL, joined Balakrishnan's company 'Ajantha Technologies' as the Chief Technology Officer. Balakrishnan had already retired from HAL in 2008 after serving for 338 years as a manager for helicopter design. 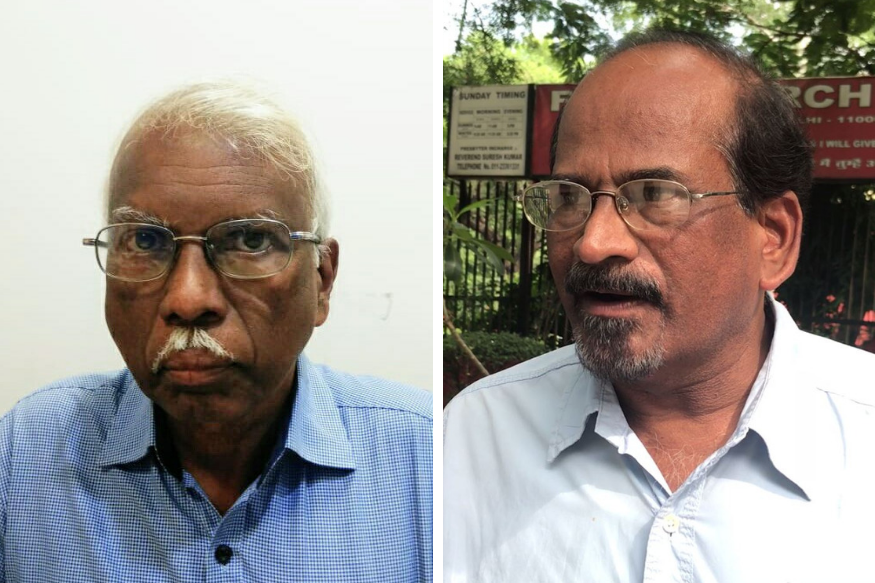 Ongolu added that it was the tech sector's responsibility to innovate in sectors that could help marginalised classes of people. "All developed nations are hinged on development and technologies that aid in welfare. Wilson's call for help moved us and we wanted to do our part so that no more lives are lost to sewers," Ongolu said.

The devices have been tested in Telangana where the government has shown an interest in the Sewer Croc. Similar demonstration will be held in Delhi in October in order to give the device more national attention.

Why has innovation in this sector been slow?

According to faecal-waste management expert Pradip Saha, sanitation has been one of the most ignored sectors of India. Despite sanitation being one of the flagship agendas of the present government, not enough money is being put into the sector.

"The fact that a community of people can be forced into this work for very little money makes authorities lax. While development in the military and space sector is increasing leaps and bounds, the same cannot be seen for sanitation," Saha said. The filmmaker and environmental activist that while 500 lakh toilets had been built under Swachh Bharat Mission, the program did nothing to alleviate sewer or faecal sludge management. "It is not as simple as building a toilet. Providing complete sewage solutions for the eradication of manual scavenging will need state and central governmnets to actually get their hands dirty," Saha said. He also stressed on behavioral-development communication for inculcating a habit of sanitation among the citizens of India, many of whom still refuse to give up open defecation or the employing of manual scavengers to clean dry toilets and septic tanks.

The concern was echoed by Vimal Govind of GenRobotics, who felt that it was high time that the government made the sector more lucrative, especially for innovators. "The fallacy is that sanitation is a cheap sector, that it does not require heavy funding like the other sectors. But that is completely incorrect," Vimal said. Developing sewer cleaning technologies requires highly mechanised manufacturing units that can produce such machines en masse.

(In September, at least ten people died manually cleaning sewers and septic tanks across India, spurring a flurry of protests against the foul practice. This is the fourth part of #WhoCleansYourShit - a series of in-depth reports by News18 on the practice of manual scavenging, the reasons why the practice still exists India despite being illegal.)