Home » News » Buzz » 'Bengali Women Use Black Magic': The Trolls Are Out after Rhea Chakraborty Gets Linked to SSR Case
3-MIN READ

'Bengali Women Use Black Magic': The Trolls Are Out after Rhea Chakraborty Gets Linked to SSR Case

Trolls seem to have begun a hate campaign against Bengali women after Chakraborty her alleged involvement in Sushant Singh Rajput's death.

The tragic death of Sushant Singh Rajput seems to have opened a can of worms on Indian legacy and social media.

While the case which was initially pegged as suicide too several twists and turns. And in a recent turn of events, police are investigating a possible case of money laundering in connection with actress and Rajput's former girlfriend Rhea Chakraborty.

Even as the investigation took its course, Chakraborty was subjected to a media trial and endless slut-shaming. And as if that wasn't enough, online trolls in the garb of 'SSR fans' seem to have begun a hate campaign against Bengali women.

Recently, a Facebook user called Chandrani Chakraborty shared screenshots of messages she had received from another user.

In the messages, the person hurled abuses as Chakraborty who shares her surname with the actress currently under scrutiny. 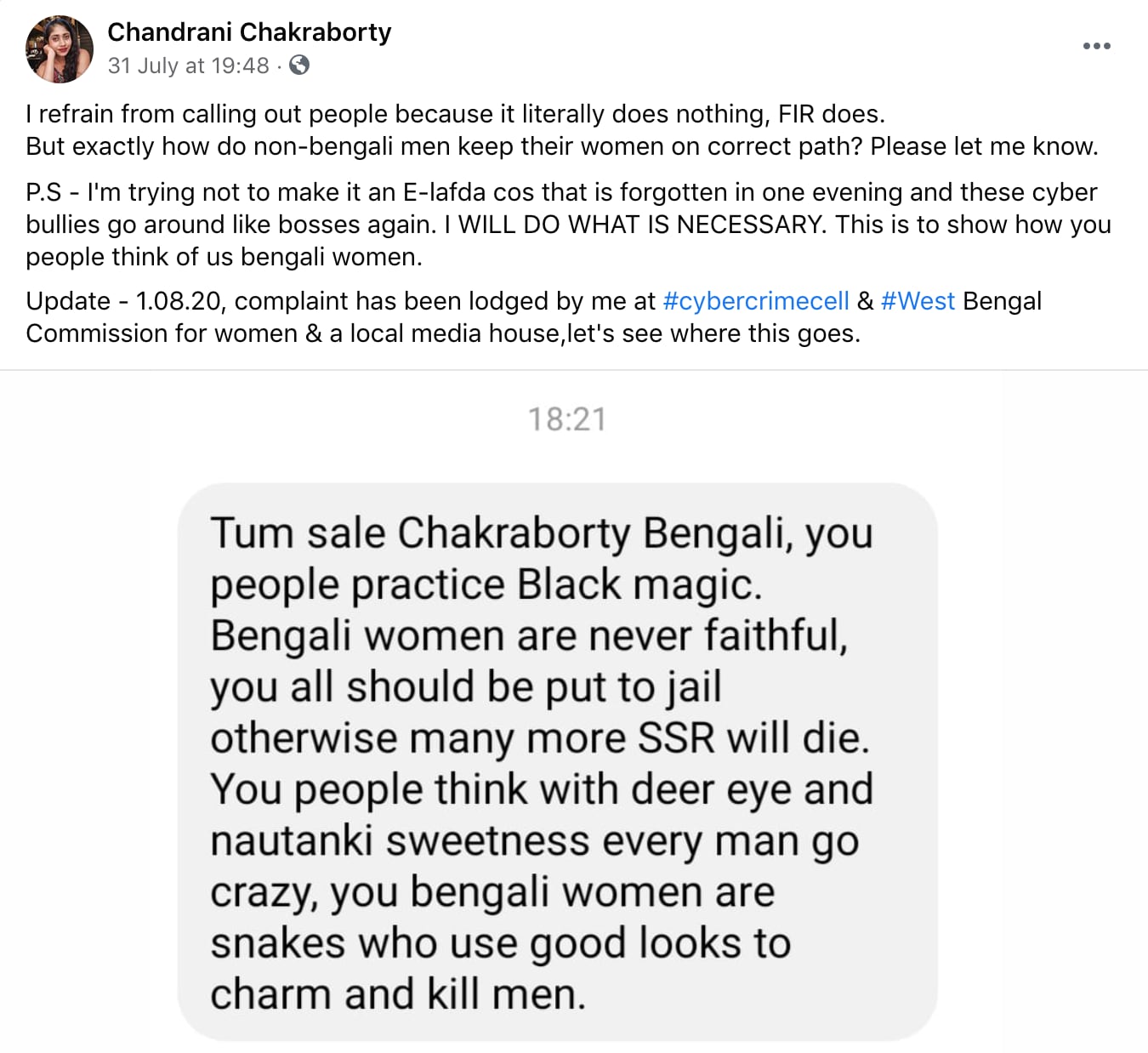 "You Chakraborty Bengali... you people practice black magic. Bengali women are never faithful... you all should be put in jail or many more SSRs will die, " he said.

Sharing the messages online, Chakraborty said, "I refrain from calling out people because it literally does nothing, FIR does.
But exactly how do non-bengali men keep their women on correct path? Please let me know,"

This, however, is just the tip of the iceberg. The news of Rhea Chakraborty's alleged involvement in the death of Rajput has spurred a virtual hate campaign against Bengali women with many on social media accusing them of practicing black magic and being good diggers and worse.

There have been calls to "cancel" Bengali women with many suggesting mass arrests if inncocent women who have no connection to Rajput's death whatsoever. A self=proclaimed men's rights activist Barkha Trehan took to Twitter to share how Bengali girls are "dominating" and how they are experts at "catching big fish" which means entrapping "good looking highly paid guys".

"If you want to be her servant and financer and are okay to leave your family and join her family then go ahead," Trehan further added.

STAY SAFE MEN / BOYS .
Bengali girls are dominating, they know how to make guys fall for them.
They catch big fish, good looking highly paid guys. If you want to be her servant and financer and are okay to leave your family and join her family then go ahead😊😊#RheaChakroborty

It may be a stereotyping but @barkhatrehan16 is right on one point.

Most bengali wives use husband as ATM for their own family they frequently fight with in-laws family on this.

This is a fact.

Women on the other hand responded with jibes and jokes. Many reacted to the "big fish" comments with memes.

The black magic jabs surfaced hours after reports of Rajput's office boy Ram alleging that Reha Charaborty had done black magic on Rajput. Chakraborty was also shamed for a video statement she uploaded recently after Rajput's family's lawyer Vikas Singh made sexist comments on her clothes. "Rhea coming in the video is not much of what she is saying but how she is looking. I don't think she would have worn that kind of a salwar suit ever in her life. This was to show herself as a simple woman," Singh said.

Chakraborty was linked to the case after Rajput's father filed an FIR against six people for abetment to suicide including the Jalebi actress whom he accused of siphoning money from his son's account and blackmailing him.

The actress recently shared an emotional video in which she claimed that she had truth in the judiciary and God and that the truth shall prevail.
Tags: